Being a member of the independent media isn’t all it’s cracked up to be. Sure, like most of the skulking, twitter-addicted, media-day-dwelling shills out there, we here at the Tribune can’t go out in public without having to fight adoring readers off with a tennis racket. But without the steady influx of revenue from the very subjects we’re expected to objectively cover, day jobs, odd jobs, and night jobs sometimes hampers our ability to provide our dedicated readers with the latest breaking news about everyone’s favorite sport in the “Other” section of most general sports websites.

Of course, it is well within your rights to go the usual route for your boxing news fix, or you can always get your news with just the right amount of commentary from someone lacking an agenda. Our very own Jesse Ian Lardies’ Sunday Brunch feature is also a great source for news commentary. So without further ado, let’s dive right into an eclectic mix of recent boxing headlines– some new, some old, all of them broken.

One cannot pay close attention to the matchmaking of Golden Boy’s red-headed step-champion (thanks, Boxing Tribune Editor-in-Chief Paul Magno), Saul “Canelo” Alvarez and feel the slightest bit sympathetic for the most famous fighting 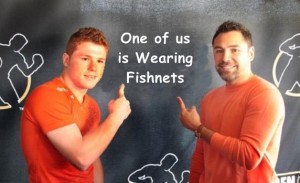 ginger since the bully kid from “A Christmas Story”. The 22-year-old Mexican has been rightfully criticized for his WBC junior middleweight title defenses against under-sized opponents Matthew Hatton, Alfonso Gomez, and Josesito Lopez, as well as his May 2012 win over a spent Shane Mosley. Along the way, however, Canelo has been matched against former three-division champion Paul “The Punisher” Williams, only to have that potential fight scuttled when Williams was paralyzed in a tragic motorcycle accident. His replacement opponent, former WBC welterweight champion Victor Ortiz, then went on to lose to junior welterweight Josesito Lopez only three months before he was set to face Alvarez.

Last Saturday was supposed to be the night future hall-of-famer Miguel Cotto turned back the young, undefeated Austin Trout, setting up a junior middleweight title unification fight (Cotto would have won Trout’s “regular” WBA title, while Floyd Mayweather is recognized as the WBA’s “super”champion). Unfortunately Trout didn’t get the memo, and his handy display of combination punching, ring generalship, and shifty defensive maneuvers were too much for the battle-weary Cotto, who wilted down the stretch. Canelo is once again left without a dance partner for his next outing…or is he?

Golden Boy CEO Richard Schaefer was quoted after the fight as saying Alvarez vs. Cotto is still in play, despite the loss. In the mainstream, Cotto’s stock hasn’t suffered that big of a hit, but the dedicated fans of the sport can see the 32-year-old Caguas, Puerto Rico native is aged far beyond his years, and a brutal beating at the heavy hands of Canelo is in the cards for the once-durable Puerto Rican.

Speaking of duplicitous title belts, which are nearing the number of useless bowl games in college football, isn’t it a bit premature to bestow the “Champion of the Decade” tag upon anyone? We’re only three years into the second decade of the twenty-first century, and here we are with the title already being handed out to the highest bidder. Regardless, the WBO has seen fit to crown the winner of Saturday’s grudge match between future hall-of-famers Manny Pacquiao and Juan Manuel Marquez its “Champion of the Decade”, effectively besmirching the accomplishments of long-time WBO titlists such as heavyweight kingpin Wladimir Klistchko (6 title defenses in this decade), cruiserweight champion Marco Huck (9 title defenses), and even Omar Narvaez (6 defenses this decade, 23 overall). Marquez and Pacquiao have a total of five legitimate WBO title defenses between them in this young decade, not counting Marquez’s interim WBO titles.

The real reason behind this move is a quick grab at a fat sanctioning fee. The WBC modernized the practice of creating titles from thin air, as evidenced by the number of Diamond Titles that have been tossed around since 2009. The WBO is merely keeping up with the Joneses and in this case, beating the WBC to the punch. But if you thought this move was really about a genuine honor, I’ve got some magic beans for sale that you can plant in your back yard to grow a money tree. Or you can just eat them to add five inches to your manhood.

Four years ago the United States broke ground when we elected our first Black President, one Barack Hussein Obama. Four weeks ago a Presidential candidate from the fictional Planet Kolob (read up on it; it’s great) came up short in his challenge to the incumbent Barack Obama, who won a second term. In a move perhaps eclipsing both accomplishments on Tuesday, the WBC elected Jose Sulaiman to an unprecedented tenth term as its President, by yet another unanimous vote, nonetheless. A lot of people – myself included – have legitimate gripes about the American democratic process. But as a boxing fan, the voting system that has allowed the man who has presided over such controversies as a long tenure as Don King’s unofficial silent partner, losing a $30 million lawsuit to Graciano Rocchigiani, and a subsequent structured bankruptcy filing, to remain at the helm of arguably the biggest legitimate boxing sanctioning body since 1975 is an absolute travesty.

At this point it appears likely that Sulaiman will remain at the helm of the WBC until his inevitable death, and possibly past it. A changing of the guard won’t automatically bring with it any real positive change, but I refuse to believe it will get any worse once Don Jose’s heir, Mauricio Sulaiman takes the throne.

In an effort to end this train wreck on a positive note, a snippet in James Blear’s article at Boxing Scene announcing Don Jose Sulaiman’s historic election called attention to the upcoming Boxing World Cup, designed to raise funds for pensions for retired boxers who have fallen on hard times.

You can email Tim at timharrison65@gmail.com, or follow him on Twitter where you can receive real-time updates from a boxing writer on the run from the paparazzi and live-chat with him during episodes of “Here Comes Honey Boo Boo”, at www.Twitter.com/TheTimHarrison.