Bryant Jennings (16-0, 8 KOs) topped off a breakout year Saturday night scoring a highlight reel knockout of Bowie Tupou (22-3, 16 KO) in the main event of NBC Sports Fight Night card from Temple University.  Jennings was performing barely minutes from his home neighborhood and delivered the goods for local fans in the scheduled twelve round heavyweight bout. 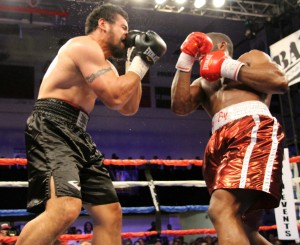 The card was held at McGonigle Hall at Temple University, which used to be a hot spot for local Philly boxing but has not been used in nearly twenty years.  With the Blue Horizon and the Arena closing recently promoters returned to Temple University in North Philly with a card packed with Philadelphia fighters in front of a rowdy two thousand plus fans.

Jennings and Tupou started slow in round one but picked things up in the second stanza producing the hard hitting action that fans expect from a heavyweight fight.  Midway through round two with little going on, one disappointed fan could be heard yelling “someone hit someone”.  It was if both fighters heard and remembered what they were here to do, entertain the fans.  They succeeded in their mission.

Jennings and Tupou began trading heavy shots and kept it up the remainder of the bout.  Each had their moments but the young and talented Jennings seemed to get the better of the action.  Tupou had his best moment in round three when he caught Bryant with a big overhand right that sent Jennings down.  It was ruled a slip because Jennings and Tupou’s feet tangled along the way, but a punch was landed and it should have been called a knockdown.

It never mattered, though, as Jennings took control from that point constantly landing big power punches softening up his opponent for the dramatic ending.  Jennings was pressing the action in round five and had Tupou against the ropes.  Then Jennings showed his maturity as a fighter with a short step back that produced the space to land a massive right hand uppercut.  Tupou went flat onto his back and seemed to be out cold.  He would lay motionless for the majority of referee Blair Talmidge’s count and suddenly bounced up at the last moment.  Clearly in no shape to continue Talmidge halted the action giving Bryant a TKO at 1:37 of round five.

Jennings was elated afterwards soaking up the local crowd.  Jennings was just another prospect at the beginning of 2012 but that has all changed in one year as he is now being looked at as one of America’s best hopes of getting a heavyweight title at some point.  Jennings scored five wins in 2012 including defeating Maurice Byarm and former champ Sergei Liakhovich, all on NBC Sports Fight Night, and the boxing world is taking notice.  Jennings not only gained attention but has greatly improved his technique and learned to use his significant strength to become a knockout puncher that could be a dangerous contender in the years to come.

In the televised main event North Philadelphia’s Eric Hunter (17-3, 9 KOs) took a wide unanimous decision over previously unbeaten Jerry Belmontes 17-1, 5 KOs) by scores of 99-91, 97-92, and 99-90.  Hunter, a long time gym legend with a top notch amateur pedigree finally took that step of putting it all together in the professional ranks by outclassing the talented prospect.  Hunter was too fast and too slick for Belmontes and got the better of the action throughout the ten round featherweight bout. 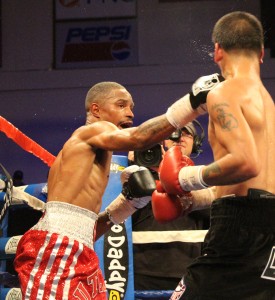 Hunter used a mix of fast-hitting combinations and Floyd Mayweather style shoulder roll defense to befuddle his game but overmatched opponent.  To Belmontes’ credit he never stopped fighting to keep his unbeaten record but his heart simply was not enough.  Often Belmontes stood confused right in front of Hunter who stared hands down at his opponent rolling his shoulder and exploding with rapid punches before moving away to avoid counters.

Hunter showed the local hype that has been whispered in Philly gyms for years about his skills was not a rumor.  Now he needs to avoid the long streaks of inactivity that have plagued his pro career and capitalize on his TV performance.  Indeed fans and media were buzzing after his performance about what the still young Hunter at twenty-six years of age is capable of if he remains focused and dedicated.

North Philadelphia’s Angel Ocasio (7-0-2, 2 KOs) made a successful and impressive return from his two controversial draws against Jason Sosa both earlier this year.  Ocasio took it to his opponent Esteban Rodriguez (6-4-1, 1 KOs) from the get go in the lightweight bout.  Ocasio had complete command, scoring two knockdowns on the way to a TKO win at 2:10 of round two.

Jason Sosa (7-1-3, 3 KOs) was also impressive in his return from the two draws with Ocasio, scoring a TKO at 38 seconds of round two over Issac Suarez in (7-2, 3 KOs) in junior lightweight action.  Like Ocasio, Sosa had complete control landing heavy shots from the start of the fight leading to the quick knockout.

In a showdown of West Philadelphia fighters Todd Unthank-May (6-0, 2 KOs) took a hard-fought unanimous decision over Taneal Goyco (4-5-1, 2 KOs) by scores 38-37 on all three cards in a light heavyweight bout.  Goyco scored a knockdown in the opening seconds of the bout but Unthank-May rallied to control the rest of the fight.

Heavily-touted prospect Jesse Hart(5-0, 4 KOs) from Philadelphia remained unbeaten but failed to score a knockout for the first time, taking a unanimous decision over Steven Tyner (3-9-2, 2 KOs) by scores of 40-35 twice and 40-34.  Hart, the son of former middleweight Eugene “Cyclone” Hart, barely missed making the 2012 Olympic team and has now turned to a pro career in the super middleweight division.  Hart dropped Tyner in the first round and never stopped seeking the knockout, but Tyner was able to survive despite taking a ton of punishment.

In the opening bout Hasan Young (2-1-1, 1 KOs) of North Philadelphia made short work of Josue Rivera (0-2), sending him to the canvas three times.  After the third knockdown the welterweight bout was stopped at 1:52 of round one.