Your columnist has, more than once, been accused of being a “Pacquiao hater”. I’ve also been accused of various gay sex acts with Floyd Mayweather, all of them involving me in the submissive position. While professionalism is called for when I’m writing pieces of journalism like “The Only Preview You Need” (and not for nothing does the editor of this fine publication trust me to write the lead feature during fight week when a major event goes down), when it’s time for op-ed, I think I can safely paraphrase Lieutenant Commander Data in Star Trek: First Contact when I say “To hell with professionalism.” 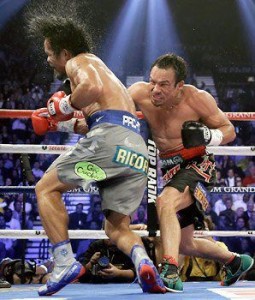 With no recap duties on this particular contest, I was able to watch as a fan. And as a fan, I was rooting for Manny Pacquiao to get his ass handed to him in a way that would ensure that there wasn’t a chance in hell that Juan Manuel Marquez could get robbed on the cards again. I suspected that Marquez was similarly disinclined to dance the same dance after the twelve-round distance and said so in the preview piece.

It wasn’t wishful thinking. Marquez was everything I hoped he’d be, giving an absolutely undisputed Knockout of the Year performance, and indeed perhaps even validating what was otherwise the utterly stupid WBO “Champion of the Decade” belt on the line in the contest. If you’re going to win a title—any title—that’s how it’s done.

How delicious the irony to see Curtis “50 Cent” Jackson ringside, a punk among punks for his little tiff with Money in their “Money Team” misadventure. How delightful to see Jackson look stupid when his charge, Yuriorkis Gamboa, looked like a guy who was more interested in his rapper/manager’s marketing hype than in getting an overmatched opponent the hell out of his ring and going home early. Sure, Gamboa won the fight, but any claim he had on top-ten pound for pound went right the hell out the window.

This was the Haters’ Ball Sponsored by Haterade. Not since every liberal in America collectively lost their shit screaming “Yes We Can!” after the 2008 election results became final has a crowd of people so anxiously awaited a glorious payoff.

Politics, you say? Hey, it’s topical, HBO trotted out Mitt Romney, who fared barely better against Barack Obama a month ago than Pacquiao did against Marquez tonight. If only because this might be the last chance I get to use this joke:
Shortly thereafter, Bain Capital was rumored to be buying out the Wild Card Gym and outsourcing Manny Pacquiao’s entourage to China.

It was beautiful. Sometimes the gods bless us truly, and the past solid month in this sport has been one event after another to remind us why boxing is the greatest of sporting spectacles when everything breaks just right. Sure, the undercard was dogshit, but people do not pay sixty dollars for undercards.

In the past month, we’ve had the sublime Abner Mares-Anselmo Moreno fight, Adrien Broner’s honey of an eighth-round TKO of Antonio DeMarco, Robert Guerrero-Andre Berto (a solid choice for Fight of the Year), Austin Trout’s welcome-to-the-elite win over Miguel Cotto and now Pacquiao’s final undoing at the hands of Juan Manuel Marquez. Five straight weeks with an epic battle of fisticuffs on Saturday. You’d almost think it was 1935 and Damon Runyon was still at ringside with a pen and a notebook.

Let’s see Pacland spin this one. The Manny Pacquiao gravy train is off the rails, gravy spilled like 30,000 pounds of bananas at the end of a Harry Chapin concert, the hangers-on and willing suckers left in the soup line looking for someone else to leech off of. Pacquiao’s alleged heir apparent, Filipino Mercito Gesta, put in a performance so cringe-worthy that when the Boxing Tribune’s Tim Harrison said on Facebook “Back to FNF with you”, I had to object on the simple grounds that would mean I’d have to write about Gesta again. Telefutura, we agreed. Let Paul watch it in Spanish and write that recap his own damn self.

Tell me how my ass tastes, Pacland. This was, from the pure perspective of a fan, and to steal a line from Peter Griffin, “freakin’ sweet.”

Fox Doucette covers Friday Night Fights for The Boxing Tribune. His weekly column, The Southpaw, appears on Thursdays. He always thought he’d be saving this one for a Floyd Mayweather fight that seemed set never to happen. Fan mail, hate mail, and commentary on the irony of a naturally dominant heterosexual allegedly being Floyd Mayweather’s prison bitch can be sent to beatcap@gmail.com.