Assuming the world doesn’t end tomorrow, and possibly even if it does, ESPN2 Friday Night Fights will return in its regular timeslot (which is to say, half an hour after it’s supposed to air because an eighth-grade girls’ basketball game in Duluth ran long) on January 4 for another season of possibly great, possibly awful boxing. This will be your columnist’s third year at the helm of the Boxing Tribune’s coverage of the sport’s equivalent of the NBA D-League, and whether we get a year like 2011 (which was sublime and wonderful and the best slate of boxing on any network 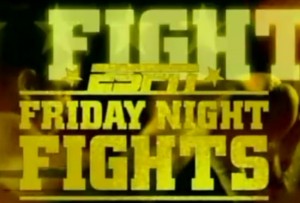 anywhere that year, including providing the world with the Fight of the Year in Pawel Wolak-Delvin Rodriguez I) or last year (which mainly provided your columnist with snark bait for slow news weeks in the Thursday column) remains to be seen.

As to the slate itself, to judge from the names seen on the upcoming schedule on Boxrec, it looks like the ESPN matchmakers called up a “round up the usual suspects” rogues’ gallery to populate the cards. Common opponents and frequent appearances with the same promoters and matchmakers about.

Even though it’s Goossen Tutor and not CES putting the show on, Hank Lundy manages to leave a huge impact on the Jan. 11 card without actually fighting. The main event features John Molina (who controversially beat Lundy by 11th-round stoppage on FNF) against Dannie Williams (who is a clown who got exposed by Lundy on FNF last year.)

Our friends at GYM Promotions make an appearance as well, putting David Lemieux’s status as king of the hobos on display on Feb. 8 at the Bell Centre in Montreal. Lemieux takes on some schmuck (Jose Miguel Torres, who already has five losses) who he will knock out in one or two rounds, setting the stage for Chris Eubank Jr. to get a very likely on-air swing bout against an opponent who at this writing has yet to be determined.

Your columnist’s bugbear Joe DeGuardia (who got publicly hot under the collar at me in the comments section of an article I wrote about Demetrius Andrade after the Rudy Cisneros fight) has Delvin Rodriguez, who hasn’t been in an interesting fight not involving Pawel Wolak in his career, fighting on Feb. 15 in Connecticut. Short of putting Rodriguez in with the ghost of Arturo Gatti, I’m not sure there’s a fighter out there who’s going to bring out Delvin’s best again. Rodriguez is what he is; a guy who out-boxes his opponents in ways that don’t catch the attention of judges, meaning it won’t be in any way surprising if he loses by decision to 31-0-1 George Tahdooanippah (which last name sounds like some kind of porn film involving someone with a Boston accent who likes to bite.)

Conspicuously absent is Ruslan Provodnikov; the Russian was supposed to fight on Jan. 25, but ESPN’s Dan Rafael reports that Provodnikov is off that card due to an unspecified injury, not the first time that the boxing gods politburo has sent him to Siberia. In his stead comes once-beaten Serhiy Dzinziruk, no longer a serious factor at middleweight, taking on Brian Vera, who isn’t nor has he been in his career a serious factor anywhere.

Speaking of ghosts, who wants to see Jose Luis Castillo taking on a guy who’s as far away from Diego Corrales as it’s possible to be? Can we interest you in Antwone Smith, the guy best known for grunting like Monica Seles as Kermit Cintron halfheartedly chucked leather at him a year and a half ago? No? Well, tough cookies. It’s the co-feature of another who-gives-a-crap bout on Feb. 1 involving Carlos Molina (the junior middleweight who got DQ’d against James Kirkland, not the guy Amir Khan smacked around last week) and the Weekend at Bernie’s version of Cory Spinks. Spinks didn’t get the message from Cornelius Bundrage that perhaps full-time consideration of another endeavor might be in order in June; nor did he get the good sense to hang ’em up when Bundrage did the same thing to him in 2010, nor, indeed, did he learn his lesson when Zab Judah kicked his ass in 2005. The last time Spinks was a world champion, he won the title from Deandre Latimore, which suggests that perhaps the IBF needs to think a lot more carefully about who it puts in the ring for vacant world titles; indeed, Spinks held that belt for as much time as it took Bundrage to feast upon him.

Finally, the only remaining announced fight night at press time is all the way out in March; Andrzej Fonfara, who beat Glen Johnson into retirement, is fighting…someone. All they’ve got is a name and a place (the UIC Pavilion in Chicago.) Unless Fonfara wants to gain the same reputation as a certain other fighter from the Eastern Bloc in beating up senior citizens (Denis Lebedev, looking squarely at you), he’d do well to fight a guy who’s at least younger than your columnist’s 35 years.

Everything listed above is…familiar. Whether it’s good remains to be seen. Let’s just say that with the exception of an entertaining-if-brief fight from Lemieux and the hope that John Molina, reducing his level of competition after an ill-fated title shot, can do to Dannie Williams what he did to Rob Frankel, there ain’t exactly a lot to go on here to suggest that FNF will feel anything but stale in 2013. Dear gods, I hope I’m wrong on that. My writer’s soul depends on it.

Fox Doucette covers Friday Night Fights for The Boxing Tribune. His weekly column, The Southpaw, appears on Thursdays. He wants to see blood and unconsciousness in equal and frequent measure and makes no apologies for that fact. Fan mail, hate mail, and fighters in need of a good hatchet job, especially if DeGuardia promotes them, can be sent to beatcap@gmail.com.