For some reason, ESPN in Mexico has decided to air Friday Night Fights on Saturday, so I had to wait a full twenty-four hours to see for myself whether Friday’s Arash Usmanee–Rances Barthelemy bout from the Magic City Casino in Miami, Florida was petty theft or grand larceny.

I scored the fight 115-113 for Usmanee– Hardly the worst decision I’ve seen and I was tempted to write it off as “just” a regular, run-of-the-mill rip-off. 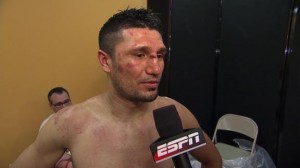 But what a jaded response to something that should provoke a lot more anger– “Just” a “regular” rip-off.

Boxing fans have become so accustomed to screw jobs of all shapes and sizes that there are now degrees of offense. It’s the equivalent of a battered wife dismissing a busted lip because she could’ve been thrown through the plate glass window.

Whenever someone clearly deserves a win and doesn’t get it, something bad has happened. All the hard work, all the dedication invested into a fighter’s performance is flushed down the toilet by an incorrect call. Sometimes fighters never get a chance to recover from the effects of a bad call, sometimes it takes years to work themselves back to the spot where they were before the screw job.

But, even if the poor call has no long-term adverse effect on the fighter’s career, it’s still heartbreaking to, as The Boxing Tribune’s Fox Doucette put it in his Friday Night Fights recap, win the fight, but lose the decision.

From a business perspective, this kind of stuff has been a constant thorn in boxing’s side. It has kept casual fans away and potential sponsors at bay. In any other sport, even if the game is dull, at least there’s some logic at the end of the event. The winner will actually win.

Boxing’s subjective scoring system will always leave certain fights up to debate and some old school-types will insist that putrid decisions have been and will forever be part of the game. But this isn’t 1957, where a shady call stays relegated to the headlines of a local newspaper and the outrage doesn’t spread beyond those actually in attendance.

Now, every bad call becomes a worldwide headline, instantly passed along from website to website and throughout social media. And every time this happens, no matter to what degree, boxing loses a little bit more of its soul.

Maybe, right now, the live gates are okay and the TV ratings are respectable, but all of the nonsense that goes on around the actual product is making it harder and harder to get boxing back to where it was before mainstream America lose interest.

No, bad decisions aren’t “killing” boxing, but they sure are making it look absolutely ridiculous. And they’re dishing out unhealthy doses of heartbreak to the fighters who take all the risks and pay all the prices.

Articles about bad calls and inept/corrupt judging are so cliche at this point, but boxing can’t be run like a hustler’s basement poker game anymore and the fans shouldn’t allow themselves to become so jaded as to categorize levels of outrage.

We all know what’s needed in the sport– An independent centralized authority to oversee the vulnerable spots where the slime tends to leak through. We also know that this one reform will likely never come to pass without some sort of federal edict.

Heartbroken fighters and the pillaging of a sport for short-term gain are obviously not enough to generate any movement.

So, enjoy the sport that fan ambivalence and media ignorance has created. No matter what superficial reforms are made or how many slaps on the wrists are issued, the money fighter will always get every benefit of every doubt and the game will be controlled by the buck, not by anything resembling logic.

The problem is not with the crooks. The problem is that far too few boxing people– from the fans to the writers to the fighters– care to do anything to fix it.

In the meantime, for those inclined to do so (courtesy of Johnny Walker of Boxing Insider), let the Executive Director of the Florida State Boxing Commission, Cynthia Hefren, know what you thought about Friday’s contest: cynthia.hefren@dbpr.state.fl.us.

You can email Paul at paulmagno@theboxingtribune.com or watch as those who used to religiously link to his work now pretend he doesn’t exist.  Paul is a full member of the Burger King Kids’ Club, a born iconoclast, and an ordained minister in the Universal Life Church.