Greetings and welcome to another bombastic action-packed edition of the Sunday Brunch. Today we will be blowing it all out of the water with dual flame-throwing precision and I will personally be handling the double-barreled super-soaker of truth and righteousness. Some of the topics for today include: The recently announced battle plans for Floyd Mayweather: who’s he fighting? How will they stand up? What’s he going to be wearing? Also, we take a peek at some 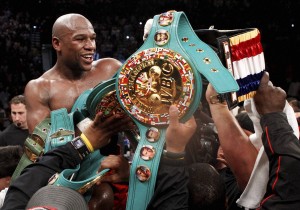 recent events in and around the sport. So with that, I gave you your instructions in the dressing room, remember to protect yourself at all times, what I say you must obey, cuidate, eschua me, toca los manos, buena suerte.

So, according to ESPN, Floyd “Money” Mayweather has two fights scheduled. One on May the 4th, and one tentatively set for mid-September.

The two opponents that have supposedly been given the official nod are (interim) WBC welterweight titlist Robert “The Ghost” Guerrero and the Mexican WBC junior middleweight champ Saul “Canelo” Alvarez. Both have the capability to be entertaining scraps, though how well each would fare against the sports most competent counter-puncher remains to be seen.

On one hand you have The Ghost, riding high off a career-best win with his dismantling of former champion Andre Berto (though, Berto stifled his own chances in that match with a bizarre change-up of technique, instead of his usual “beast mode” all-out aggression style, the Winter Haven, Florida native opted instead to try his hand at the Philly shell defense Ala James Toney & Floyd Mayweather…Needless to say that was the wrong approach for him). Robert does have some interesting things going for him, though. He’s a southpaw with a good reach and he likes to mix things up on the inside; Fantasma occasionally fights dirty as well. In his battle with Berto, Robert regularly held and hit (behind the head no less) and smothered Andre’s work while landing his own sneaky left-handed shots.

Guerrero’s tenacity alone gives him more than a puncher’s chance against Floyd. Some would say that The Ghost has a legitimate chance in upsetting the odds when he squares off with Mayweather in May, I say that unless he can somehow render the pound-for-pound champion unconscious in under three rounds, his chances for victory go from slim to none. Floyd generally takes a couple of rounds to figure out his opponents and after that time he rarely loses another minute (if any at all) in a given fight.

Canelo is another interesting match-up for Floyd Junior. If nothing else, their styles will most certainly mesh well and create excitement and (as the recently retired HBO dinosaur Larry Merchant would often put it) drama. I can foresee a very aggressive, nothing-to-lose attitude and fight plan from the Mexican banger. He will come in looking to get Floyd outta there with hard body shots and a lot of pressure. Unfortunately for him, though, Mayweather thrives in those kind of situations and nine times out of ten when someone is rushing head-long into danger, they will find their way to the canvas when Floyd Mayweather is in the opposite corner. Not to say that Floyd is the biggest nor the most dangerous puncher in the sport, but when a forward charging foe heads to him like Canelo often does, he will be rife with counter-punching opportunities.

Did anybody catch the Stevie “2Pound” Forbes versus Johan Perez fight on Fox Sports the other night? The bout was live from the BB&T Center in Sunrise, Florida and was hosted by WBA welterweight champion, Paulie Malignaggi (in my opinion one of the very best broadcasters in the sport). The 35-year-old Forbes put on a good display of what once made him a champion, showing the younger (and much bigger) Perez what an experienced ‘contender’ could do if given the opportunity. Regrettably for the Portland, Oregon native, 2Pound would drop a split decision to the younger Venezuelan fighter, his fourth loss in a row (for the record, I thought he did much better than given credit for in his fight with Oscar De La Hoya).

After the decision, a lucky-to-have-won Perez passive-aggressively called out an interviewing Malignaggi (who brushed it off like a champ) as Paulie was handling the post-fight remarks. Malignaggi would go on to get the thoughts from the former undisputed world heavyweight champion, Evander “The Real Deal” Holyfield who was sitting ringside for the event. After the five-something minute interview one thing became glaringly clear…I could not for the life of me look away from Holyfield’s ear (yes, the Tyson ear). He could have been calling me out by name to fight on the undercard of the next Pacquiao card and I wouldn’t have noticed. I was mesmerized. One thing I did catch was The Real Deal saying he wants one more crack at a major world title, presumably with a Klitchko…Good luck, Champ.

Keep it tuned in here for more of the latest and greatest from in and around the sport with The Boxing Tribune. We’ll see you next week with another edition of your Sunday Brunch; stay hungry, my friends.