What a first couple of weeks of Friday Night Fights, huh? ESPN2’s weekly boxing extravaganza has given us two weeks of good, solid boxing action, and if one can look past the hideous judging, a Fight of the Year candidate for the year-end FNF awards come August in Usmanee-Barthelemy. Last week’s Molina-Williams tilt, while not exactly a very valid matchup in terms of being competitive, was nonetheless hellaciously entertaining in the sense of fans enjoying the beautifully brutal violence that underpins a good action fight. 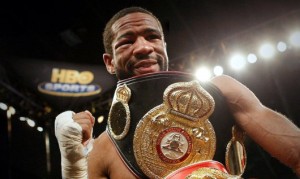 This time last year, your columnist was lamenting the atrocious beginning to the FNF season as hopefully not a sign of things to come (prophetic, since 2012 was a dud in every way imaginable on the Worldwide Leader.) This year? Well, if coincidences have deeper meaning, a great action fight followed by an absolute robbery of a decision is kind of a best-case scenario. On the season opener of the 2011 FNF season, Ruslan Provodnikov got hosed on the scorecards against Mauricio Herrera. The Year of the Upset was off and running, and great matchmaking led to a series of wonderful fight nights and the best fight to hit TV in years when Pawel Wolak and Delvin Rodriguez threw down.

Repeat after me: Styles. Make. Fights. Cliches have as their underpinning their essential validity, which is why they get parroted ad infinitum. A guy like Delvin Rodriguez is a boring fighter most of the time, his outside-boxing, countering style inimical to the notion of what makes a great TV fighter. You know what you’re getting from a Rodriguez fight, and you could be forgiven simply dismissing him as an entertainment choice.

Contrast Pawel Wolak, who comes from the Micky Ward/Arturo Gatti/Emanuel Augustus school of only knowing one direction in the ring (and that’s straight ahead) was the force meeting the object. Before the fight, those in the know were hitting the angle that in order for Wolak to win, he was going to have to press Rodriguez and not allow him to get into a rhythm and a comfort level on the outside. Forcing Delvin Rodriguez to engage would make Rodriguez fight Wolak’s fight—basically the reason that Wolak was the swollen eye of the gods from winning that fight when all was said and done.

The above, Teddy Atlas stuff is not why fans loved the fight, though. The action was why—and that was made possible by great matchmaking. Someone knew that the immovable object was going to bend at the onslaught of the irresistible force, and that made the fight compelling.

Lamont Peterson fights Kendall Holt on FNF in five weeks. A title (the IBF at junior welterweight) is on the line, providing championship cachet to the fight for the Worldwide Leader to use as a marketing chip. But merely having a belt at stake is not in itself sufficient to make a fight must-see TV; if it were, the wretched first five and a half rounds of the Guillermo Rigondeaux-Rico Ramos fight last year would’ve all been Round of the Century material.

Lamont Peterson is a TV-friendly fighter who frustrated his opponent in the biggest fight of his career and forced him into a Pier 6 brawl, Kendall Holt is a TV-friendly fighter who is capable of overpowering his opponent and turning a Pier 6 brawl into a devastating knockout (see his fight with Julio Diaz on FNF in 2011). Lamont Peterson and Kendall Holt will be in the same ring with one another in a bout that is probably best described as “an amount of rounds not to exceed twelve” rather than “a 12-round fight”. Any similarity between Peterson-Holt and a boxing match going the distance with a title on the line is purely coincidental.

And how glorious a coincidence it can be, should 12 rounds not decide a winner. The “how on planet Earth did nobody get knocked out?” factor of disbelief should be off the charts. Kendall Holt has a suspect chin and astounding power. Lamont Peterson has a suspect chin (down twice against Victor Ortiz and once against Amir Khan) and questionable-but-definitely there power (knockouts of Victor Cayo and Willy Blain speak to that.) You see where this is going.

All it took was a matchmaker willing to look at two guys who are going to step in the ring with each other and slug it out until either one of them is unable to remain upright or else 12 rounds have elapsed, the Scorecard Oracle consulted, and a winner declared for a fight that without doubt will be the Fight of the Year if it goes the distance. “If it goes the distance” pretty much always ends well if not spectacularly, no?

The powers that be at ESPN forgot this principle last year. They seem, at least so far in 2013, to have remembered it. So help us all, your columnist will enjoy his job more. Keep on keepin’ on, and may Peterson-Holt become at least the third-greatest junior welterweight fight (Ward-Gatti I and Arguello-Pryor) of all time. Kudos to the matchmakers remembering how to do their jobs.

Fox Doucette covers Friday Night Fights for The Boxing Tribune. His weekly column, The Southpaw, appears on Thursdays unless there’s a power outage in the middle of fucking nowhere, in which case it runs on Friday with apologies. Fan mail, hate mail, and “which was better, Ward-Gatti or Arguello-Pryor” can be sent to beatcap@gmail.com.