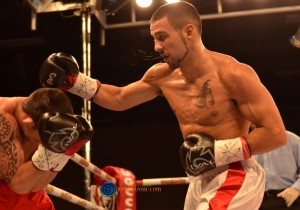 Friday night the light welterweight prospect gets the opportunity to advance that dream when he meets Jose Hernandez (13-6-1, 5 KO) on ESPN’s Friday Night Fights.  Those in and around Luis’s home area of Cornwall, Ontario have known Luis had talent since his amateur days, but the young fighter has long had bigger desires, which include being featured to a large American audience in hopes of gaining a title one day.

Luis, like many young prospects, prepared for this moment at an early age.  He began boxing young and committed to the sport at age eleven. He had an excellent amateur career, including being a six time provincial champion and competing in international events.  After just missing being on the Canadian Olympic team for Beijing, he turned pro to begin his real goal of being a top pro fighter. Luis says he sees himself as being more suited for the pro version of the sport considering his desire to go to the body and fight on the inside which works in the pros but goes unnoticed in the amateur world.

He started with five wins all by decision, but has since settled into the pros and physically matured.  In his last ten bouts he has seven knockouts including a first round knockout of Alejandro Barrera 21-9 (7 KO) to win the vacant WBC Continental Americas title.

Tony is trained by his father, who has been running a boxing gym for years.  He admits they have their battles, but says they have a great working relationship in the ring and gym.  He has talked in the past of wanting to have a moment similar to what Danny Garcia had last year when he broke down emotionally, winning his first title with his father in his corner.

Luis takes a big step Friday toward his goal, making his American TV debut.  The Boxing Tribune caught up with Tony again to talk about the opportunity he has this week.

“It’s my American television debut.  I gotta look good and make an impression.  I want to move forward with my career.”

Tony believes his time has come for this moment.  He also made it clear he has had enough of camp and simply wants to get in ring to do his thing.

“I’m not surprised.  I feel like it’s time to be here.  I feel like it is long overdue and I’m glad to be given the chance to take that next step up and make progress with my career full time.  I’m ready to go.  I’m sick of training and want to get in there and get it over with.”

Luis recently went through a process before his last fight of mulling offers from several promoters, including Golden Boy, and chose Greg Cohen Promotions to move his career in the right direction.  A decision Tony is happy with considering the upcoming fight; “He got me on ESPN.  I have no regrets signing with him at all.  Obviously he’s given me a chance and I need to perform and look good so he can keep getting me these opportunities.”

When he steps in the ring Friday he will find late replacement Jose Hernandez.  Luis was scheduled to face the more highly regarded Miguel Gonzalez (20-3, 15 KO) but Gonzalez dropped out.  On paper, Hernandez seems an easier opponent, although at the least he is durable with only one stoppage loss coming to Sharif Bogere.  A late opponent switch when you have prepared for one guy can throw a fighter off.  Tony believes his amateur background provides the needed lessons to overcome any changes.

“I’m used to it from the amateurs.  In the amateurs, in tournaments you fight guys you never heard of and develop a game plan while you’re in there.  You know what I mean with opponent switches on the spot, that’s where the amateur experience comes in.”

Then you have to factor in the chance of a letdown, taking on what appears to be a lesser opponent.  The Cornwall product doesn’t appear to be suffering any letdown and is focused on his new opponent.

“I was glad I was able to find some footage of him and he’s got a pretty straight forward style. That doesn’t mean it’s an easier fight, though.  I actually think psychologically it would have been a tougher fight (noting Gonzalez is more awkward) on a skill level, but compared to intensity and stamina this guy’s going to present a much different test than Gonzalez just because of his style.  He’s much more aggressive, he’s stronger, he’s tougher, and he knows how to fight too.  He’s got quick hands and I don’t think he’s going to be less of a fight than Gonzalez at all.  I think it’s just two different styles.”

What’s enjoyable about Tony is his intelligence and his honesty.  He is a smart guy who speaks well and tells it to you straight.  When asked if he is worried about performing on TV at first he tried the standard line, but then his honesty backtracks, admitting you think about the cameras and lights but have to focus on the job at hand.

“No, I’m not even thinking about it.  I am and I’m not.  I can’t say I’m not thinking about it but once I get in there I’m going to block out the cameras, I’m going to forget that ESPN’s there, whoever is in the crowd watching, it’s just it’s just me and him in there and another day at the office.  If I get caught up in the hype and everything surrounding the event, that’s how fighters can lose.”

Tony spoke to the belief that he is of an age and maturity that he is ready for this time and this point in his career to block out the distractions and focus on his plan in the ring.

“That’s how I know I’m ready to be at this level because a couple of years ago I probably would have got caught up in all the hoopla and everything surrounding it.  Now I’m more focused.  I’m settled into what I have to keep my eyes on and that’s that.”

However when it comes to fighting on TV, winning is often not enough.  If you want to be a star, if you want to win the crowd, you have to do more than win.  You have to be exciting.  You have to fight in a manner that boxing fans say that is a guy I will watch.  So is Tony going to have that in his mind Friday night?

“Yes and no, that’s a good question.  I got to block out the cameras and the crowd and stick to the game plan and focus.  Sometimes fighting for the crowd can get you in trouble because the crowd just wants to see blood, they don’t care where it’s coming from.  They are not thinking about strategy, you know what I mean.  They just want to see action.  I, how can I put that?  I want to look good.  I know I got to look good on TV; I want to make an impression.  I don’t want to do just enough to say I won and walk away being content with satisfactory subpar performance.  At the same time I’m not going to go out of my way and try to get reckless or over aggressive because I want to look good.  Stick to the game plan and the basics of what got you there and I don’t want to get away from that.  Just sticking to the basics of the game plan is going to be impressive enough.”

So what exactly does he have to do to come out on top and come out with fans wanting to see more?

“Just be myself.  There is nothing I have to change from any other fight I’ve fought.  There’s always little small habits you have to correct you’re not always going to get away with against everyone.  Use my speed and punching combinations and boxing smart.  That’s all it’s going to take.  If he wants to bang and brawl we can do that.  If he wants to box we can do that.  It doesn’t matter if it goes five rounds or ten rounds either way I’m ready.”

Assuming Luis comes out on top Friday night he is faced with the problem many of today’s prospects have after hitting TV.  You get bigger paydays and bigger exposure on TV which is addicting.  It is hard to go backwards and fight off TV in smaller arenas, but the fact remains boxing only has so many TV dates.  Waiting for TV often means being inactive which can spell disaster for a fighter still growing, learning, and maturing in the sport.

“I definitely don’t want to fight less because I haven’t been as active as I would have liked to have been the last couple of years anyway.  If anything I do want to fight more. I think there’s some lost time I need to catch up on.  The plan with Greg is keeping me active.”

Fighting more often whether it is on TV or not also means at least some money is coming in even if it is not the TV paycheck.  Luis, who currently works with clients in the drug and alcohol field, knows he is not at the point where he can sit around and wait for TV fights.  He loves his work helping those in need but also dreams of a day when boxing is his sole focus.  That won’t happen waiting around for TV dates and it won’t bring in the money needed to focus only on boxing.

“I don’t think I’m at a stage where like a Floyd Mayweather guy where he can afford to fight once or twice a year.  I do want to fight more and to keep my name out there because I’m just now starting to get noticed slowly.  Outside of Canada there is still a good number of people in the states and elsewhere that haven’t heard of me yet.  So this is just the beginning so I definitely don’t want to be inactive because people can forget easily.  So if that means I have to fight some off TV dates in between to stay active I’ll do it.”

In the end getting to his goals, being a world champ, being a household name, and all the things that come with those goals Luis has to perform and perform well Friday night.  Boxing is a cruel sport these days.  One loss or even one win that was a so so event can put a fighter in the back of the line.  When given the opportunity to perform on a stage such as Friday Night Fights a boxer has to make it happen.  They have to win and look good doing it if they want to go to the next level.  They have to do what Tony Luis says he will do Friday night for the fans.

For more on Tony Luis’ past, his career, and life outside the ring check out the Boxing Tribune’s past two interviews:

Tony Luis and a Fighter’s Move from Prospect to Contender