It’s a new year, and more than likely, a new you. No doubt you’ve been working off the holiday pounds in the gym, and the fresh smell of the new Nike Dri-Fit apparel you bought on clearance on December 26 has faded away, giving way to the light, pungent aroma of sweat and stale Axe body spray. I know we’re a month into the new year and you’ve no doubt been missing your weekly dose of Broken News, but the 2013 debut of Broken News comes better late than never.

Another somewhat high profile fight falls under the “File for Later” category with the announcement that Devon Alexander’s injured bicep will postpone his February 23 IBF welterweight title defense against Kell Brook. Alexander-Brook was to be televised by Showtime and would have taken place in Detroit, Michigan, and is the second big title fight to be postponed due to injury so far this year, following in the recently-postponed Danny Garcia-Zab Judah junior welterweight title fight.

And in the most disappointing twist to emerge from Alexander’s mysterious bicep injury, Alexander may be the lead candidate to face Floyd Mayweather in his May 4 return to the ring. “The negotiations for my fight are almost done. The front runner is IBF Champion Devon Alexander. It’d be a unification bout at welterweight,” Mayweather (or whomever actually runs his Facebook and Twitter accounts) posted to his Facebook fan page.

With attractive options such as Robert Guerrero and Saul Alvarez already bandied about as potential opponents, Devon Alexander, a man almost never in an exciting fight, would be a big step down in quality and box office appeal for Mayweather. 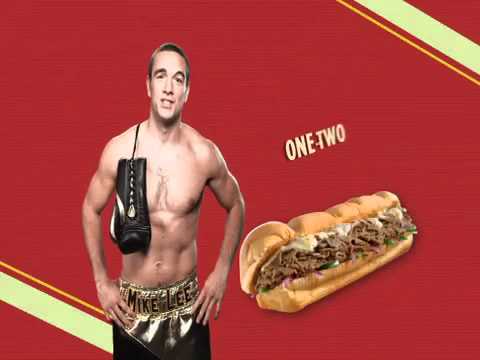 You’ve no doubt heard of the term “Great White Hope”, and possibly even “Great White Hype”. Subway’s 30-second Superbowl Sunday television spot featured boxing’s next “Great White Hope”, although most might call him a “Great White Hype”. Light heavyweight prospect Mike Lee (11-0, 6 KOs) is a long way away from a world title shot, but that didn’t stop him from sharing screen time with Michael Strahan, Ryan Howard, Robert Griffin III, Laila Ali, Ndamukong Suh, and other top-level professional athletes in the 15-year anniversary of Jared, the fat guy who lost a lot of weight by eating two Subway sandwiches per day.

Lee, who boxed while enrolled at Notre Dame, was plucked straight out of college and signed to a promotional deal with Bob Arum and Top Rank Promotions. As Boxing Tribune Editor-In-Chief Paul Magno stated in his Monday Rant focusing on Timothy Bradley, “Arum has all but abandoned U.S. fighters in favor of ethnic niche marketing.”

The Mike Lee experiment is another attempt at ethnic niche marketing by the master himself. Arum, the man who saw the potential to turn Manny Pacquiao into a global brand, sees the gold in Lee’s public appeal. Notre Dame, despite its role in the recent Manti Te’o scandal, its cover up of the accidental death of an audio visual student at a practice, and the suicide of a female victim who made allegations of sexual assault against players from its football team, is one of the most prestigious universities in the country. Boxing is a sport long dominated at the lower weights by Latino fighters, and as of late, its heavyweight division, once marked by American dominance, has been ruled by the Klitschko brothers of Ukraine. Boxing fans in America are starved for a White hero and are quick to jump at the next great hope, and more often than not, the latest not-so-great hype.

As it stands, it is too early to tell if Lee will ever pan out and reach the status of a Kelly Pavlik, but as his place in Subway’s Superbowl ad shows, he’s already being pushed as a big-ticket item in the sport.

The need to be the one to break the story of the death of a boxing legend once again reared its ugly head over the weekend when The Sun of the UK reported the impending death of Muhammad Ali. The Sun’s sole source, Ali’s brother Rahman Ali, was quoted as saying “My brother can’t speak, he doesn’t recognize me. He’s in a bad way. He’s very sick.

It could be months, it could be days. I don’t know if he’ll last the summer. He’s in God’s hands. We hope he gently passes away.” And with those words, the internet was abuzz with fans lamenting the coming passing of The Greatest.

The sorrow soirée was short-lived, however, as Laila Ali posted pictures of her father in seemingly good health, decked out in his Ray Lewis t-shirt and seated comfortably in front of the TV. The media made a circus of the death of Emanuel Steward, declared dead and resurrected Hector Camacho several times before his death was official, and it struck again in the rush to be the one to spill the first ink on Muhammad Ali’s grave.

Victor Ortiz’s Lube All Over Your Face

The best moment of the week so far has been this gem of a video, the promo video for what appears to be Victor Ortiz’s foray into the field of skin care and anti-aging products. It is 2013, after all, and if you aren’t taking care of your skin you’ll likely end up looking like an old catcher’s mitt by the time you’re 50. And if you’re worried about your masculinity being attacked, worry not; “VO by Facelube” is “ultra masculine”.

For the video that follows, we say, “Thank you for the laughs, Vic.”