Floyd Mayweather Jr., the highest paid athlete in professional sports for the 2012 reporting year, according to Forbes magazine, has signed a 6-fight pay-per-view deal with Showtime Networks Inc. and its parent company, CBS Corporation, leaving behind HBO Sports, his home for the last decade. The deal allows for Mayweather to fight 6 times over a period of 30 months. Mayweather’s deal, the details of which remain confidential, has the potential to be the richest deal in history if it reaches its completion and PPV numbers remain steady. 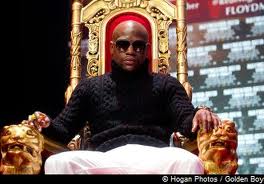 The press release received also names WBC “Interim” welterweight champion Robert “The Ghost” Guerrero as Mayweather’s May 4, 2013 opponent. Guerrero has campaigned tirelessly for the opportunity to fight Mayweather. After moving up in weight and beating Selcuk Aydin and Andre Berto, Guerrero looks to be getting the richest payday of his career.

Mayweather, who took a unanimous decision victory over Miguel Cotto on May 5, 2012, turns 36 next Sunday. He has been inactive following a brief stint in jail on domestic abuse charges, and will be making his first appearance in 364 days. He currently holds the WBC welterweight title and the WBA junior middleweight titles.