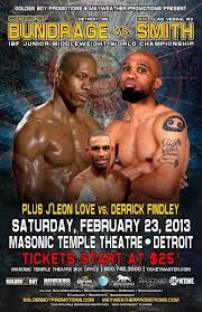 Originally slated as the co-feature to Devon Alexander’s IBF welterweight title defense against Kell Brook, Bundrage-Smith was promoted to the main event when a bicep injury forced the postponement of Alexander-Brook. With a Detroit native defending his world title as the co-feature, Showtime opted not to scrap the whole event and move forward as planned. J’Leon Love, a native of nearby Dearborn Heights, Michigan moves into the co-feature slot against Derrick Findley.

Bundrage comes in on a string of once-a-year title defenses dating back to his title-winning technical knockout effort against Cory Spinks in August of 2010. Bundrage went on to top Sechew Powell by way of unanimous decision the following June. And in his last defense, Bundrage stopped a rubbery-legged Cory Spinks to retain his title, in a rematch of their 2010 title fight.

Smith, on the other hand, has been active as of late. His career has been bogged down in lengthy periods of inactivity, promotional problems, and politics that have kept him from being more active. It is inactivity inside the ropes that has also hampered his fights. Smith will fight too defensively at times, and even when he is not getting hit a lot, he is hitting his opponent less than he’s being hit. This was the case in losses to Sechew Powell and Joel Julio earlier in his career. Lack of punching volume was also a problem in losses to Danny Jacobs and Fernando Guerrero, both close losses on the scorecards that could have swung the other way by a point of two. Prior to fighting twice in 2012, Smith had been out of action for 18 months. Wins over Ayi Bruce and Irving Garcia, along with the backing of Mayweather/Golden Boy Promotions, have put Smith in line for his first world title shot.

The main event is the type of fight that, on paper at least, looks to disappoint. Bundrage fights ugly. He is wild and sloppy and mugs his opponents on the inside. It’s not pretty to watch, but the tactics are effective for him. Smith is a defensive fighter schooled in the art of the shoulder roll defense. He often dispenses with a dedicated offensive assault for long periods of time, only focusing on blocking and making his opponent miss.

Bundrage’s best punch is an overhand right followed by a mugging in close distance. His footwork gets a bit sloppy and he’s sometimes left lunging in when he throws his right hand. Bundrage doesn’t do anything particularly well, but he’s very strong and has a way of imposing his will on his opponents.

Smith, up to this point in his career, has been a guy who can have an opponent’s will forced upon him. In the past he’s shown a proclivity for ditching his game plan early and settling in to a defensive shell. Smith isn’t a powerful puncher, but he’s very good with either hand. He has a solid left hook and keeps his right hand straight down the middle when he throws it. Smith struggles in opening up on offense, which is a habit he’ll have to break if he wants to overshadow Bundrage’s work rate and activity.

Bundrage is nearing 40 years of age, but he still fights with the energy of a man much younger. He’ll jump on Smith, looking to smother him and rough him up after throwing one big shot on the way in. Smith has to be able to claim the center of the ring and give Bundrage angles. Smith will have to throw more than he’s accustomed to, and look to catch Bundrage on the way in and slide out to his right before Bundrage sinks his claws into him.

As the old saying goes, “Old habits die hard”, and that spells bad news for Ishe Smith. Bundrage will outwork and overwhelm him, eventually forcing Smith into his defensive shell. The scorecards should swing in Bundrage’s favor to the tune of 116-112.

The co-feature shouldn’t be in doubt at all. J’Leon Love is a top-quality prospect, and Derrick Findley is a club fighter accustomed to taking fights on short notice and looking good in a losing effort. Look for Love to stop Findley sometime around the sixth round, when the referee mercifully stops the fight.