There’s going to be the temptation to say that British heavyweight, David Price (15-1, 13 KOs), was exposed in his TKO 2 loss to Tony Thompson on Saturday (another temptation would be to use a god-awful “The Price Was Not Right” pun in a fight recap).

But it’s hard to refer to someone so relatively untested as “exposed.” 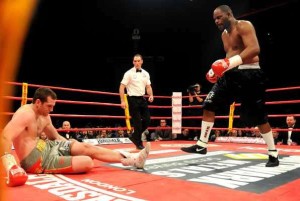 Price is the exact same fighter he was prior to entering the ring at the Echo Arena in his hometown of Liverpool.

Big and strong, but stiff and mechanical, the questions about Price were always concerning how well he could take a punch from a heavy-hitter. The 29-year-old super heavyweight Olympic bronze medalist had yet to meet someone who could stand up to his heavy hands and/or figure out a way to avoid them. In 41-year-old American veteran, Tony Thompson (37-3, 25 KOs), he was set to get his first real, international test.

Thompson’s two crushing defeats to Wladimir Klitschko had obscured the fact that the 6′ 5″ southpaw was, actually, not a bad fighter at all. With a load of wins over solid second and third-tier opposition, the well-seasoned Thompson could not only punch a little, but he’d be throwing those punches from the lefty stance.

Coming into the fight, the key would be whether Thompson saw this as a winnable fight or merely a final cash-out before heading off into retirement.

Slick and relaxed in the face of Price’s mechanical forward march, Thompson was able to take the first round and then survive a brief offensive surge in the second before closing the show with a glancing right hook off Price’s temple.

Nine of ten heavyweights may have gone down like Price, but the Liverpudlian will now have to do some serious damage control before even addressing the technical flaws in his game. Much like Seth Mitchell in his TKO 2 loss to Johnathon Banks, Price’s loss takes on an exaggerated importance due to his status as one of the heavyweight division’s “next big things.”

In the defeat, Price loses some of the intimidation factor that has gone into building his image. Whereas prior opponents may have entered the ring half-defeated already, future opposition may be a bit braver, a bit more willing to continue the battle in hopes of landing that one big, fight-ending shot.

Price will have to be better from this point forward. This is a good thing for a fighter’s progress. If there is a real steak behind the sizzle of David Price, we should see it now.

For Thompson, this means one more round of paydays. Realistically, a title run at a legitimate heavyweight strap is not an option, but there are plenty of UK grudge matches to be had in packed arenas against British fighters looking for the same type of win Price’s people had desired. Now, though, a win over Thompson also bags the victor an indirect win over Price. Tyson Fury and Audley Harrison, who won the UK Prizefighter Tournament over the weekend, are early candidates for Thompson’s extended UK tour.

Later that day, a different type of heavyweight buzz was being generated from the Paramount Theatre in Huntington, New York as Malik Scott (35-0-1, 12 KOs) learned the hard way that a big man needs a big punch for high-end heavyweight existence.

Fighting to a controversial ten round draw against fellow undefeated rising fringe contender, Vyacheslav Glazkov (14-0-1, 10 KOs), Scott, along with just about everyone watching the bout, felt that he had gotten the pointy end of the screw job.

“This is a Main Events show, his promoter is Main Events,” Scott would say after the bout. “This was his stage.”

Scott controlled the pace of the bout, doing pretty much as he pleased and winning at least seven of ten rounds on The Boxing Tribune scorecard. However, being the better man isn’t always good enough. As is often the case among boxing’s big boys, better is good, but badder is much better. Quiet competence will never get a fighter the benefit of the doubt– especially in enemy territory against a come-forward guy in the heavyweight division.

Malik Scott has always had this barrier standing between him and next-level success.

The Philly fighter is 6′ 4″, moves beautifully, and executes flawlessly. He looks the part of a world champ and even has main stage charisma to help sell his brand. But Scott can’t punch. And without a punch, he will always be spinning his wheels professionally, a second tier contender caught in the purgatory between being unable to get a meaningful fight and an inability to win the big ones that do come along.

American fight fans, especially those who closely follow the heavyweight division, insist on a certain level of entertainment. And that entertainment really just boils down to bludgeoning power and bloody destruction. The officials judge accordingly.

At 32, there’s still time for Scott to add some pop to his game, but a significant change in temperament isn’t likely. Unless something drastic happens, expect a perpetually frustrated Scott to keep dwelling on the fringes of main stage contention.

The Ukraine’s Glazkov is an okay fringe contender with a nice amateur resume, but hasn’t shown much to suggest a rise to the division’s highest levels. A move to New Jersey and the addition of veteran trainer Don Turner should help his development, but it’s still the outside-the-ring stuff that makes him a better long-term prospect than Malik Scott.

Glazkov, as a Main Events house fighter, will be based in a Jersey area full of Ukraine nationals and Soviet Bloc immigrants, so there will be a ready-made fan base in place to help push him along. Add a crowd-pleasing, come-forward style to his plus side and fans might be seeing the early development of a slightly bigger Ukraine version of Tomasz Adamek.

Still, last Saturday night, Malik Scott deserved more than a draw. He was the better fighter and fought the better fight. But, way too often in boxing, it’s not all about the actual fight.