Contrary to earlier reports, Saul “Canelo” Alvarez has elected to remove himself from the undercard of Floyd Mayweather’s May 4 WBC welterweight title defense against Robert Guerrero, set to take place at the MGM Grand Casino in Las Vegas, Nevada and broadcast live on Showtime Pay-Per-View. Alvarez has elected instead to unify his WBC junior middleweight title against WBA junior middleweight titlist Austin “No Doubt” Trout on Showtime Championship Boxing. Golden Boy CEO Richard Schaefer has confirmed the fight is a done deal and will likely take place at the Alamodome in San Antonio, Texas on April 20. 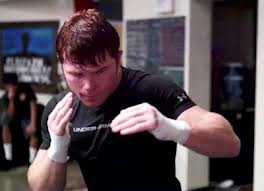 Whether or not moving Alvarez off of Mayweather’s Cinco De Mayo Weekend undercard will hurt his numbers remains to be seen. Alvarez is a star with a very large following of his own, and his presence on a pay-per-view card helps bring viewers. But with only two weeks in between April 20 and May 4, Showtime Championship Boxing will likely dedicate a lot of air time to promoting May 4.

The normally active Alvarez has been out of action since a 5-round drubbing of Josesito Lopez on September 15. His interest in a potential clash with Miguel Cotto was dashed when Cotto was defeated by Austin Trout last December.