Finally. The International Boxing Association, the governing body in international amateur boxing competition, announced that it will discontinue the computerized punch tally scoring system and return to the professional style, 10 point based system it abandoned over 20 years ago.

The implementation of the computerized scoring system took place following the 1988 Olympic games in Seoul, South Korea, and one of the biggest travesties in Olympic boxing history. Light middleweight Roy Jones Jr. met Korean Park Si-Hun in the gold medal match. Jones handled Si-Hun easily: out punching, out landing, and outfighting him to the point that scoring was just a formality, or so everyone thought. The scores were tallied and to everyone’s astonishment (and disgust), Park Si-Hun was announced the winner and awarded the gold medal. Three of the five judges in that bout were banned for life, and the AIBA implemented their new and “improved” computerized scoring system, which debuted at the 1989 world championships. 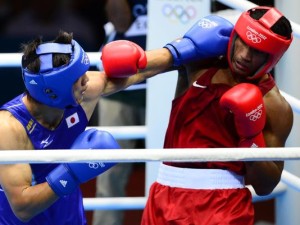 Under the computerized system, bouts are scored by five judges. Each judge has a keypad with a red and blue button, representing each fighter. Every time a boxer lands a scoring blow, the judges would press the appropriate button for that fighter. To get credit for the landing punch, three of the five judges have to press the button within a one second time frame. The fighter with higher tally of punches at the completion of the bout is declared the winner.

Seems simple enough right? At least to the arm-chair fight fan it may make perfect sense that the guy who lands more punches wins the fight, but it’s not that simple and here’s where it all goes wrong: the computerized system basically stripped away everything that made boxing what it was and turned it into a game of tag. Ring generalship, effective aggression, defense, all went by the wayside in favor of simple contact. Body shots and combinations were rarely given proper credit in scoring, standing eight counts and knockdowns earned a fighter no extra credit, and if a boxer knew he was ahead going into the last round, he could back peddle the rest of the fight without worry of losing the round so long as he kept his opponent from landing anything clean. What started out as intent to clean up biased scoring simply turned the sport into something unrecognizable and something few fight fans wanted to watch, and there was still plenty of wiggle room for judges to work the system.

The 10 point scoring system will work just as it does in the pro ranks: 10 points awarded to the winner of the round, nine or less to the loser depending on penalties, knockdowns, or extremely one sided rounds. Where it differs from the pros is that five judges will score the fight, as opposed to three used in professional fights. AIBA is looking to have the amateur ranks more closely resemble the professional game, and returning to the “old” scoring method is a good start.

Reverting back to the original scoring system opens the question: who, if anyone, can benefit from it? The United States has seen its performance in international boxing steadily decline since the computerized system was introduced, and that’s most evident when looking at the Olympic games. In the 2012 London games, the American men failed to medal for the first time in Olympic history. Despite the changes in our Olympic program, success has been hard to come by, and a large reason is because here in the States we still train our boxers the art of boxing. We’ve never adopted the tag system, which has put us at a disadvantage when reaching the higher levels of world competition, being matched against boxers who have been competing with that system all along. Now, with the slap and run method falling by the way-side, we may very well see American boxers work their way back to the upper levels of world competition.