Mike Alvarado (33-1, 23 KOs) put on a masterful performance of sorts, sticking to his much-publicized plan to box, rather than stand and trade with Brandon Rios (31-1-1, 23 KOs). At the end of twelve hard-fought rounds Mike Alvarado had his hand raised in victory in a fight that mostly lived up to the lofty expectations set by their October 2012 fight. 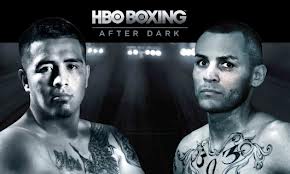 As was expected, Alvarado started out doing his best to box as Rios walked in behind a high guard to get inside. To his credit, Alvarado held his own when Rios did get inside, which was a change from their first fight. Rios banged away at Alvarado’s body and ripped him with right uppercuts when Alvarado leaned in. A Brandon Rios left hand opened a cut on the right eyelid of Alvarado near the end of the round.

The next few rounds were back and forth swings of momentum, started off with Alvarado nearly going down from a hard Rios jab in the second round. Rios poured on the pressure, hurting Rios with right hands and left hooks. Alvarado came back in the third when he found a home for his right hand. It was the right hand of Mike Alvarado that hurt Brandon Rios in the third round, swinging the pendulum back to his side momentarily. Alvarado continued to hold his ground on the inside, where he found his undoing in their first fight. Alvarado’s liberal use of the overhand right seemed to take away a lot of Rios’ left hooks to the body, and he was able to mix in uppercuts of his own while in close. A low blow from Rios stopped the fight for a few seconds when Alvarado needed some time to recover. Rios was warned for low blows, but there weren’t any other warnings for borderline shots.

The pace of the fight slowed in the sixth round when Alvarado decided to move and rely heavily on his jab, forcing Rios to give chase and work to cut off the ring and trap him. Alvarado didn’t throw his right hand enough, which allowed Rios to get inside and land his left hook to the body followed up with uppercuts.

Alvarado turned on the charm, so to speak, in the seventh, when he made a dedicated effort to stick and move, with Rios now unable to corner him. Rios’ jab, which nearly floored Alvarado in the second round, was missing throughout the final few rounds. Rios’ jab reappeared in the eleventh round, but it was too little too late. Mike Alvarado was able to get back into his track shoes and keep away from Rios, stopping only to rip him with three and four-punch combinations.

In a put-up-or-shut-up fight on the televised co-feature, Breidis Prescott (26-5, 20 KOs) was outboxed by young prospect Terence Crawford (20-0, 15 KOs) in a ten-round non-title bout.

The early rounds were close, with both men throwing around 30 punches each round. Crawford looked wary of Prescott’s powerful right hand and left hook. Crawford used lateral movement to keep Prescott in the center of the ring and to keep him from setting his feet and unloading.

Crawford would turn to the southpaw stance midway through the third round and found a lot of success in moving to his right, away from Prescott’s right hand. Working off of the right jab, Crawford mixed in straight lefts to the head and body and the occasional right hook as he moved side to side around a clumsy Prescott.

In the fifth round a cut was opened over the left eye of Prescott when he collided with Crawford in a close-range exchange. A visibly upset Prescott yelled at Crawford, who grabbed his crotch and yelled back. The next round opened with Crawford answering Prescott’s aggression with equal parts aggression and ring smarts. He ate a few of Prescott’s right hands in the middle of exchanges, but he took them well and always answered back.

Crawford had opened a wide lead on the cards by the tenth round, switching back and forth between the conventional and southpaw stances at will. Crawford decided to step on the gas and push for a stoppage in the tenth round, but ultimately wound up cruising across the finish line when Prescott would not go away.