At Liverpool’s Echo Arena Tony Bellew appeared to have confirmed his world title ambitions when he handily outpointed South African Isaac Chilemba over twelve difficult rounds – that was until the scorecards were read out and a quite ridiculous draw was announced.  Light-heavyweight Bellew failed to pocket the WBC’s ludicrous silver title as a result – which means, in real money, that he failed to win a final eliminator for the belt proper. 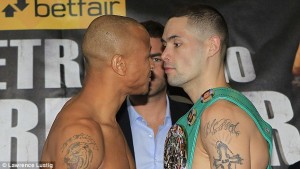 Bellew, 19-1-1, 12 KO’s, looked the bigger man at the weigh-in, and carried into the fight his trademark intensity. Throughout the build up Chilemba had refused to engage with Bellew’s manic stares and psychological games, and that carried through to the referee’s instructions, when the South African again refused to meet Bellew’s gaze. To his credit Chilemba, 20-1-1, 9 KO’s, didn’t appear phased by fighting on Bellew’s home turf and in front of a raucous, partisan crowd, even if he began the fight poorly.

Afterwards Bellew was distraught, feeling he’d won, and won well. In truth it was difficult to see how Chilemba could have earned a share of the contest, given that he didn’t start competing until the seventh round. Until that round, the South African had shown a decent set of defensive skills, an ability to keep his chin out of harm’s way, but precious little in the way of an offense – so little in fact that it took a hefty kick up his backside by cornerman Buddy McGirt at the end of the sixth for Chilemba to finally get on the front foot.

From the seventh to the twelfth round the fight became a seesaw affair in which both fighters shared the spoils across a few sporadic exchanges. Bellew appeared to coast through the eleventh round, clearly believing he’d got the fight won, and the Liverpool crowd must have felt that the verdict was going to go their way at the final bell.

When the three scores were read out as 116-112 Chilemba, 116-115 Bellew, and a draw at 114-114, the arena emptied in stunned silence. The crucial judge was  Christophe Fernandez, who saw the fight Chilemba’s way by four rounds, a decision which should attract censure from his employers.

Interviewed afterwards, Bellew claimed that McGirt had crossed the ring after the final bell and whispered in his ear that he felt his own fighter had lost, and he couldn’t understand the judging: “In my heart of hearts I know I won that fight. You have to ask what on earth the judge that gave it to him by four rounds was watching”.

Meanwhile, promoter Eddie Hearn confirmed that he’d be talking to the WBC about the final eliminator, which in all probability will have to be reprised