Over the last few years, I’ve become well aware of the fact that I walked into the boxing writing biz for very different reasons than most of the rest of this motley media crew.

Like all of those who decide to put pen to paper and talk boxing, I’m a fan. Unlike most of the others, I get no particular ego rush from hobnobbing with other wannabe big shots and couldn’t care less about being a semi-quasi niche celebrity or eventually launching myself into “bigger and better” things. 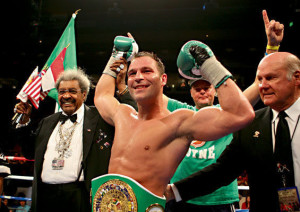 My only reason for ever entering into this silly underworld of little giants was to push for reform in the sport and to champion the cause of fighters who find themselves under the boot heel of the disgustingly corrupt boxing business model.

I assumed that I’d find some allies in my mission, but boy was I wrong.

From the very beginning, all I found was resistance, anger, and hypocrisy. Even the high-minded bloggers who give lip service to reform are, really, at heart, champions of the status quo with more of a desire to impress fellow bloggers than actually do something.

The media is the only line of resistance between boxing’s power brokers and the fighters and fans. If the media won’t step up, then there will simply not be any reform. Why should there be? What do the money men in the sport have to gain by changing the system that is, right now, totally set up to benefit their own bottom line?

It has become painfully obvious that if anything, ever, is going to be done, the push will have to come from the fighters, themselves.

Last November, light heavyweight contender, Ryan Coyne lost out on a shot at Nathan Cleverly’s WBO world title because of a spiteful Don King, who claimed promotional rights to Coyne while simultaneously refusing to actually put him in the ring.

With the clock ticking on his athletic prime and fully aware that he was financially overmatched in any legal battle with King, Coyne decided to take his case to the public. He contacted me to see if I would be interested in telling his story. I’m not naive enough to think that I was the first person Coyne turned to, but I was the only one to actually do something.

“I contacted a lot of people Paul,” Coyne recently told me. “When I got served a rotten egg, I wasn’t the sort of wimpy pecker to choke it down. Unfortunately, while I got a lot of ‘man I really support you or feel for what you’re going through’ behind the scenes, people weren’t so receptive when it came time to put the cards on the table in public.”

I wrote of Coyne’s case on this site as well as Yahoo.com, where I’m currently a featured writer for the Yahoo Contributor Network. The response was outstanding, but Coyne didn’t stop there.

The fighter would send off my Yahoo article to Village Media Group, owners of The Village Voice and several other publications. From there, the story got handed off to the group’s St. Louis publication, The Riverfront Times, where reporter Jessica Lussenhop did the job of a true journalist and produced a quality, in-depth article on the situation.

Lussenhop’s piece was precisely the type of long form exposé boxing needs, but which its media can’t (or won’t) do. Those in the boxing media with the money to pay for true investigative pieces are in bed with the sport’s power brokers, who essentially subsidize their operations. The smaller sites and/or independent writers lack the time and money to cover the cost of these long form endeavors.

Ideally, given The Boxing Tribune’s continued growth, this is what we’d like to be doing. For now, though, we’ll keep taking baby steps forward until the will of the fans allows for this change to happen.

In any case, it’s obvious that the mainstream, non-boxing press– even when handled by a boxing novice– does a much better job of reporting on boxing than the sport’s own media. There are many reasons for that, but that’s a topic for another Rant.

If Coyne had relied on the mainstream boxing media to spotlight these injustices, he’d still be right where he was when this whole thing started. The story just wasn’t “sexy” enough for main page coverage. Ryan Coyne wasn’t a big enough name and the story of an evil Don King just wasn’t titillating enough anymore to impress the wannabe big shots, who’d much rather be networking with other scribes at media days or posting quick-hit blurbs about traffic-drawing nonsense.

But “The Irish Outlaw” took his case to those who cared enough to share the word and, believe it or not, he found that there was, indeed, an audience for his story. The buzz from the article apparently even penetrated the thick walls of DKP headquarters.

While Lussenhop’s article was still being put together, Coyne received word from King’s people that they’d like to put him on one of their cards. A contract offering a “fair purse” and TV exposure was sent and the angry, spiteful Don King Promotions group, as Lussenhop would write, had a drastic change of attitude:

“Coyne, understandably suspicious, pored over the contract with his attorney Pat English, and together they extracted any language that insinuated the promotional contract between Coyne and DKP still exists. Coyne says they sent the heavily edited contract back to Florida mandating “all rights reserved” pending the litigation, expecting never to hear back. But DKP signed without amending it further.”

(Coyne was initially signed to be on the Bernard Hopkins-Tavoris Cloud undercard, March 9, against Marcus Oliveira in a WBA light heavyweight title eliminator. However, a cut suffered in training by Coyne pushed the bout back to April 12.)

While this attitude adjustment could be a ploy to give the appearance of fulfilling contractual obligations prior to a pending lawsuit, it also could have something to do with the mainstream press sinking its teeth into the story.

Boxing’s sleaziest dealers have no fear of the boxing media (and we know why), but they’re terrified to come face to face with real journalists with big budgets who can’t be placated with laminated press passes, a free media buffet, and hard-peddled “access” to the fighters. When the mainstream media cares enough about boxing to dig into a story, heads roll and the rat’s nest gets tossed about.

This wasn’t a phony PEDs campaign, specifically aimed at nothing other than tossing sexy headlines out for public consumption. This wasn’t a bogus rankings committee set up so wannabe big shots can feed their egos from the comfort of their Twitter accounts. This was an actual change, albeit on a small scale.

Ryan Coyne is still likely facing a legal battle and the bad blood is nowhere near gone between both sides of this situation, but at least he’s back doing what he does best– Fighting.

“…there’s no love loss there, and this is new territory for both sides in this,” Coyne said regarding his conflict with King and the upcoming bout. “I would have no problem working with King if he would honor a fair agreement with me, but in this life that will never ever happen. I am a fair, reasonable, and down to earth fighter who understands the importance of treating other people like human beings….[For the time being, though] My fists are clinched and my doors are open for business.”

Ryan Coyne will take on Marcus Oliveira April 12 at the Treasure Island Casino in Las Vegas, Nevada. The bout will be a part of Showtime’s ShoBox series.

You can email Paul at paulmagno@theboxingtribune.com or watch him be cyber-stalked by a FULL member of the BWAA.  Paul is a full member of the Burger King Kids’ Club, a born iconoclast, and an ordained minister in the Universal Life Church.