Juan Francisco Estrada 23-2 (17koes) showed he has ’Fists of Gold’ of his own, by dethroning Brian ‘The Hawaiian Punch’ Viloria after a great fight on the Macau Card in China. Estrada won the WBO and WBA World Flyweight titles, with a brilliant display of box-fighting, that slowly wore down the Hawaiian and had the brave Viloria struggling to stay on his feet in the final round. The action started with the twenty-two year old Estrada throwing combinations and moving in and out of range, while the flatter footed Viloria sought to counter with his big punches. Both men exchanged good shots from early on and it became clear that while Viloria’s punches carried more weight, the challenger had the superior hand speed and work rate. Estrada also seemed to be a more mature fighter, than in his brave effort against Roman ’Chocolatito’ Gonzalez last year, showing good boxing skills, and a more measured tactical approach. 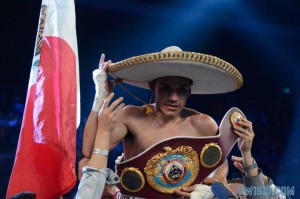 Viloria did manage to land some big punches in the early rounds, but as he showed against ’Chocolatito’ Estrada has an excellent chin. As the fight progressed, Viloria targeted the Mexicans body with some good shots, which seemed for a time to be slowing down the challenger, but Estrada regrouped and came back with a body attack of his own. By midway in the contest, the difference in work rate between the two started to have an effect, as Estrada increased the pace and Vilora began to struggle to keep up. With the fight moving into the later rounds, Estrada started to come forward more and the two exchanged some terrific body attacks, with a tiring Viloria being pushed onto the back foot. Both stood toe to toe in the last round, as Viloria made a desperate attempt to find a big shot to save his title. However, it was Viloria who came close to being koed, as the much fresher Estrada had him wobbling round the ring with a terrific assault. In the end, the bloody and battered Viloria did well to last the distance. Despite the decision being split, Estrada seemed to win this fight clearly. While it was certainly close and exciting enough to justify a rematch, Estrada could well be just too young and too fast for Viloria at this stage of their careers. Indeed, the still developing Estrada may well prove himself to be one of the better champions out there in the near future and a rematch down the line with ’Chocolatito’ Gonzalez, could prove to be a little classic.

This whole fight card was built around the professional debut of Chinese Amateur star Zou Shiming 1-0, against 18 year old novice Eleazar Valenzuela 2-2-1 (1ko). To his credit, Valenzuela came to fight and gave it his all, but the smiling Shiming was far too fast and experienced for him, and won comfortably on points after 4 rounds. Shiming seemed to enjoy every moment of his professional debut, but even with two Olympic Gold’s amongst his many amateur achievements, he may struggle to cope with a ’fast track’ course to a worlds championship. Talk about Shiming being ready to win a world title within twelve months seems fanciful, unless someone knows something we don’t. His pro debut showed that Shiming’s amateur style is still firmly in place, along with many quirks and mistakes that most decent professionals would take advantage of straightaway. Perhaps most worryingly for Shiming, is that despite his undoubted speed, he also seems to have little power to speak of in his punches.

In another lively encounter, but without the exciting edge of the Viloria vs. Estrada contest, Rocky Martinez 27-1-2 (16koes) retained his WBO Super-Featherweight World Championship, on points, against challenger Diego Magdaleno 23-1 (9koes). The decision again was a split one, but the always aggressive Martinez seemed to have done enough to win with his more forceful attacks against the slicker Magdaleno. The Champion stalked Magdaleno throughout the fight and although the challenger put on a good boxing display, he seemed to lack the power to really take charge of the fight. A Martinez knockdown of the challenger in the 4th round showed the Champions superior power, and although Magdaleno came back well, it was Rocky’s extra strength and aggression which helped him keep his title.

In another upset result, Yasutaka Ishimoto 22-6 (5koes) defeated former WBO Super-Bantamweight World Champion, Wilfredo Vazquez jr 22-3-1 (19koes) on points after ten frenetic rounds. Ishimoto had Vazquez Jr. down in the 8th round, and pushed his advantage in the final rounds to seal his victory.

Rising Flyweight contender Milan Melindo 29-0 (12koes) tkoed Tommy Seran 18-2 (9koes) with a left hook in the 4th round, after having Seran down previously in the 1st and 2nd rounds.

Super-Bantamweight David Penalosa, 6-0 (4koes) koed Cheroenchai Sithsaithong 4-3 (3koes) in the 2nd round, after flooring him in the 1st round.

Unbeaten Featherweight Dodie Boy Penalosa 11-0 (9koes) recovered from a 1st round knockdown by Nimithra Sithsaithong 4-5 (3koes) to floor Nimithra in the 2nd and then ko him in the 3rd with a body shot, that left him face down on the canvas.

Unbeaten Super-Featherweight 18-0 (13koes) scored a 4th round stoppage over Ryusei Yoshida 22-6 (10koes) due to a cut over Yoshida’s left eye.

Top Rank Promoter Bob Arum, knows there is a huge amount of money to be made if he can tap into the enormous 1.4 billion Chinese population on the back of their love for Shiming. Arum will be hoping that this is the first of many such cards which he will take to China, with Zou Shiming as its flag bearer, along with Manny Pacquiao as well, the results could have a huge impact upon the boxing world as a whole. Whether this impact will be a positive one, only time will tell.