Courage comes in many guises. In some fighters courage is obvious. They engage in confrontations, which excite and seem to relish the fights where they are hurt, cut or knocked down. These men seem to enjoy taking punches, after all its what they chose to do for a living. In other fighters, courage is a little harder to define. Indeed, some Boxers do not seem so courageous at all. Some aren’t adapt at going toe to toe in fights, they do not get off the floor to win. There are also those fighters who even seem a little afraid when they fight. The eyes tell the story. Wide and unfocused, the lips twitching and dry. To be afraid is natural in boxing, but to show that fear nakedly in the ring, is the biggest taboo. Over the course of his twelve year professional career, Audley Harrison has emerged as the latter fighter. He does not fight like a boxer who enjoys being hit. Audley doesn’t have that poker face of a warrior, when taking fistic punishment. He often visibly flinches when taking punches and he has never taken a punch that well. 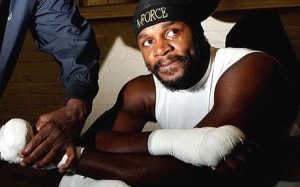 It’s fair to say that Harrisons pro career, which began amid much fanfare and a bumper one million pounds ten fight contract with the BBC, has been a failure. Indeed at times it has been an embarrassment, in that it has fallen so far short of what was once promised. Once feted for his Gold medal triumph at the 2000 Olympic Games, Audley has become a largely derisory figure within boxing circles, especially in Britain, where he is arguably the most unpopular boxer of his era. One title which he certainly didn’t hope for at the beginning of his career. The old adage that the British love a good loser, has never rung true for Harrison.

When did things begin to go sour for Audley?. By his own admission turning professional with such a huge price tag upon his opening ten fights was a huge mistake, in that it placed unrealistic expectations on ’A-Force’. Part of the problem stems from the fact that Audley has always been a technical ’boxer’ rather than a rugged ’fighter’ like most fans prefer their fighters to be, especially their Heavyweights. The hit and not get hit style which won Audley Olympic honours, does not sit so well in the rough and tumble of the pro ranks.
When it became clear that Audley was not going to be the second coming of the big punching 80s and 90s fan favourite Frank Bruno, or even the technically superior, but less popular Lennox Lewis, the BBC pulled the plug on Audley.

Having remained unbeaten up until this point, all be it unimpressively to the public at large, Harrison’s career went into a tailspin after the loss of his contract with the BBC and the resulting collapse of his own promotional company. Harrison would later state this as being a point where he lost confidence in himself and certainly his ring performances at this time, bare this out.

Points losses to domestic rival Danny Williams, and American Dominick Guinn saw Harrison truly lose his way, and his career has never really regained its composure since this time. A boxing public which had been apathetic and disappointed with Harrison, became widely hostile, after he was knocked out in the 3rd round by Michael Sprott. The best known secret about Harrison was out, Audley’s reticence at taking punches had good reason. He has no chin.

Since the Sprott defeat, Audley has largely been ridiculed, and seen his once proud nick-name A-Force morphed into A-Farce and his first name rechristened Fraudly by ‘fans‘. It is difficult to think of a fighter who has endured more public abuse in recent times. There have been some brief career resurgences for Harrison, when it looked as if he might finally live up to some of his earlier promise. These include Harrison winning the popular ’Prizefighter’ competition twice, and the European Heavyweight title, against former conqueror Michael Sprott in 2010.
But the resurgences have always led to further humiliations for Audley. After winning ‘Prizefighter’ for the first time, then coming from behind to knockout Sprott for the European title, Harrison was stopped in 3 rounds by David Haye, a fight in which he landed just one punch.
Another come back win led to Audley facing David Price last year, and being stopped in the first round. Again Harrison had to face a glut of public criticism, and calls for him to retire. The calls for Audleys retirement seem to be made not so much out of public worry for his welfare, but rather generate from the genuine dislike much of the public has for Harrison. If courage is to be measured by the amount of abuse a person can endure and still stand by their belief in themselves, then Audley is indeed a courageous individual. Not to mention, also a very stubborn one. Through all the tumultuous ups and downs, and disappointments of his career, Audley has continued stating his belief that he will fulfil his dreams of one day winning the worlds heavyweight championship. Fanciful as these boasts are, they have only served to attract more virulence and ridicule for Harrison from the boxing public.

It has been both Audley’s gift and his curse, that as a professional, he has always been able to talk a far better fight out of the ring than he can deliver inside it. And yet, it is difficult not to hold some respect for the sheer stubbornness and resilience that Audley has displayed in the face of such continued negativity towards himself in recent years. Many, would have given up and gone away into obscurity long ago. After his loss to Price last October, in just a round, few believed that Audley would be seen inside a boxing ring again, at least not as a boxer. Then in February, Harrison wrong footed his critics again by winning ’Prizefighter’ for the second time. It is no coincidence that former Olympian Audley does so well in the ’Prizefighter’ format of fighting three round fights, and this very success underlines his shortcomings as a professional. However he still managed to impress to some degree in this latest comeback, if only for the sheer unexpectedness of it for most people. This interest has resulted in Audley landing his fight with Deontay Wilder, a fight which surely, is the last chance for the now forty one year old Harrison to get anywhere near to the top of the Heavyweight division.

Wilder is 6 feet 7 and at 27 years of age is 14 years Harrisons junior. With an unbeaten 27-0 record, (all by knockout), Wilder has been hailed by some as the saviour of the American heavyweights, and perhaps the future of the division itself. However his opposition has been carefully picked out for him and Audley for all his flaws, is in many ways the first real ’test’ that the ’Bronze Bomber’ has faced.

However, despite the limitations of his opposition up till now, there seems to be little doubt that Wilder can punch, and punch hard. With this in mind, this fight is a courageous match for Audley to take, especially at this point in his career when there might well have been some easier options. It is very much an all or nothing fight for Harrison, win and he will have gained probably the best victory of his career, and will go right back up into contention, lose, and it’s the end of the line.

In many ways it is a brave fight for both men to take. For Wilder, a defeat against Harrison would be a calamitous set back from which his career might never recover.

Despite all his flaws, Audley can punch. As he has shown on occasion when the mood takes him, such as in what was probably his best performance to date, when with an injured shoulder, and behind on points, he knocked out Michael Sprott with one punch from his good arm, to win the European title in 2010. It was a performance that showed Audley in a new light. Yet in his next outing he was humiliated by David Haye.

If anything, Audley seems to be playing down his chances of causing any kind of upset in this fight, admitting to having had the worse of it when he sparred with Wilder shortly before his debacle against David Price. Indeed there has been discussion over whether Audleys hard sparring with Wilder served to soften him up for Price.

Even with all his undoubted technical ability and experience, it is unlikely that Audley will be able to avoid Wilders bombs for the full distance of their fight. Harrisons only hope of victory looks to be to try and expose a flaw in Wilders own chin, and try and end the fight early. Whether the usually counterpunching and ultra cautious Harrison can bring himself to fight in such a way remains to be seen, and holds the key to perhaps what is left of his career.

How this fight goes depends a lot on how much Audley really believes inside that he can win. Perhaps the best he is hoping for is to go down fighting, in this, his last chance at glory, and to silence the critics with a brave final stand.

Sometimes the most courageous thing a person can do is walk towards certain defeat with hands raised and head unbowed.