Nathan Cleverly 26-0 (12 KOs) gave a dominant performance in out-pointing Robin Krasniqi 39-3 (15 KOs) and retaining his WBO World Light-heavyweight championship, on Saturday night, at London’s Wembly Arena. Making the fifth defence of his title, Cleverly displayed a classy mix of aggressive boxing to have the game Serbian born challenger on the back foot for much of the contest. 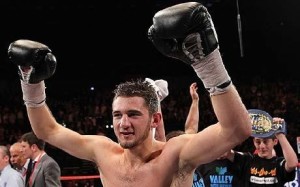 From the outset, the Welshman got his fast and persistent jab into Krasniqi’s face, as he looked for openings for his right-hand. During the first round, a Cleverly right seemed to shake the challenger, and although Krasniqi got himself back together, the round ended with the Welsh Champion in full control. Cleverly was to retain control of the fight pretty much throughout the rest of the contest, coming forward behind his constant jab, which kept the German based challenger off balance and generally too preoccupied with defence to mount attacks of his own. While Cleverly’s jab does not seem to carry much weight, it is constant and accurate, and its frequency alone causes his opponents problems. Krasniqi seemed to have trouble dealing with the champions high work rate and overall speed and when Cleverly unleashed his bursts of combinations, it looked at times as if Krasniqi was about to be totally overwhelmed. These bursts by Cleverly occurred in about every round and made sure that he underlined his domination of the contest.

Krasniqi tried to come forward more in the 6th and 7th rounds, in an attempt to stem the champions control, but faced with more resistance Cleverly upped his work-rate and regained his hold on the fight. Over the last third of the fight Cleverly seemed to settle for a point’s victory and was content to concentrate on keeping Krasniqi at bay with the jab and occasional combination. The Challenger continued to try his best but was simply outmaneuvered and out worked. At times Cleverly seemed almost too relaxed and he could have perhaps gone more for the stoppage in the later rounds but the fact is that he is not a big puncher at world level and concentrates on his strengths, which are his sound technique, and his speed.

The Judge’s point’s verdicts for Cleverly at the end read 120-108, 119-109, and 120- 108, illustrated the control that the Welshman had enjoyed,. However, the scores didn’t show the effort which the game Krasniqi had put into trying to stay in touch with the champion throughout the fight.

Cleverly’s victory may now have opened the way for a unification fight with the legendary IBF Champion Bernard Hopkins. Promoter Frank Warren has said that he would allow Cleverly to fight Hopkins in either London or America and that an outline of a deal has already been previously in place before it was shelved due to Cleverly having to face his mandatory challenger Krasniqi.

How would Cleverly fare against Hopkins if the two do end up in the ring together? It would certainly be an interesting match of styles. Hopkins masterful counter punching against Cleverly’s high tempo box-fighting. One interesting fact that may be a reason for Warrens eagerness for his fighter to face Hopkins, aside from the obvious element of Cleverly’s huge age advantage, is the similarity in style between Cleverly and his previous stablemate and mentor Joe Calzaghe, who holds a decision victory over Hopkins. Although Cleverly cannot claim to have reached the heights of his Welsh compatriot yet, his busy, jab led, boxing style has strong comparisons to Calzaghe, and could be a key for him to gain a victory over Hopkins. Cleverly has certainly now reached the stage of his career where he needs some big fights against some elite fighters, in order to show just how good he can be.

The best fight of Wembly’s lively ’Rule Britannia’ card was the WBO European Lightweight championship between Liam Walsh 14-0 (10 KOs) and Scott Harrison 27-3-2 (15 KOs). With so many multiple ’world titles’ now dominating boxing it is a shame to now see multiple ’European’ champions, and this was a fight that didn’t need a title to make it an intriguing match-up. Going into this bout there were many who believed that defending champion Walsh would have an easy night with ex WBO World Featherweight titleholder Harrison, who had fought just two times in eight years due to a myriad of well-known alcohol and legal problems. However, Harrison ended up giving Walsh the fight of his life and a glimpse of the talent, which has been sadly wasted and ravaged by addiction. At times Harrison looked like he was going to turn the clock back and claim a tremendous victory.

Both started quickly, with Walsh using his jab and movement, and Harrison coming forward, looking to pressure the Norfolk boxer. After missing a bit in the early rounds, Harrison found his range and started to land some good shots to the head and body. The Scots body attack was reminiscent of his championship days and Walsh was unable to keep him away and forced to go toe to toe at times, which resulted in some excellent exchanges. Although Walsh had an edge in hand speed and mobility, the Scot carried more power in his punches and once warmed up seemed surprisingly sharp himself. The middle rounds saw Harrison with the edge as the champion struggled to keep him off and keep the distance between the so he could use his southpaw jab. Walsh even switched stances a couple of times in an effort to frustrate the onrushing Scot, who was almost throwing himself at Walsh at times in his effort to overpower him.

The tremendous pace finally began to tell on the 35-year-old Scot in the later rounds as Walsh was able to get his jab going more and began getting the better of the still frequent toe-to-toe exchanges. In a furious 9th round as the marauding Harrison tried to throw everything he had left at Walsh, the Champions response had Harrison hurt and wobbly at the bell. The tenth and final round saw the brave but weary Harrison still in pursuit, as Walsh’s jabs and movement took the round. The unanimous decision for Walsh, by scores 98-92, 97-93 and 97-93 seemed a little wide to me.
Although he lost Scott Harrison showed that he is still a very useful fighter, at least on the European level, and if he can keep his life out of the ring on track then there could still be some interesting contests out there for him at domestic level.

Walsh showed that despite his relative inexperience he is a useful boxer, who performs well under pressure and is not afraid of getting into the trenches when the need arises, whether he can make it to world level though it is too early to say.

Another promising boxer on the card was Cheshire Super-flyweight Paul Butler 11-0 (6 KOs) who added the Commonwealth title to his British belt with a scintillating 5th round stoppage over defending champion Yaqub Kareem 10-3(7 KOs). Butler, who calls himself the ’Baby Faced Assassin’ in honour of his hero, Marco Antonio Barrera, fought in a manner which would have pleased the Mexican legend, with a constant and ferocious attack, which rendered Kareem defenceless by the 5th and provoked the referees stoppage. Butler has been a professional for less than two years and with his fast and aggressive, all action style could be a little star in the making if he continues his meteoric success.

The biggest disappointment of the night was Dereck Chisora’s 16-4 (10 KOs) fight with Argentine Hector Alfredo Avila 20-13-1 (13 KOs). In what was supposed to be a simple tune up fight towards bigger things in the future, Chisora put on a performance, which left many wondering what he has left as a fighter. The contest was the last of the night and at times, it seemed that the boxers and the Arena’s few remaining spectators were all falling asleep together. The action was sloppy and mauling, with the Argentine having points taken away for holding in the 6th, 8th and 9th rounds. If the 38-year-old Avila was content to just survive, the poorly conditioned Chisora looked ill equipped to do much offensive work of his own. Indeed, Chisora looked just a shadow of the fighter who fought Vitali Klitschenko just 14 months ago, whether this was through lack of motivation rather than anything more permanent, only time and future fights will tell us. Certainly, there were points in his fight with Avila where ‘Del Boy’ looked ‘shot’ and one wonders whether his back-to-back losses to Klitschenko and Haye have left a physical or psychological mark.
Chisora eventually won via a 9th round stoppage after Avila had gone down under some ponderous Chisora shots, and on getting back to his feet was stopped from continuing by the referee, much to the relief of everyone concerned it seemed.

The Chisora fight aside, the ‘Rule Britannia’ promotion was a lively card with its fair share of entertaining fights, and the well filled Wembly Arena showed that the London fight fan is still alive and well when given the opportunity to see some live boxing. Frank Warren also showed that despite some recent defections he still has some useful rising talents in his stable of fighters.

Other fights on the undercard were the following….