One got the feeling that not even a Canelo TKO win via decapitation last Saturday night at the Alamodome in San Antonio, Texas would’ve silenced the critics. Alvarez could’ve stepped over Austin Trout’s headless body to crush the rest of Team Trout by hand and then hop on a bus to Las Cruces, New Mexico to lay waste to Trout’s hometown police force and it wouldn’t have changed a single mind. The supporters weren’t going to be swayed and the critics would never be convinced. 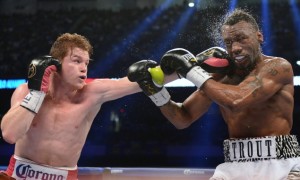 We’ve been around the block enough times to know when a lose-lose is going down. Alvarez-Trout was a lose-lose for the 22-year-old world champ and he knew it. His people knew it. It’s the reason everyone on Team Canelo gave a long, awkward pause when the topic of a Trout fight came up last year.

Ideally, Alvarez’s coming out party would’ve been against another offense-minded pug who would put up a valiant effort, but eventually be ground down by the young star. Trout wasn’t going to go out like that. Alvarez knew that and, to his credit, signed on for the fight anyway.

Austin Trout is a sleight of hand guy, not necessarily slick, but deceptive. He exploits his long reach to fill rounds with copious amounts of go-nowhere busy work and backs that up with enough athleticism and ring smarts to stay out of trouble. Trout wins rounds by beating around his opponent, rather than beating up his opponent. Frankly, he fights like a small town fighter used to getting decision based merely on his willingness to throw punches. He fights to keep things close, rather than to actually close the show. Except for a 2011 TKO over hapless, hopeless Frank LoPorto, Trout hasn’t been in the “hurt” business since early 2009. This is not a coincidence.

Alvarez, coming into the Trout contest, was giving away every possible physical advantage. Trout was bigger, taller, more athletic, and had a longer reach. He was also a southpaw. So, not only would Alvarez be facing a tough stylistic challenge, but he’d also be fighting one whose physical dimensions helped him make for a tough evening.

From the opening bell it was obvious that Alvarez was going to have a tough time with the Trout riddle.

The WBA titlist from Las Cruces flicked out an empty jab that allowed for plenty of space between him and Alvarez’s short-armed power. Those who score empty, meaningless fist churning were, no doubt, stacking up rounds for “No Doubt” Trout. But missing 357 jabs (according to Compubox) and connecting at a pitiful 20% overall rate against a guy who is hardly Pernell Whitaker shows just how much of Trout’s ring work was actually just busy work. By comparison, Nonito Donaire’s connect percentages against Guillermo Rigondeaux were almost identical to Trout’s. And Canelo Alvarez is no Guillermo Rigondeaux.

When there was actually fighting going on, Alvarez had the clear edge (and even managed to drop Trout in the seventh). It’s just that everyone had to sit through 2:30 of Alvarez dealing with Trout’s passive-aggressive offense before getting to the good parts.

Yes, Canelo Alvarez had no answer for Trout’s busy work and could never really get past the physical disadvantages he had in this match-up. He did what he could, though, and despite losing several rounds to Trout’s empty air jab, the kid from Guadalajara did enough to win. Again, those who score fists rather than fight likely saw things quite differently.

My scorecard read 114-113 for Alvarez– the type of closeness expected of a showdown between universally-recognized Top Three fighters. Judge Stanley Christodoulou, however, issued a horrid 118-109 score in favor of Canelo, immediately giving all the critics and cynics an escape clause from having to finally give Alvarez a small morsel of credit. The Universo Pugilistico and its cyberspace outlets reacted accordingly as “experts” wedged themselves out of their La-Z-Boys to react with calculated outrage and fans assumed whatever position in the Canelo debate they held before the fight.

So, what did we learn from this whole thing?

Team Canelo was right to want to stay away from a fighter like Trout. And for every top fighter watching this contest, a lesson was learned– Why take on a truly tough challenge, running the risk of looking bad and losing your lofty spot at the top of the boxing food chain? In cases like this, even when you win, you lose.

Of course, none of this is new. Rising stars have been side-stepping less marketable risky opponents ever since there have been fans around to call them yellow. And the reason for that was on display Saturday night when Canelo got little credit for beating a guy recognized by everyone as a Top Three junior middleweight.

As for open scoring– Well, it sucks. But knowing he was well behind on two judges’ scorecards didn’t light a fire under Trout’s ass or make him throw caution to the wind to try and stop Alvarez. It’s not a good addition to the sport, in my opinion, but in this case its effects were minimal to nonexistent.

Canelo-Trout was just a good night of boxing. The right guy won. Not everything has to be a scandalous drama.

You can email Paul at paulmagno@theboxingtribune.com or watch as he starts his own awesome podcast with Hip-Hop bumper music and  six chubby boxing experts– Three more than the leading boxing podcast. It’s gonna be way cool! Paul is a full member of the Burger King Kids’ Club, a born iconoclast, and an ordained minister in the Universal Life Church.