Saturday, live from the Motorpoint Arena in Sheffield, Yorkshire, United Kingdom, “The Bronze Bomber” Deontay Wilder (27-0, 27KOs) will be facing off against southpaw Audley Harrison (31-6, 23KOs). The fighters are the scheduled attraction on the undercard of the Amir Khan vs Julio Diaz bout. Fight time is 7:00pm in the UK and 2:00pm EST. 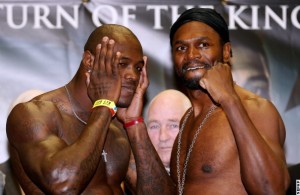 Both men are generally considered big for the division, joining the over-sized ranks of such heavyweights as the Klitchko Brothers, U.S. based Tony Tompson, the other UK heavyweight hopefuls, Tyson Fury and David Price (who previously stopped Harrison in the first round of their 2012 match up) and Russian monster, Nikolay Valuev (who hasn’t fought since losing to Brit David Haye in 2009). Haye defeated Harrison three years ago by (suspicious) TKO in the third round of their main event snoozer.

Since that time, Audley Harrison has re-applied himself to the sport, winning the UK based ‘Prizefighter’ TV series for a second time. The former Olympic gold medalist obviously wants the biggest money fights out there due to his advanced age (41), however, a rematch with David Price and a showdown with Mancunian Tyson Fury sits atop of his personal hit list.

First, though, he needs to get past former Olympic bronze medalist, the undefeated knockout machine, Deontay Wilder. Many point to the fact that the Bronze Bomber is largely untested, and rightfully so – Most of the Alabama black snake’s wins are over professional taxi drivers and buffet service attendants. Audley Harrison will be the biggest scalp on his resume if he manages to add the Brit’s name to his KO column.

Wilder will enjoy a two inch height advantage come fight night, however, the Londoner has the reach by a two full inches and holds the edge in experience. Whether or not he’ll be in position to use those resources when the bombs start flying on Saturday remains to be seen.

The two fighters have a mutual respect for one another, having shared sparring sessions in the past. “You can say what you want about Audley [but], this guy is a warrior…” expounded Wilder “He falls and gets back up, you have got to watch out for him…I’m definitely not taking it for granted.” The Bronze Bomber concluded “The difference between me and him is I am lean and mean, slick and quick, mobile and hostile, baby. I have the heart of a lion…People call me the Knockout King – I didn’t say it, it was given to me, but I have to keep that going.”

Both fighters looked ready and in top condition at the weigh-in. Deontay Wilder recorded a 224.5 lb reading and Audley Harrison was slightly heavier at 236.4 lbs.

Look for Wilder to start fast and try to out-muscle the aged veteran fighter. Harrison will find success in spots with his improved timing and educated shot selection, however, the more athletic Bronze Bomber will close the show with a spectacular overhand right set up by left hooks to the elder boxer’s body; Harrison will crash to Earth and the referee’s hand will be forced to concede a TKO under 7 rounds.