There were no surprises at the SAP-Arena on Saturday as IBF, WBA, and WBO heavyweight champ, Wladimir Klitschko (60-3, 51 KOs) walked right through supremely overmatched Francesco Pianeta (28-1-1, 15 KOs) en route to an easy sixth round TKO victory. 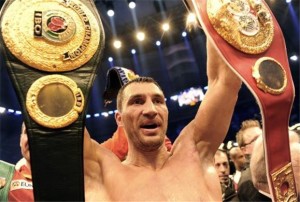 Pianeta, who had somehow achieved a no. 7 ranking in the WBA on the weight of wins over faded veterans Frans Botha and Oliver McCall, had nothing whatsoever to bring to this contest. Klitschko simply walked him down, eventually found the openings, and closed the show as soon as he decided to up the level of his own output.

A 1-2 combination in the fourth round would drop the hapless Italian challenger and a similar combination would close the show in the sixth. All in all, it was an easy night’s work for Klitschko, who saw no significant punches thrown his way and, actually, barely broke a sweat.

A harder road for Klitschko is ahead, though, as tough Bulgarian contender, Kubrat Pulev occupies the mandatory no. 1 slot in the IBF and heavy-handed “Nordic Nightmare” Robert Helenius holds the mandatory slot for the WBO.

On the undercard, Cuban-born and Ireland-based heavyweight, Mike Perez (19-0, 12 KOs) scored a unanimous decision victory over American journeyman Travis Walker (39-10-1, 31 KOs) in a yawn-inducing ten round contest. This was Perez’s first bout since decisioning Friday Ahunanya back in December of 2011.