It’s considered by many to be one of the greatest upsets in boxing history. The night a 15-1 underdog met a seemingly invincible and undefeated champion and shocked the boxing world. Frankie “The Surgeon” Randall and Julio Cesar Chavez met on January 29th, 1994 at the MGM Grand in Las Vegas, Nevada to contest for Chavez’s WBC light welterweight championship. 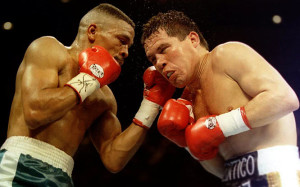 Chavez at the time was undefeated in 90 professional bouts. With a record of 89-0-1 (77 KO’s), he was considered by many to be boxing’s top pound for pound player of the time and is still considered by many to be one of Mexico’s greatest boxers ever. He had held the WBC light welterweight title for nearly five years, after defeating Roger Mayweather in 1989 to win the belt, and had made 13 successful defenses; Greg Haugen, Hector Camacho, Terrance Alli, and Andy Holligan being some of his more recent victims.

Four years earlier in 1990, Chavez had met U.S. Olympian Meldrick Taylor, the undefeated IBF light welterweight champion, in a unification bout at the Hilton Hotel in Las Vegas. Taylor put on a boxing clinic, and had the fight all but won when in the 12 and final round, Chavez unleashed a looping right hand the dropped him. Despite being on his feet at the count of six, referee Richard Steele waved off the bout, giving Chavez the win with just two seconds left to go in the bout. Many felt the fight should have continued, and that Taylor was cheated out of the victory being a victim of Steele’s poor decision.

In 1993, the once defeated, multiple world lightweight title holder Pernell Whitaker appeared to have Chavez beaten, only to have the fight declared a majority draw. This time it wasn’t the referee being questioned, but the two judges who didn’t score the bout for “Sweet Pea”.

In spite of feelings that Chavez may have been slipping, Randall was still a solid underdog coming into the fight, and with good reason. Though he held an impressive 48-2-1 (39 KO’s) record, a closer look showed his ledger to be littered with sub-par opposition. His last opponent prior to the Chavez bout had an 0-9 record and within a 17 bout win streak leading up to the fight (and a seven fight KO streak), this level of opposition seemed to be the norm; 10 of those 17 wins came against boxers with sub .500 records.

Randall did meet a handful of credible opponents on his way up the ladder: he had beaten and drew with Freddie Pendleton in two bouts, and after losing to Edwin Rosario in 1985, stopped Rosario in a rematch eight years later. Good fighters, but still nothing near the level of Chavez, and because of that Chavez was expected to win easily.

It was different story come fight night. Much like Taylor had done, Randall used his footwork and hand speed to outbox the Mexican legend. Chavez did all he could to cut down “The Surgeon”, but Randall stuck to the game plan. What was a close and competitive fight became even closer when Chavez was deducted two points for hitting below the belt, once in the seventh and 11th rounds, He was clearly in a spot where he needed to win the final two frames to secure victory.

The fight was nearing its completion, and Randall was within reach of a dream 90 other opponents had failed to realize, so Frankie put the icing on the cake. With 30 seconds left in the 11th round, he launched a straight right that caught the defending champion square on the chin; Julio Cesar Chavez had been dropped for the first time in his career. Chavez was already in a bad way, but as ringside commentator Ferdie Pacheco said following Randall’s feat, “and now it’s good-bye title”.

The final round was nothing special, neither fighter fought with a sense of urgency though Chavez really should have. As the final bell rang, it seemed we were watching history in the making. Frankie Randall knew in his heart he had it won, “I did it! Good God gave me the will, I did it!” he shouted at the cameras.

A chorus of boos rang out from the crowd as ring announcer Jimmy Lennon Jr. announced a split decision: 116-111 for Randall, 114-113 for Chavez, and 114-113 for Randall. One point, decided by point deductions and a knockdown had dealt the Mexican warrior his first loss in 91 fights.

While Randall thanked God…and Don King, Chavez ironically blamed referee Richard Steele for the point deductions; to Chavez, the same man who had saved his world title four years earlier had cost him his title this time. Maybe he had a point, maybe he didn’t. Bottom line is he had just lost.

The two would fight twice more over the course of their careers, the rematch taking place less than four months later, again at the MGM Grand. This time Chavez would manage to regain the world title when an accidental head butt suffered by Chavez caused the fight to be stopped in the eighth round with Chavez winning a close, but split technical decision.

Knowing better than to fight Randall a third time straight away, Chavez went on to defeat a faded Meldrick Taylor via eighth round TKO in a rematch that took place four years too late. He made five more successful title defenses before being stopped by Oscar De La Hoya in 1996. He would never again hold a world title, his remaining victories coming against B level opposition while losing again to De La Hoya, Willy Wise, Kostya Tszyu, and in his final professional bout, Grover Wiley.

Randall would take part in a trilogy with Juan Martin Coggi, which saw the WBA light welterweight title bounce back and forth between the two fighters, Randall winning the first and third bouts, Coggi taking the second. After winning the rubber match against Coggi, Randall would go on a severe losing streak: from 1997 until his final bout in 2005 he would amass a record of 5-14, being stopped in his last three bouts.

The Chavez-Randall rubber match wouldn’t take place until 2004, when both fighters were well past their expiration dates and the fight held no significance other than being part of Julio Cesar Chavez’s fare-well tour. Chavez would win a decisively by scores of 99-91, and 98-92 twice.