First, I must legally acknowledge the fact that I “stole” the title of this week’s column from 19th Century Russian writer, Fyodor Dostoevsky. When I don’t mention this, some fake mean blogger has a Twitter tizzy and says really snarky things about me.

Anyway, this week’s Rant will revisit the Notes from the Underground concept, dedicated to short, bite-sized nuggets of controversy and (in)sanity from the boxing world, filtered through the jaded eyes of this happy, bomb-throwing boxing outsider. 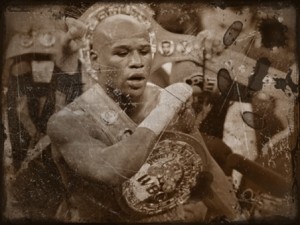 I DESPISE the idea of fraternal orders and secret societies among boxing scribes. If you ever go on Twitter and follow some of these writer-types, all you will see is ass-patting and “at a boys!” And while these guys are huddling up in groups, convincing one another of their awesomeness, the sport continues to suffer from the same evils as always. Personally, I’m embarrassed to say that I’m part of a media generation that has, literally, accomplished nothing. But these other guys aren’t embarrassed at all. By gauging the egos and level of self-importance on display, one would think that this was a golden age of boxing journalism and/or analysis.

The problem with these little cliques is that, almost immediately, the work becomes about pleasing their peers rather than serving a real purpose. What happens to media watchdogs who become engaged in Caligula-style man-love with other media types? Suddenly, certain people are off limits and certain unpopular themes are cast aside. Hard-hitting analysis becomes replaced by masturbatory exhibitions of dry wit and flowery prose. Critical thought doesn’t exactly flourish in an atmosphere of group think. And, as a writer, you have a choice of either being everyone’s “bro” or doing your job. Some branches of journalism can have it both ways, boxing has proven that it cannot. With the creeps ruling the roost and happy hobbyists filling most every other free spot, boxing writers can’t live for the love of their fellow man while also being conscientious about their job.

Earlier this week, I did an interview with former Chief Executive Officer of the Australian Sports Anti-Doping Authority (ASADA), Richard Ings about the state of PEDs use in the sport and whether any current efforts are getting us closer to making a real reform in the sport.

In a nutshell, Mr. Ings confirmed my suspicions that only true 24/7, 365 random testing could guarantee a truly clean sport and that current voluntary testing is virtually useless busy work, mostly for cosmetic purposes.

Breaking the blogger blacklisting of my work, The Queensbury Rules’ Tim Starks made this comment in one of his “Quick Jabs” columns:

My question to Starks, which will probably go unanswered, is: What “good” came of VADA and USADA “popping” Andre Berto, Lamont Peterson, or Erik Morales? None of these fighters faced any real sanctions or suffered anything more than some bad publicity. Berto and Peterson were back in the ring as soon as they wanted and Morales laughed off his “punishment” by the USADA. Peterson, who got “popped” prior to his planned rematch with Amir Khan and would later admit to using the same substance in his title-winning effort against Khan last year, was even allowed to keep his IBF belt.

I’ve used the analogy before, but voluntary testing without any real commission bite behind it is like vacuuming your rug without a bag attached to the vacuum cleaner. It just cleans one very small area, but sends an infinite amount of dirt into the air. It’s all an exercise in futility unless some commission is willing to actually respect these tests done outside of their jurisdiction and beyond the scope of their own testing. And, for various reasons, the commissions will never fully enforce this type of voluntary testing.

Without real repercussions, any effort at testing is useless. As Ings said, “The collection of samples is the simplest aspect of anti-doping. It is the independent management of any positive and the mutual recognition of any sanction that is critical.”

And while a few voluntary tests are floated into the public’s eye to give the impression of propriety, the heat is off the commissions, who might otherwise feel real pressure to update their ridiculously outdated testing protocol.

The big fight was announced last week and I guess I should write something about it.

It’s a good fight (there will be more on the ridiculous catchweight clause in another Rant), but enough with the “Floyd is finally taking a risk” chatter! Every fight is a risk in boxing and it’s certainly not his fault if he’s significantly better than the best opposition made available to him. So, what the hell is he supposed to do to make things “riskier”, fight two guys at once? How about wear ankle weights and an eye patch? How about if he chugs a gallon of milk between each round?

Just because something is repeated over and over again, it doesn’t automatically become truth.

Other than Pacquiao, an opponent that was never going to be realistic for many, many reasons, who else has Mayweather “ducked” since breaking free from Top Rank several years ago? If you’re going to make the statement that Mayweather wants the glory of being no. 1 without the risk, please do tell– who are the killers that make him cower in his jammies? Or could it just be that those who make such statements are just naive or, perhaps, are riding spiteful agendas?

The current version of “Bad” Chad adds nothing to boxing, but a fired up and motivated Dawson could be a big deal. It’s unrealistic to ask for more than a cold, measured, professional performance from the talented boxer, but if Dawson could ever manage to add that X-Factor to his game, he’d be a real star. At 30 years of age and after taking an ass-whupping at the hands of Andre Ward last September, it’s more likely that Dawson is on his way out than on his way up, but hope springs eternal when looking over a sadly barren American fight scene. And, contrary to what’s noted in the full-time bashing he receives online, there have been moments, here and there, where the laid-back stylist has fought with a spark. It doesn’t happen too often, but a motivated Dawson is a great thing to behold.

I’m fully expecting that his opponent this Saturday Adonis Stevenson, will bludgeon him into submission and take the WBC light heavyweight title from him. But there’s also the slim, slim chance that the mega-aggressive Stevenson will force Dawson out of his shell and push him to a point where Dawson actually lets his hands go.

For Dawson, this fight will be do or die. Most of the public has already lost interest in him as a fighter and a second high-profile defeat will be the perfect excuse to bury him and remove him from the main stage. If Dawson has this in mind when he fights, things could get real interesting.

If there was an award for worst, most vulnerable pound-for-pound talent, Cuba’s Gamboa would win easily.

This Saturday, on the Dawson-Stevenson undercard from Montreal, Gamboa takes on Colombia’s Darley Perez in his official lightweight debut. When Gamboa can be hit, he can be hurt and frequent lapses in concentration make a KO loss always a possibility. Few fighters in the sport have more raw talent than 50 Cent’s centerpiece fighter in the SMS Boxing family, but the guy is an upset ready top happen. And, given his quickly hushed-up connection with alleged Miami-based PEDs distributing anti-aging clinic, Biogenics, he could also possibly be heading towards a train wreck in his personal life.

Also on Saturday, offered up by Showtime to compete with HBO’s Dawson-Stevenson card, we’ll have yet another candidate for Fight of the Year. How can it be anything else? It doesn’t take a matchmaking genius to recognize that a come forward brawler meeting a never-retreating blue collar battler will result in a memorable war. Both fighters are limited and neither will ever be an elite champion, but, pound-for-pound, few other fighters have given us more honest, earnest action in the ring.