Hello team and welcome to another star-spangled edition of boxing’s Sunday Brunch. This week we’re going to be hitting on a variety of topics including: Tony The Tiger’s big win across the pond and what’s next for him, Billy Dib and why he’s so damn happy, Miguel Cotto news and as usual, a bonus recipe to conclude the 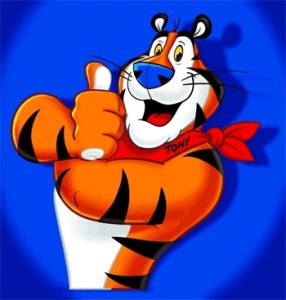 proceedings. We are the 33 dollar over-draft fee you received for going just a couple of pennies over your limit – With that being said, I gave you your instructions in the dressing room, what I say you must obey – Cuidate, escucha me, toca los manos y buena suerte…Let’s get it on!

41 year-old Tony Thompson secured another stoppage victory over former Olympic bronze medalist, David Price this past Saturday from the Echo Arena over in Liverpool. Towards the end of the second round, Thompson hit the deck due to a sequence of right hands that set up a huge overhand right.

Tony The Tiger looked to be on steady legs to begin the third but was caught by (you guessed it) another right hand, this time by his temple, that sent him reeling into the ropes. The Maryland native recovered well and began to chip away at the punch-weary Price. Using a veteran selection of punches, The Tiger continued to break down the 6’8″ hometown fighter and by the end of the fourth frame, David Price was all but out on his feet.

The final round of the evening turned out to be the very next one – in the fifth, Thompson found a home for more and more hard body shots that visibly drained the man from Merseyside. A couple of uppercuts and nearly 30 unanswered punches later, the British referee finally stepped in to issue a count. David Price appeared unable to continue and the bout was waived off. The official time was 1:55 of round number five.

So, where does The Tiger go from here? He’s already been at the pinnacle of the division twice and failed both times (the rematch with Wladimir Klitchko ended in six rounds, their first fight in 11). A third meeting with the Ukrainian killer seems unlikely; I suggest a big heavyweight match up with Deontay Wilder. For the Bronze Bomber, Thompson would be a solid step-up kind of a test against a cagey veteran – for The Tiger, Wilder’s inexperience may be a boon but he’d have to get past his athleticism and explosiveness first. Another possible fight would be with David Haye. The Londoner is extremely powerful and quick, but Thompson may have a higher boxing intellect, so it could be very interesting to see how this one would play out.

In other news, Miguel Cotto signed a return deal with Top Rank, Cotto left for a few fights in order to face Mayweather and Trout. The Caguas Crusher reportedly still has good working relationships with Golden Boy, HBO and Showtime. The Puerto Rican super star will also be taking on the services of Freddy Roach. The hall of fame trainer will have a unique insight for Miguel, coach Roach has sat across the ring while his top pupil dismantled him in merciless fashion some years back.

Various outlets are reporting that Carlos Molina will get the nod to face Cotto but sources close to the situation lead me to believe that it’ll likely be Connecticut’s Delvin Rodriquez who will stand opposite from Miguel Cotto for his next fight. Cotto’s return bout is looking like it will be held in either Miami or Orlando, Florida.

1. Joshua Clottey recently inked a deal with Star Boxing. It will be great to see Clottey back in the ring. The Ghanaian used to train very hard for fights, hopefully all this time off won’t affect how he performs. I still maintain that The Grand Master didn’t try to beat Pacquiao and perhaps a few extra Texas dollars found their way into his bank account for his “good effort”.

2. What’s with Billy Dib? He’s so damn happy it’s disgusting. I guess when Floyd and Curtis had their divorce, the custody rights over little Billy went to 50 Cent – Mayweather is currently dating Lil’ Wayne, anyway.

3. A recent photo of Julio Chavez Jr. surfaced with him looking quite doughy and large. Either Chavez is still training everyday with great passion but is moving up to heavyweight, or is training everyday on Fight Night for PS3, eating foie gras laden filets of steak and smoking massive amounts of weed.

4. Best quote of the month goes to Tony Thompson after his win over David Price this weekend – “Hey man, I’m going to go home and break my wife’s hip. I haven’t had sex with her in a while, she is going to feel the pain…” “…And the pleasure…” [cuts in the interviewer] “Oh, there’s going to be some pleasure mixed in there but she might be crippled…If anyone wants to donate a wheelchair to the Save the Mrs. Thompson Fund…”

This week we’re going to be having a classic family-style dish you can serve at your next 4th of July party, American meatloaf! For this delicious, world-wide dish you will need 10 pounds of ground beef (80/20 preferably), 1 Qt. of a good ketchup, 1 large white onion cut into 1/4 ” dice, 4 large tomatoes cut into 1/4″ dice, 8 eggs plus 2 yolks, 2Tbs. granulated garlic, 1Tbs. sea salt, 1Tbs. freshly cracked black pepper, a browning sauce such as worcestershire sauce, about 2tsp., 1qt. breadcrumbs (fresh or packaged) and 3Tbs. of a good French Dijon mustard.

This recipe is great because it’s a fire and forget type of dish. You take all the ingredients (if you’re cooking for less than 20 people you can scale this formula down perfectly) and combine in a large bowl. Mix with your hands until everything is incorporated but not further. Take a 2″ hotel pan or sheet tray or loaf pan and spread your mixture in evenly, again, this is best done by hand.

Bake for 1 hour and 30 minutes at 400F or until the internal temperature holds 155F for ten seconds or longer. Let stand for 15 minutes, then slice and enjoy! Thank you so much for tuning in again this Sunday, next time on Boxing’s Sunday Brunch we will be sharing a few surprises along with the usual boxing chit chat we do so well over here, so make sure to keep it locked in to The Boxing Tribune! Remember to always brush and floss after meals and if a woman ever asks you to guess how old she is make sure to specify “How old do I think you are or how old do you look?” Sante.