It’s another budget special on ESPN2’s Friday Night Fights as Chris Avalos (21-2, 16 KOs) of Lancaster, California takes on Filipino Drian Francisco (24-1-1, 19 KOs) in a ten round junior featherweight main event of a card hosted at the Texas Station Casino in Las Vegas, Nevada. 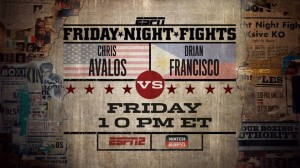 Both fighters are world ranked and looking to take that next step up in class against the true division superstars like Guillermo Rigondeaux and Nonito Donaire.

The 23-year-old Avalos (Ranked #5 by the WBO and #11 by the WBA) trains out of Robert Garcia’s gym in Oxnard, California, but works under the supervision of his father, Felipe.

Avalos has a well-balanced attack, but some have questioned his overall talent level in terms of being able to rise to that next level in the sport. Both of Avalos’ losses have come via split decision to fellow 20-something prospects (Jonathan Romero, Christopher Martin)

Francisco, 30, trains out of Fortune’s Gym in Los Angeles and is currently ranked #9 by the IBF, WBA, and WBO.

Like Avalos, the Filipino is also seen as a solid second-tier guy who may not have the natural gifts and technical skills needed to compete with the division’s elite.

Francisco is probably one step behind Avalos in speed and technique, but makes up for that with more one-punch power and proven grit when things get ugly. Although definitely a budget special, Avalos-Francisco should be a competitive, entertaining bout.