Saturday, July 13th, undefeated Edwin Rodriguez (23-0, 15 KO’s) and Denis Grachev (13-1-1, 8 KO’s) meet in the Monte Carlo Million Dollar Super 4 finale at Salle des etoiles, in Monte Carlo, Monaco. The super-middleweights will be fighting for a 60% cut of the million dollar purse and at a catch-weight of 171 ½ pounds. 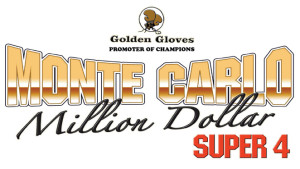 The Super 4 tournament, promoted by Golden Gloves and Monte-Carlo SBM, kicked off in March. The card was headlined by Gennady Golovkin, who blasted Nobuhiro Ishida in three rounds, and featured the semi-final bouts of the tournament which put Rodriguez up against undefeated Ezequiel Maderna and Grachev against undefeated Zsolt Erdei.

Grachev put on an impressive performance, and despite falling behind in the early rounds due to Erdei’s superior boxing ability, came back strong enough in the second half to secure a split decision win, dealing the former world cruiserweight champion his first loss in 34 bouts.

Rodriguez win wasn’t as impressive, but it served its purpose. Whether he was having an off night, or if it was just Maderna’s style that threw him off, it was an ugly fight to watch. Rodriguez’s took more shots than he should have, displayed little of his boxing ability or defense, and was docked two points in the later rounds. He managed to drop Maderna in the ninth frame, and though not the prettiest of performances, go ahead to win a comfortable unanimous decision and remain undefeated. The semi-final bouts were covered by The Boxing Tribune HERE

The Russian born Grachev, who now resides in California, came up big in April of 2012 when he came off the canvas to stop undefeated prospect Ismayl Sillakh on ESPN’s Friday Night Fights, winning the NABF light heavyweight title. He followed that bout with a 12 round loss to Lucian Bute before entering the tournament and defeating Erdei. Fighting under the moniker “Son of Drago”, he trains in Big Bear, California at the Summit Gym where he’s sparred with the likes of Gennady Golovkin and Zaurbek Baysangurov. He doesn’t possess the boxing ability of Rodriguez, but he’s an aggressive fighter who been making big improvements each time he steps up his opposition. He’s also a guy that can take a punch (or a kick); in a career that’s includes professional boxing, mixed martial arts, and kickboxing, he’s never been stopped.

Rodriguez is Lou DiBella’s rising star and a top ranked super middleweight. After a solid amateur background with a record of 84-9 and middleweight championships in 2005 and 2006, he entered the pro ranks in 2008, and went 8-0 with five knockouts in that year alone. Training under Ronnie Shields in Houston, Texas, Rodriguez has worked his way up the rankings beating the likes of James McGirt Jr., Aaron Pryor Jr., Don George, Jason Escalera, and Will Rosinsky before beating Maderna in the tournaments semi-final round; three of his last four opponents entered the fights undefeated.

The Monte-Carlo Million Dollar Super 4 finale will be televised live worldwide, and on beIN Sport USA in the United States at 3PM ET.