Zimbabwe born British Heavyweight Dereck Chisora 16-4 (10 KOs) will be looking to get his career back on track this Saturday, when he takes on undefeated American Malik Scott 35-0-1 (12 KOs), in the headline attraction on Frank Warren’s ’Behind Enemy Lines’ promotion at London’s Wembley Arena. 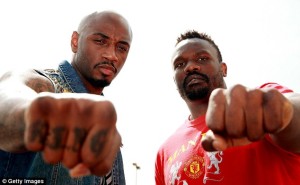 In recent years, the British Heavyweight scene, so long a field of much mirth internationally, (especially for our friends across the Atlantic!) has of late, become quite a fertile place for young heavyweights to sprout. With David Haye, Tyson Fury, David Price, and Chisora himself all operating at the same time, Britain can boast to having four world-class heavyweights of its own. Okay, we are not talking Earth shattering talents here and there must be a question over whether David Price can truly recover from his two defeats to Tony Thompson and rebuild his career. However, despite this setback, Britain can boast quite reasonably at the moment, of having a healthier heavyweight scene than American, the former home of the heavyweight.

Chisora or ’Del Boy’ as he likes to be called (in reference to the 90’s classic comedy series ’Only Fools and Horses’) can be generously described as a ’character’ out of the ring, and is well known for collecting such artifacts, like, classic London telephone boxes, and vintage double-decker buses. Yet, there has been a dark side to Chisora, which has seen him involved in a number of unedifying incidents, both in and out of the ring, which culminated last year, in his both hilarious and shocking press conference brawl, with David Haye in Germany. Like all sports, Boxing needs characters, especially in the heavyweight division, which has been crying out for some sparkle, despite the formidable poweress of the Klitscko‘s, but at the same time, it has been asked–does boxing really needs a character like Dereck Chisora?

Since regaining his boxing license earlier this year, following a short ban by the BBBC due to the Haye incident, Chisora has behaved himself, something that has been at least partly attributed to him undergoing anger management counseling. He has however been unimpressive in his only fight since regaining his license, when he laboured to a 9th round stoppage win over the limited Hector Alfredo Avila. In that fight, last April, also at Wembley, Chisora looked like a man who would rather be somewhere else. It was his first fight since being knocked out in his ’official’ fight with David Haye last July, and the manner of his performance raised the question of whether the Haye loss had taken something out of him as a fighter. Against Malik Scott, Chisora needs to show that his performance against Avila was down to lack of conditioning and motivation, rather than a more permanent form of deterioration.

In many ways these two fighters are polar opposites of each other, while Chisora is a stocky come forward, aggressive brawler, Malik is a slim, almost skinny, fast moving boxer, with a good jab. While ’Del boy’ has fought at the top level for most of his short 20 bout career, and has already fought for the world title, Malik has toiled mostly unseen in a career that began back in 2000 and has run up 36 fights, but has never come close to fighting for a world title. While Malik remains undefeated, save for a controversial draw in his last fight (which most believe he won), Chisora has lost four of his last five fights, albeit in good company.

At first glance, Maliks unbeaten record makes you think that, perhaps this is the man whom America has been looking for, since Evander Holyfield entered his pugilistic dotage. Indeed, Malik possesses some of the main attributes needed to make it as a top heavyweight; he is tall, fast moving, with a good jab. Search a little closer and the flaws start to emerge. He has no power. Twelve stoppage victories, amongst his thirty-five career wins, against mostly middling opposition, tell its own story. It is very hard for a heavyweight to go all the way, when he lacks power. Perhaps this is one of the reasons why Malik seems to have been held back during his career, for it seems curious that he is only now taking on a fighter of Chisora’s calibre, after turning professional thirteen years ago. It’s also worth mentioning that Malik has a glaring gap in his career between 2008 and early 2012, when he did not fight at all, and in fact, the Chisora fight is only his fourth since this three-year hiatus. In his last fight against the unbeaten Ukrainian Vyacheslav Glazkov, Malik seemed unlucky to be held to a draw, although he showed a good jab and movement against Glazkov, his lack of power was evident.

Dereck Chisora has always been a bit of a split personality as a fighter, impressive performances against Sam Sexton, Richard Helenius, (where he was robbed of the decision) and Vitali Klitscko, mixed in with lethargic and out of condition performances against Tyson Fury, David Haye, and Hector Avila.

Chisora’s Trainer Don Charles has said that ‘Del Boy’ is in the best shape of his career and he will most certainly need to be against Malik, as the American, despite his flaws, has the kind of elusive, jabbing style, which could give Chisora a lot of trouble, if he turns up in one of his sluggish moods. However, if Chisora comes to fight motivated and in shape, then he has just the style when on form to be a nightmare for Malik. With his lack of power, it’s unlikely Scott will be able to hold off a fired-up Chisora all night.

With Tyson Fury and David Haye meeting in a big showdown in September, the Heavyweight division is really bubbling at the moment, and the Haye vs. Fury fight will have implications on both the domestic and world heavyweight scene. Chisora needs a good win over Malik Scott in order to retain his credibility on the world scene and put himself in line for a possible big fight of his own with either Haye or Fury.

Now that top world super-bantamweight prospect Carl Frampton has been ruled out of his proposed fight on the Wembley bill, ‘Del Boy’ will have all eyes on him on Saturday, which gives him an even greater chance to shine, if he can pass his own American test.