Yesica Bopp (24-1, 11 KO’s) vs. Anastasia Toktaulova (14-11, 2 KO’s) light flyweights – Argentina
Unless you live in South America, you most likely knew nothing about this one. Bopp is the 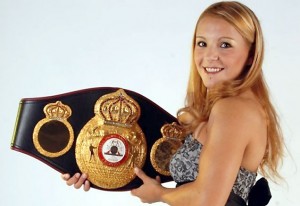 reigning WBA & WBO light flyweight champion, and one of the top female boxers worldwide. Coming off a tough decision loss (her first) to Jessica Chavez in June, she looks to get back to her winning ways and Toktaulova looks to be the perfect opponent for that. Toktaulova hasn’t fought since February of 2012 (loss to Mariana Juarez) and as you can tell by her record, has had an up and down career the whole way through. She did have short stints as the GBU and WIBF champion, but never managed to hold a belt for any length of time. With very little hitting power, she doesn’t even have a punchers chance. Fight will be televised by TYC Sports on the Boxeo de Primera program.

Chris Algieri (16-0, 7 KO’s) vs. Mike Arnaoutis (24-8-2, 11 KO’s) light welterweights – Long Island, N.Y.
Algieri is a fan favorite on the New York fight scene, and has been featured on Broadway Boxing, Box Azteca, and NBC Sports. He’s making his sixth consecutive appearance at The Paramount Theater on a card promoted by Joe DeGuardia’s Star Boxing. His last bout was an entertaining 10 round win over Jose Peralta on NBC’s Fight Night program. He has yet to hold a belt of any kind, but is looking to make a run for a world title sometime next year. His opponent, Mike Arnaoutis, is being caught at the perfect time. Arnaoutis was a rising star some years ago, but the former NABO and USBA light welterweight champion went downhill after a four fight win streak in 2008 and has amassed a record of 3-6 (1 KO) since then, becoming something of a stepping stone for other fighterss on the way up. At 33 years old, his best days are long gone, but this should still be a fun one to watch. No live television for this one, but it should come up on one of the sports networks in a few weeks.

Three of the United States’ 2012 Olympians continue their professional career building on a card at the Fantasy Springs Casino in Indio, California that will be broadcast by FOX Sports. The Olympians have been matched at a comfortable opposition level thus far and these fights are no different. The best part about this is that we’re getting to see these amateur standouts develop, for better or for worse, time will tell. Randy Caballero vs. Miguel Robles headlines the card.