Dereck ’Del Boy’ Chisora 17-4 (11kos)-4 got his career back on track on Saturday, when he ended the unbeaten record of American Malik Scott 35-1-1(12kos), at London’s Wembley Arena, but his victory was overshadowed by a controversial ending to what had been building into a absorbing contest. ‘Del Boy’seems to travel about with a cloud of controversy never far away from him, but this time he was the innocent party in the almost comedic confusion of the fights conclusion. 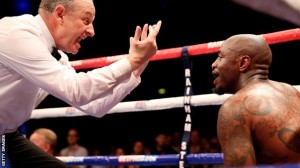 From the start the fight was turning out to be pretty much what people had expected from both men, with Chisora coming forward looking to land his swinging bombs and Scott countering on the retreat, mainly with the jab. Unfortunately, this fight had a messy quality to it throughout as both men’s styles clashed rather than gelled. There was far too much clinching and mauling on the ropes as Scott attempted to frustrate Chisora on the inside.

It was surprising to see a boxer of Scott’s evident skill and experience allowing himself to be wrestled to the ropes so often, despite the instructions between rounds of his trainer Jessie Reid, and this would prove to be Scott’s undoing in the end.

Credit must go to Chisora however for coming into this fight at his lightest weight for over two years, and from the beginning, it was evident that he was the physically stronger fighter and clearly possessed the heavier punch of the two.

The first round was close with Chisora coming forward and Scott trying to fend him off with his rather pecking jab. Both men ended up wrestling in clinches, which would break up a lot of the fights flow. Chisora landed some good body shots and missed with one of his trademark overhand rights.

In the second Scott got his jab going a little better, as Chisora missed again with flamboyant right and left swings, but found the target with some decent body shots that pleased his corner at the end of the round.

Both boxers were finding it hard to take control for any length of time as clinches and mauling were frequent and at times not broken up quickly enough by the referee.

Scott was busier in the 3rd and 4th rounds, moving around the ring a bit more and mixing in some rights with his snappy jab. Chisora was finding it hard to land cleanly, but when he did get some body shots through, they made Scott visibly uncomfortable.

Unsurprisingly, Chisora’s best moments came when Scott allowed himself to be manoeuvred into the ropes. When the action was in mid-ring Scott seemed to have control with his jab and Chisora struggled to land anything of note.

In the 5th round, Scott landed with some good uppercuts and at times seemed to be picking Chisora off with the jab. The American’s lack of power was evident; by the way, that Chisora walked through his best shots, and continued to maraud forward. At this point, despite the frequent holding and broken flow of action, the fight was finely balanced between Chisora’s strength and power and Scott’s speed and skill. Could the Philadelphian jab his way to victory or would Chisora’s superior strength and firepower wear him down in the end/

The fatal sixth round started out largely like the previous rounds, with both combatants vying for the upper hand, and Chisora coming forward with perhaps a little more urgency. The end came after Scot had been forced, yet again, onto the ropes; amid some wrestling between the two Chisora landed one of his overhand rights to the upper left side of Scott’s head. The American seemed to tumble down, rather than immediately fall, spilling down on the ropes, as Chisora landed a left to the body for good measure. Scott ended up on one knee and as the count began, smiled to his corner as if to signal that he was alright. Scott then seemed to follow the referee’s count and rose after the count of nine, but by the time he had fully regained his feet, Referee Phil Edwards was waving his arms signaling that Scott was out and the fight was over.

The abruptness of the knockdown and Scott’s rising during the count has provoked much controversy, but the blame really lies with Scott for attempting to rise after nine, which boxing history will show is always a precarious habit. Pugilistic history is strewn with the stories of fighters who lost fights when they attempted to rise at nine only to be counted out as they regained their feet. Having said that, Edwards did seem to rush from nine to out, but the fact remains, that Scott did not begin to rise until after nine was counted, and only regained his feet as Edwards waved his arms for out. Had Scott rose a second sooner, he would have been fine, that is why fighters generally try to rise after eight rather than nine. Post-fight Scott admitted that the right-hand that bundled him over, had indeed affected his equilibrium, so, he was likely more hurt, than he had looked. How the fight would have turned had Scott beaten the count is something that is open to debate.

Post-fight, a gracious in defeat Scott, declared that he would be eager for a rematch with Chisora that however seems unlikely. Despite the controversial nature of the ending and the closeness of the rounds, this doesn’t seem to be a fight, which many members of the public would relish seeing again and it is unlikely to be a match, which Chisora would want to repeat either. Now he is back to winning ways over higher level opposition, Chisora will have his eyes set upon bigger fights in the future.

Beating Scott has given Chisora the so called WBO International heavyweight title, but he will be aiming now for a further shot at the World titles held by the Klitschko’s; having already lost a previous title bid on points to Vitali, after a credible performance.

It is more likely that the near future will see Chisora feature in a big domestic match up against one of his domestic rivals, perhaps even the winner or loser of the upcoming David Haye vs. Tyson Fury fight.

Chisora remains something of a mystery, at times against Scott his work was impressive, he works well to the body and has a sound chin and underrated defense. Certainly, by today’s standards, when in top shape, Chisora is a world-class fighter. However, there are also times when Scott made Chisora look lumbering and short on ideas. Had the fight on Saturday gone on longer we would have perhaps learned a lot more about both men, but it was not to be? Malik Scott may now find himself relegated back into the ’who needs him’ club, with his somewhat awkward boxing skills, it is unlikely he will ever find opponents running to meet him within the roped square.

In the main fight, on the under card, Billy-Joe Saunders added the WBO International title to his British and Commonwealth middleweight titles, with an impressive dominating display over Gary ’Spike’ O’Sullivan. Saunders won a wide point’s decision after out-boxing the pressuring O’Sullivan at every turn, and gave further evidence as to why he is being hailed as a star of the future. At twenty-three years old, Saunders still needs to mature and build some more strength, but he already has impressive boxing skills and his flashy footwork and hand speed already indicate that he has world class potential. Saunders has his eyes on fighting WBO world middleweight champion Peter Quillin in the near future, and it is a fight, which he may well be ready for within the next twelve months.

Further fights on the under card were…

Welterweight Bradley Saunders 6-0(4kos) impressed with an exhibition of aggressive boxing which broke down Irishman Michael Kelly 8-6-1(2kos) for a 5th round stoppage. Saunders dropped Kelly in the 1st round with a left hook to the body, but the plucky Irishman survived the round and then weathered Saunders continued pressure until the 5th when the referee decided he had taken enough punishment.

Russian Middleweight Dmitry Chudinov 9-0-2(6kos) seemed unlucky to be granted merely a draw after an entertaining 8 rounder with Patrick Mendy 14-6 (1ko). Although the fight was closely contested, Chudinov seemed to have the edge through enough of the eight rounds to merit taking the decision. The two engaged in some good toe-to-toe action but the Russian had the heavier punch and repeatedly caught Mendy with his right-hand, causing the England based Gambian spent the last two rounds of the fight mainly on the defensive.

Collins Jr. has had little amateur experience and it showed at times, but there are glimpses of real talent, like his father, he seems to be very fit and strong, with an all-action style. He will certainly be interesting to watch.

Billy Morgan 9-0 was impressive against Ashley Mayall 2-2 (1ko) before being stopped in the 3rd round, due to a bad cut caused by a clash of heads in the 2nd. Morgan won the fight by a technical decision.

Middleweight Tom Baker 5-0 (1ko) was dominating in stopping Dean Walker 12-29-3(1ko)  in the second round. Baker had floored Walker just prior to the fight being stopped.