Chinese idol Zou Shiming, 1-0, takes his second bow, as a professional, this Saturday in front of his adoring fans at The Venetian Casino and Resort in Macao, China, against Jesus Ortega. However, it is the supporting bout between Juan Francisco ’El Gallo’ Estrada 24-2 (18kos) and Milan ‘Method Man’ Melindo 29-0 (12kos), for Estrada’s WBA and WBO world flyweight titles, that looks like being the fight of the night. 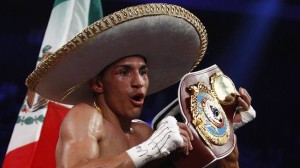 The lower weight classes of boxing are too often over looked and ignored by the general boxing public; this is unfortunate, as the fans in question, are missing out on some of the best action that can be found in boxing.

Both Estrada and Melindo are prime examples of how exciting boxing’s smallest men can be– neither has been in a bad fight, and now that they are both facing each other in the ring boxing fans can expect some genuine fistic fireworks.

Estrada won the flyweight titles with a brilliant victory over Brian Vilora in April, also in Macao, China, on the same card which saw Zou Shiming’s professional debut. ‘El Gallo’ first came to people’s notice in late 2012 when he gave Roman Gonzalez a terrific fight for Gonzalez’s WBA world light-flyweight title. Despite his youth and comparative inexperience, Estrada made Gonzalez fight all the way, before losing a point’s decision. It was a very impressive performance, against a man who is considered one of the world’s best boxers, pound for pound, by those who take notice of boxing’s lightest divisions. When he was given his chance against Viloria earlier this year, Estrada gave a brilliant performance in first, out-boxing and then out-punching, the hard-punching Viloria. Now, in facing a tough challenge from Milan Melindo, ‘El Gallo’ has a chance to show just how good a world champion he can be, if that is, he is able to hold on to his titles.

In winning the titles from Viloria ‘El Gallo,’ showed a versatility which he hadn’t before displayed. While he had mainly slugged it out with Roman Gonzalez, against Viloria, the quick handed Estrada employed some superior counter-punching in the early rounds, before then standing his ground, and out-punching ’The Hawaiian Punch’ in the later rounds of their war.

Milan Melindo has been a top contender for a while, and has mixed in world-class company since beating former world Minimum weight champion Muhammad Rachman in 2009. In this modern era of multiple ‘World titles,’ it is unusual to see a fighter such as Melindo, who is unbeaten after eight years and twenty nine contests, only now, receiving his first world title fight. Indeed, it may well be that over the past few years; Melindo has been too good for his own good. Melindo is a clever, but aggressive box-fighter, and despite his low knockout ratio, is a sharp and accurate puncher, who breaks down his opponents with a clinical precision.

After his long wait for a world title shot, it is perhaps ironic that Melindo finds himself finally getting his chance against a young champion that may be a little special.

Estrada, at only twenty-three years of age, seems to be a boxer who is getting better with every fight at the moment, and looks to have a slight but significant edge over Melindo in power and speed and overall versatility.

With both fighters having good chins, all the signs are that this title fight will be a war of attrition over 12 frenetic rounds, with perhaps a number of ebbs and flows to either side, before the night is over.

As far as the Chinese (and perhaps Bob Arum) are concerned, the main fight on this bill will be Zou Shiming’s second professional contest, which will see him taking on Jesus Ortega 3-1 (2kos). As a two time Olympic champion, with a huge ready-made fan base in China, Shiming is being groomed for stardom, but guiding him to a world’s championship in the ultra competitive flyweight division is not going to be easy, even for an old fox like Bob Arum. It goes without saying, that Shiming will be expected to beat Ortega without much trouble, and his supporters will be hoping that he shows more power and physicality in this fight than he did in his debut.

Also on the Macao card, will be an interesting tussle between Evgeny Gradovich 16-o(8kos) and Mauricio Munoz 26-3(12kos) for Gradovich’s IBF world featherweight championship. This will be Gradovich’s first defense of the title that he won from Billy Dib in March, in just his sixteenth pro contest, after coming in as a late replacement. Munoz is a typical tough Argentinean, who has previously challenged for the world bantamweight title. Gradovich is nicknamed the ’Mexican-Russian’ due to his all-action style and this fight could be lively while it lasts.