Hello team and welcome to a spicy chipotle flavored edition of Boxing’s Sunday Brunch; we are the number one weekly boxing column among the 0.001% of North Korea that has electricity. This week we’re going to talk about some of the fights and fighters from over the weekend, we’ll have random insights and musings plus a bonus culinary tip to conclude the proceedings – We are the continental breakfast of boxing articles. With that being said, I gave you your instructions the dressing room, what I say you must obey – Cuidate, escucha me, toca los manos y buena suerte…Let’s get it on! 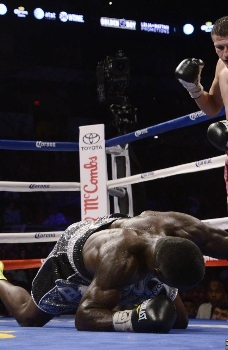 This week was absolutely rife with boxing action so let’s get right to it. From Macau, China we saw Andy Ruiz, a young heavyweight from California who is still quite raw in terms of his boxing ability and physical conditioning, however, the natural gifts of timing and power are quite strong with this one. We’ll be keeping an eye on him down the road, he’s in with Top Rank and has been on several undercards of their big fights so it’s not unreasonable to assume that he’ll be given a title shot within the next year or two.

On the same card, 32 year-old Zou Shiming from Zunui, China had his second professional fight against 19 year-old Jesus Ortega. As many already know, Shiming is being fast-tracked to a title due to his outrageous popularity within his massive country. Shiming may have already broken several World records including largest viewing audience ever for a boxing match and highest purse for any debuting (and second fight, too) fighter.

From San Antonio, Texas on Saturday night, Showtime put together one of the best cards in recent memory. From top to bottom, “Knockout Kings 2” was an absolute pleasure to witness. All three matches were bona fide slobberknockers, ultra entertaining and the card lived up to its name, with two of the three ending by way of stoppage.

In what was perhaps arguably the best and most exciting bout in an evening full of fantastic, cracking fights, Keith “One (punch at a) Time” Thurman eventually hurt then stopped the extremely underrated and very entertaining Diego Chaves. The Argentine has real power and an unorthodox style that makes for some tense and exciting moments. Thurman was eventually able to disrupt the rhythm of Chaves and get the stoppage victory he was hunting for all night.

Keith Thurman is a good young pug, he has a solid pedigree and seemingly loves to fight; it will be interesting to see how he handles the upper echelons of the welterweight ranks.Thurman passed the Chaves test but still has to prove that he belongs with the big names in the division – he’s obviously better than most of the B-level fighters, so then, when will he have the chance to step up his competition and really test himself? Dollars to pesos says this Al Haymon fighter gets the opportunity soon enough.

Although the Argentine banger lost, Chaves showed that he belongs on the main stage of big-time boxing promotions. Hopefully he won’t be relegated as just an opponent from here on in because I feel that he has a lot to offer boxing fans and I’d like to see him return to the ring again sooner rather than later.

In the co-feature, Omar Figueroa and Nihito Arakawa delivered a time capsule-esque lightweight gem. Please refer to The Boxing Tribune for a full recap of the incredible action.

I’m always interested to see an Andre Berto card. Regardless of who he is fighting or what the circumstances are, he puts his whole being into it – savvy fans understand how to appreciate a boxer like that.

Where there are tremendous upsides, often times there are flaws or negatives that can really endure a fighter to the fans. Ricky Hatton had some of those glairing deficiencies, Mike Tyson did, too.

Andre Berto has really bad defense, it’s ironic because often in the fight he utilized some decent head movement. However, when pressed, Berto stood right in front of Karass and attempted to block with his arms and gloves, slipping some but eating more than he was avoiding.  The shoulder injury he sustained was a tough, tough break – It takes an amazing amount of discipline to be able to fight through that kind of pain.

What Andre does have is an amazing chin, he and Jesus Sotto Karass both have amazing resolve and undeniable fighting spirit. I’m trying to recall the last time Andre Berto was in a bad fight. Speaking of granite wiskers, when Marcus Maidana fought Jesus in September of last year you had to wonder aloud what was holding that man up (until the stoppage); Maidana truly has frightening power. Berto has great power as well, in the post-fight press conference Jesus Sotto Karass’ face looked like he had just had a bare knuckle brawl with Andre the Giant.

This week I’m going to be showing you a surefire recipe for perfect French fries. If you make these exactly how I say and don’t like them then either you’ve done something horribly, horribly wrong or you don’t know shit about fries (YDKSAF).

To begin, fill one of your bowls with ice water. Peel and cut your potatoes into batons (Fry shapes) then submerge into the water to prevent oxidizing. After about a half of an hour, pour the starchy water out and either refill with fresh water (to hold for 48 hours maximum) or pour into a colander to drain.

Using oil that’s been heated to 280F, cook the spuds until they turn to a translucent white color, around 6 to 8 minutes. Let them rest for 15 minutes in a fryer basket or baking tray.

Now utilize the other fryer at 375F to actually fry the pre-blanched potatoes.  Judge mostly by color, the chips should be golden brown and delicious (GBD). Take your second bowl and place a towel on the bottom to help remove excess grease. Season while hot and give a couple of flips in the bowl and voila! Perfect fries.

I trust you’ve enjoyed these randomly configured words this fine Sunday afternoon. Remember to keep your head down when in the shit, don’t eat any of the “specials” and for goodness sake, don’t forget to floss. We’ll be back next week to talk more cooking tips, tricks and tactics…If some boxing talk happens to surface then so be it. Sante.