El Maromerito isn’t the clown prince his father was, his record is littered with the standard career building opponents you’d expect to find on an up and comer but after 40 fights it looks like Paez Jr. is pretty comfortable where he’s at for the moment, though he claims to have world title aspirations. Holder of the WBC International Silver light middleweight title, the most notable name on his ledger is Omar Chavez, son of Julio Cesar Chavez, whom he defeated twice. 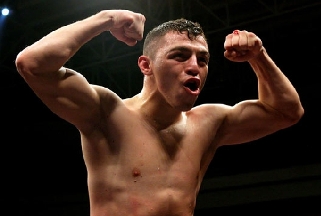 Quintanilla is your standard “stay busy” opponent. His last two bouts were six and eight round draws, a loss before that, and before that, and a decision win over a 3-0 opponent. The bout is to be broadcast by Azteca in Mexico, which means a good possibility that Azteca America will show it as well.

Halabi takes a bounce back fight after losing in January to Lucia Morelli. The loss can be forgiven though; the former world lightweight champion was out for two and a half years after her manager/step father shot her four times just moments before a world title bout. She returned in January of this year, dropping a ten round decision to Morelli for the vacant WIBF, GBU and WBF titles.

Vasarhelyi’s been a busy fighter this year: this will be her seventh bout of 2013 and though she hasn’t exactly fought the cream of the crop, at least she’s active. She’s 4-2 in 2013 including a ten round decision loss to undefeated Sabrina Giuliani for the EBU light welterweight belt. She lost a six round decision in May.

Not much else going on this week, but when you see what I’ve dug up you’ll know why these two didn’t get much press…

He’s still moving along, only not in the direction one would hope. The former world middleweight title challenger has been in the ring with plenty of top-notch opposition, but that was back in the early 2000’s when he held the EBU and Commonwealth belts. Continuing his career at 42 years old, Eastman hasn’t won a bout since 2009 and has lost six straight.

Austin holds the WBC Caribbean Boxing Federation light middleweight title, if that means anything to you. He’s 2-2 in his last four bouts, and hasn’t stopped an opponent since his third pro outing.

Ishida burst onto the scene in 2011, scoring a major upset in dramatic fashion when he stopped then-undefeated James Kirkland in the first round. The victory led to bigger things; maybe better, if you prefer a big payday to a big win. He picked up some headline fights against Paul Williams, Dmitry Pirog, and Gennady Golovkin, but lost them all. After losing three straight, he fights in his hometown for the first time since 2009, against a seemingly easy opponent.

Pangaribuan has won his last two bouts; this will be his first fight since December. Not much else to say about this guy…