Brooklyn’s Golden Child Danny Jacobs (26-1, 23 KO’s) capped off the premier of “Golden Boy Live!” in impressive fashion, knocking out Giovanni Lorenzo (32-6, 24 KO’s) in the third round of tonight’s main event at the Best Buy Theater in Manhattan. 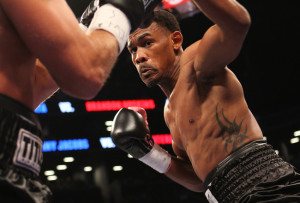 The two middleweights kept a close contest over the first two rounds, with Lorenzo making an attempt to roughen things up in the third. The strategy would work against him however, and closing in on the two-minute mark of the frame, a series of punches punctuated with a left hook-right hand combination from Jacobs dropped Lorenzo face first where referee Steve Willis waved off the bout after Lorenzo’s unsuccessful attempt to beat the count.

The knockout, which earned Jacobs the vacant WBC Continental Americas middleweight title, was his fourth since returning to the ring and his sixth consecutive win by stoppage. It was the first time that Lorenzo had been stopped in his professional career.

In the night’s co-feature attraction, Bronx native Eddie Gomez (15-0, 10 KO’s) stopped Philadelphia’s Steve Upsher Chambers (24-3-1, 6 KO’s) in the fourth round. After a nearly being stopped in the opening frame, Chambers did little the following two rounds as Gomez repeatedly tagged him from the outside. Chambers was doing better work in the fourth round until being stunned, then backed to the ropes where a series of unanswered shots from Gomez prompted referee Steve Smoger to wave off the bout.

In the telecasts opening contest, U.S. Olympian Terrell Gausha (5-0, 3 KO’s) stopped the game, but outclassed Austin Marcum (5-4, 3 KO’s) in the second round. Marcum did his best, but after being knocked down in the closing seconds of the first round, just couldn’t keep Gausha away. After damaging bodywork by Gausha, Marcum was dropped and stopped just after the one-minute mark of the second round.