First, I owe a major thank you to Tim Harrison for stepping in and taking over the Monday Rant as well as the day to day stuff here at the Tribune while I was on vacation. Guys like Tim– honest and competent non-douchebags– are hard to find in this business. Tim deserves the big señorita and tequila party I will someday throw for him. 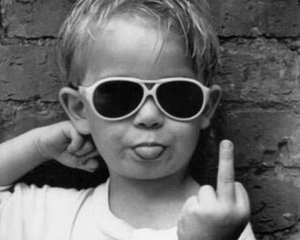 I had the misfortune of spending my last day before vacation in a Twitter tussle with the chief meat-head at MMA site, bloodytampon.com, Brent Shillhouse– one of these baseball cap-wearing chowder heads convinced that a blogger gig and a Google ranking actually makes him some sort of authority. (I’ve changed names to protect the guilty and/or retarded)

The mega-fem social media beef had to do with me mentioning my conversation with him about the puff article he wrote on Gabe Montoya’s super secret “consulting” gig for InterBox.

Anyway, I wasted way too much energy arguing with someone too dense to know that when someone is contacting you to clarify something for an article they’re writing— that clarification may actually be used in the article being written. Duh!

It was a silly fight, with him calling me a liar and a scumbag and me wondering aloud how someone could be so dumb as to not know he was being contacted by me, solely, for the purpose of publicly clarifying some things he wrote. Maybe he assumed I was with the Census Bureau? Or just curious?

But you have to see between the lines with these things.

More than anything, it was a way for this ground and pound frat boy to save face after being outwitted and made to look like the interference-running dupe he is by Montoya. Congrats Gabe on the escape, by the way. You’ve proven that nobody cares about your conflicts of interest– so, go get everything you can shove into those black slacks.

But back to the bloodytampon fella. Guys like Shillhouse are the types of guys you’ll see at Bleacher Report and Examiner.com, all geeked up on testosterone and pushed along by a painful lack of self-awareness…but these people are ultimately harmless. They are naive dipshits who think that by being everyone’s “bro,” they’ll get into the brotherhood of big-earning boxing scribes. And by the time they realize that there is no brotherhood of big-earning boxing scribes, they’ll already be three-quarters of the way through the Footlocker management training program and settling into a quiet life of expert Twitter musings.

Guys like Shillhouse are utterly insignificant in the grand scheme of things– unless, somehow, they find a way to generate a disproportionate amount of power and influence for their painfully first person “hard news.”

This was the case back when the Pacquiao Press Corps at Examiner.com was injecting all kinds of misinformation and propaganda into the already-confused mish-mosh that is boxing news.

Bob Arum, by manipulating a few hungry slimeballs who lucked on to a platform that was supremely Google-friendly at the time, was able to control the narrative surrounding his fighters and create his own story lines at will.

The Boxing Tribune was the only site to call BS on these penny click clowns like Michael Marley and Dennis Guillermo and actively fight against the misinformation.

Friends and fans of the Tribune know that we’ve been fighting the good fight for years now, trying to point out injustices wherever we find them and, very often, burning bridges along the way. But it was only when we began to take on the media that we found ourselves under attack and blacklisted by our “brothers.”

When we were going after commissioners and promoters, smaller sites and all the “indie” bloggers couldn’t link back to us quick enough. Bravo for us! Now, you’ll need a pair of nipple clamps and a cat o’ nine tails just to get them to acknowledge our existence.

This isn’t just a coincidence.

While our peers were forming secret rankings societies based around little social media cliques, we kept doing our job as members of an independent media. Increasingly, we would have to defend ourselves from efforts to discredit us– usually coming from the dirtiest of the dirty, but carried out by unwitting dupes like Brent Shillhouse.

To an extent, this tactic worked and forced us into such a position of defense that we stopped being able to move forward. And all of our allies from back when they openly admired our “free-thinking” attitude, turned their backs on us and aligned themselves with their online buddies who stroked their egos and, apparently, gave them what they wanted all along– just some token of general acceptance.

But this doesn’t mean that the Tribune has stopped moving forward completely. We broke the “pay to play” relationship between select Examiner.com boxing writers and Pacland– a story that should’ve been the boxing equivalent of the Payola rock and roll scandal in the 50’s. But, of course, it was never picked up by any other media source because, when all is said and done, the media supports the media above ethics, readers, and the sport, itself.

And when the Montoya story was brought out into the open, we were the only boxing people to write about it. Good, bad, or indifferent– No other boxing people touched the topic.

Fans, friends, and readers– The point of this Rant is to reaffirm that The Boxing Tribune is all alone. When the media is being manipulated into telling flat-out lies, we will be the only people with the guts to point out the truth. When the sport and its athletes are being adversely affected by some shady dealing, the mainstream media will only take the case so far. If toes need to be stepped on and bridges are at risk of being burnt, you can count on the media turning their backs on the story.

At the end of the day, they just don’t care enough to risk their ringside passes and their placement on imaginary advisory panels.

And for those “independent, hard-edged” writers who happen to be reading— just stop fooling yourselves. The only way to beat the Testicular Necrosis epidemic is by actually growing back your sack. If you love the sport and respect its fans and athletes, you will.

Back to boxing next week.

You can email Paul at paulmagno@theboxingtribune.com or listen to him host one of his thirty conspiracy theory podcasts. Paul is a full member of the Burger King Kids’ Club, a born iconoclast, and an ordained minister in the Universal Life Church.