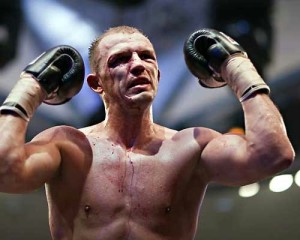 Abatangelo was a tough and durable opponent, but was simply outclassed by Braehmer, who out-boxed the Italy champion over the course of the 12 round contest. The challenger tried to rough things up in the middle rounds but had little success in his attempt to drag Braehmer into a slug-fest. Scores were 119-108 twice and 115-111 all for Braehmer, who now is set up for a possible challenge against the newly crowned WBO world light heavyweight champion, undefeated Sergey Kovalev.

The little known Shihepo was expected to be blown out quickly, but showed some solid skills, using his long jab and footwork to control most of the bout through the eighth round. Abraham fought in spurts, and was out worked early on though he did hurt Shihepo on a few occasions.

The fight got closer from the ninth round on, where Abraham stepped up his activity and was landing more often than he had earlier in the fight. Shihepo slowed a bit, but showed he was no walk over and fought back at every opportunity, keeping the fight close and never allowing Abraham to gain a solid foothold in the bout. Try as he might, Abraham just couldn’t land the one big shot he needed to put the Namibian challenger away.

To the surprise of many, and to the relief of many others, scores of 116-113, 116-112, and 117-11 were tallied in favor of Arthur Abraham. Box Nations unofficial scoring had the fight scored at 116-113 for Shihepo. The judging wasn’t completely atrocious, as many of the rounds were close, but the general feeling was that Shihepo had done enough to pull off the upset.

The victory sets up Abraham for a rubber match with WBO super middleweight champion Robert Stieglitz, who defeated him by fourth round TKO in in March.

Pulev got off to a slow start, but found his rhythm by the fourth round and took control of the bout landing the harder and more accurate punches. The 41 year old Thompson put some good work in during the seventh round, but just couldn’t keep up the pace with his younger opponent. The win makes Pulev the mandatory challenger for the IBF heavyweight title against the winner of the Wladimir Klitschko-Alexander Povetkin bout in October.