From the murder of his older brother Lenny, to his bout with Duk Koo Kim, Ray “Boom Boom” Mancini has faced unique challenges inside and outside of the boxing ring. He last fought in 1992 and is now the subject of a film directed by Jesse James Miller called “The Good Son”, which covers the close bond he shared with his father, brother and birthplace of Youngstown, Ohio. 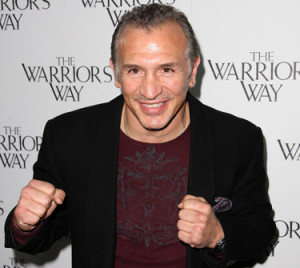 When the former Golden Gloves champion went pro he passed on an opportunity to compete for a spot on the 1980 U.S. Olympic boxing team. He doesn’t believe his fighting style would’ve been accepted in what he calls the shady world of amateur sports. The United States later withdrew from the Moscow games and Mancini gained a years’ worth of professional experience over his contemporaries.

“I had a pro style, so I wasn’t going to get to the Olympics because there’s nothing more political in this country than amateur athletics,” said Mancini. “Whether it’s the Olympics or the NCAA, which is the most corrupt organization there is. They make billions of dollars and if a kid gets a ten dollar hamburger they could lose their scholarship.”

In 1982 he captured the WBA lightweight championship. In doing so, he fulfilled a promise he made to his father Lenny that he’ll one day win the title which eluded the elder Mancini during his own boxing career.

When he defended his title against Kim he was poised to become a global superstar and fill the void left behind by the recently retired Sugar Ray Leonard. As seen in the “The Good Son”, the fight was competitive until Mancini took control in round 11. The championship rounds saw both fighters engage in violent exchanges before a combination knocked Kim down in the 14th, leading referee Richard Green to stop the fight.

After the bout, while in his locker room Mancini learned that Kim was in dire condition. The Korean warrior suffered a brain hemorrhage and died four days later.

After Kim’s death, Mancini went from being the next big thing to receiving heavy backlash from the American public. In contrast, the people of South Korea and Kim’s very own fiancé understood circumstances and held no ill will toward Mancini. He looks at this as a flaw in American culture and believes it’s a problem we still face today.

“Well that’s the American way isn’t it? And it’s unfortunate. We build our idols up to tear them down,” said Mancini. “You see it now with this baseball [steroid scandal] stuff going on. I mean it’s ridiculous, they ruin these guys’ reputations, they ruin their credibility and they ruin their legacy. That’s America.”

Many feel it comes with the territory of being a celebrity. An experience that according to Mancini can be handled better with the right attitude.

“As somebody in the public eye you have to understand what it is,” said the pride of Youngstown. “Irving Rudd (legendary Top Rank press agent) used to say to me, young man, always remember you’re like the monkey that climbed the flag pole, the higher you go, the more your ass is exposed. If you’re going to be a jerk, you give them all of the ammunition they need.”

The public scrutiny he faced combined with a boxing style which had him exposed to as much punches as he dished out, caused Mancini to walk away from the sport in 1985, at the age of 24. He would return to fight two more times before hanging his gloves up for good, a decision that some fans questioned.

“The old timers said get in make your money and get out. So I did, and when I retired they said what the hell is the matter with you? You retired too young,” said Mancini while laughing. “I have no regrets because nobody leaves the boxing game unscathed. It’s just how much do you have left when you get out. I always knew that being a fighter was a chapter in my life, it wasn’t going to be my life.”

When he retired he moved to L.A. and became an actor. He has T.V. credits like “Who’s The Boss?” and has starred in feature films such as “Turn Of Faith” and “RedBelt”. But he’s never forgotten his roots. When he speaks about Youngstown his voice gets louder and his words can’t seem to come out fast enough. Only god and his family mean more to him than his hometown.

It’s no secret that Middle America has struggled during the current economic climate. The “Good Son” chronicles the difficulties his city dealt with after the Steel Mills shut down in 1977. But with restaurants, nightclubs and the opening of the Covelli Centre, the former champ believes his city is on the rise and wants to be apart of it.

“I love my town, it will always be a part of me. From the womb to the tomb baby,” Mancini said. “The thing about Youngstown is that we’re going to always survive. Now it’s actually doing very well, because a lot of small companies are coming in. 10 years ago you could’ve shot a cannon ball through downtown and not hit anybody. It’s an exciting time.”

However, there is one aspect of Youngstown that he isn’t so enthusiastic to speak about. Former middleweight champion Kelly Pavlik.

Pavlik put the city back on the map after he knocked out Jermain Taylor in 2007 to capture the 160 pound title. Since then, he lost to Bernard Hopkins and Sergio Martinez and has struggled with alcohol abuse. After winning four consecutive fights he unceremoniously retired earlier this year.

“I used to be one of his biggest supporters,” Mancini said.  “Now I’m like don’t ask me about him because I have nothing good to say. It’s unfortunate, he was in a prime position to not only be the face of American boxing, but the face of boxing worldwide. He couldn’t respect the sport or himself enough.”

Another Ohio native in the spotlight is welterweight champion Adrien Broner. “Boom Boom” has mixed feelings about the 23-year-old star from Cincinnati.

“I wasn’t a fan of his to be honest, but I met him and he showed me a lot of respect,” Mancini said. “And my father taught me along time ago, all you can go by is how a guy treats you personally. He was a good guy to me and very respectful, so I appreciate that.”

But some of Broner’s antics have clearly rubbed the legend the wrong way and he takes exception to the lack of originality in boxing today.

“Look there’s no doubt the kid can fight, but he’s becoming Mayweather light. Meaning there’s nothing original about him, the act is old,” said Mancini. “The stuff he’s doing with the social media. I have to see him sitting on a toilet taking a shit (referring to a photo Broner posted on his twitter page), that supposed to be someone to look up to and respect. He’s a young kid, but that’s no excuse for stupidity.”

Next week, exclusively on TheBoxingTribune.com, Ray “Boom Boom” Mancini discusses Mayweather-Canelo and Garcia-Matthysse, as well as the lack of toughness in American sports today and whether or not a fighter in today’s era of 12 round title fights could be considered the greatest of all time.