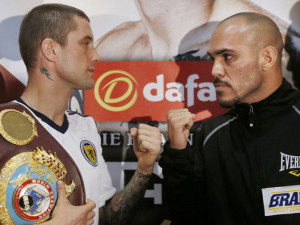 Burns has a nice streak going for him: after dropping a 12 round decision to Carl Johanneson back in 2007, he’s racked up 21 straight victories. Along the way he’s picked up the Commonwealth (British Empire) super featherweight title, which he held until 2009 before moving on to grab his first world title, snagging the WBO super featherweight belt from undefeated champion Roman Martinez the following year.

In 2011 the Coatbridge native moved up in weight and won his second world title, defeating Michael Katsidis for the interim WBO lightweight strap, and then gained ownership of the “full” title by defeating Paulus Moses four months later. He made relatively short work of Kevin Mitchell, stopping him in four rounds before meeting up with his toughest challenge, a near defeat at the hands of Jose A. Gonzalez this past May.

The undefeated Gonzalez was both stronger and faster than Burns, and the champ was out boxed over the course of nine rounds before Gonzalez quit on his stool, citing a wrist injury. It was a stroke of luck for Burns, who was behind on all three scorecards and likely on his way to losing his title.

Well known as Manny Pacquiao’s chief sparring partner, Raymundo Beltran is a two division regional titlist, most recently holding the NABF lightweight belt in 2012. The 15 year professional is fortunate to have this opportunity, after having those hopes nearly squashed losing two close outings to undefeated fighters in Sharif Bogere and Luis Ramos Jr. in 2011 and 2012 respectively.

In the nine months following the Ramos defeat, he fought his way back to contention with three 10 round victories on national television. A close win over Hank Lundy on ESPN was followed five months later by another ESPN appearance, a more convincing decision over Ji-Hoon Kim. In April, Beltran took a one sided decision over Alejandro Rodriguez.

Both fighters need a strong performance tomorrow night. Burns needs to do something impressive to negate the sub-par display he put on against Gonzalez, a performance that gained him some doubts about his true ability. He’s determined not to make the same mistakes that hurt him in the Gonzalez fight, though that can depend what type of fight Beltran brings with him. He also needs to stay focused on the task at hand, as there’s already been talk of bringing him to the States to meet up with Terrence Crawford, though at the moment it’s nothing more than just talk. For Beltran, he knows this may be his one and only shot at a world strap and he plans to make the most of it. He’s focusing on the best of Ricky Burns, not just the version he saw in May, and is determined not to let the tough path he’s travelled be for naught.

Beltran’s a capable opponent and he could give Burns some trouble early on, but if the world champion comes in as focused as he says he’ll be, it’s hard to see Beltran scoring an upset in Burn’s home country and a knockout for either fighter is unlikely. The challenger will keep things tight over the opening half, but look for Burns to establish to fights pace in the middle rounds and work his way to a unanimous decision win.