There was a lot of trash talk in the fight’s build up, but when all was said and done, it was Chris “The Nightmare” Arreola (36-3, 31 KO’s) who talked the talk and walked the walk, blowing out Seth “Mayhem” Mitchell (26-2-1, 19 KO’s) in the first round of tonight’s main event at the Fantasy Springs Casino in Indio, California. 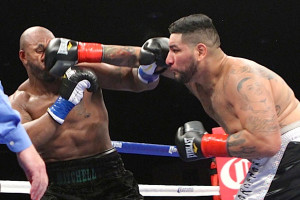 Just one minute into the fight, a straight right from Arreola had Mitchell badly staggered, and less than a minute later a series of right hands had Mitchell on the canvas. Beating the count, but only to endure further punishment, the bout was finally waved off by referee Jack Reiss at the 2:26 mark after another series of unanswered shots from “The Nightmare” sent Mitchell staggering into the ropes.

The victory earned Arreola the WBC International heavyweight title, but he cares little for that belt, as it’s the world heavyweight title he’s after. A rematch with Bermane Stiverne, who defeated in April, is also on his mind.

This was Seth Mitchell’s second loss in his last three outings; last November he was stopped in two rounds by Jonathan Banks.

In the Showtime-televised opening bout, fringe contender Efrain Esquivias (17-2-1, 10 KOs) put, perhaps, the last nail in the professional coffin of the 38-year-old Rafael Marquez (41-9, 37 KOs) by stopping the two-division world champ in the ninth round of a scheduled ten round featherweight contest.

A dead-legged Marquez was game to go toe-to-toe with the much fresher 30-year-old Esquivias, but his body simply wasn’t up to the task. The veteran battler began wilting under Esquivias’ pressure in the middle rounds and, except for the occasional burst of short-lived energy, seemed on his way to a punishing loss.

Marquez, who had just signed a 4-fight deal with Golden Boy Promotions, was put on the canvas in the ninth round, but managed to beat the count. However, with no strength left in two weary legs and no energy left in a tired body, there was no point in continuing. Referee Raul Caiz Jr. agreed with that assessment and officially waved the bout off.

After the contest, Esquivias praised his hero, Marquez, and called out current WBC junior featherweight champ, Leo Santa Cruz. Marquez, during his time at the mic, congratulated Esquivias, but was noncommittal about a decision to retire.