This one’s going to make the pay-per-view worth it’s price. Danny Garcia is one of those guys that always finds a way to win; he’s a tough fighter that can take a good shot and carries enough power to turn a fight around with one punch, especially his left hook. Where the danger lies for him though, is that at times he takes quite a few shots to score his own, and with a puncher like Matthysse, that can end his night early. Matthysse has been scoring high profile knockouts that have some forgetting that he’s actually a well rounded fighter and more than just a puncher. Garcia can’t avoid Matthysse for 12 rounds, nor can he take the kind of punishment “The Machine” will dish out for the length of the fight. It’ll be a give-and-take battle early on, but Matthysse will break Garcia down and score a middle round stoppage. 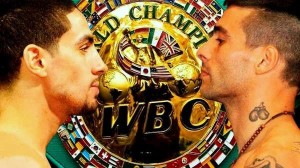 For all the awe-inspiring carnage generated by Lucas Matthysse, there’s always a way to shut down an offensive machine. Unfortunately for fans of Danny Garcia, the WBA/WBC junior welterweight champ is not a slick boxer or an exceptionally smart ring tactician. Garcia is a battler with slightly above average skill whose first instinct is to fight back when buzzed hurt. Against Matthysse, that instinct will lead him to the end of his title reign via third or fourth round TKO.

This could well be the fight of the night. Garcia can win this if he uses his boxing rather than electing to brawl with Matthysse. If Garcia can get past the first five rounds, and get his jab going, while keeping Matthysse’s respect with his right hand, I see him winning a narrow points decision.

Lucas Matthysse over Danny Garcia by 10 round TKO. There’s nothing on Garcia’s resume that tells me he will be able crack Matthysse’s granite chin. Yes he’s hurt Amir Khan, Zab Judah and Eric Morales, but that isn’t exactly boxings Mount Rushmore of durability. I don’t see Angel Garcia allowing his son to take too much punishment here. They will wave the white towel and live to see another day.

As shown in fights against Zab Judah, Lucas Matthysse can be outboxed by better boxers. Danny Garcia is not a Judah/Alexander-caliber boxer. His strengths are his left hook, his timing and ability to break his opponents down systematically and quickly. Matthysse’s timing will rival Garcia’s, and he’ll have a big edge in power with both hands. Lucas will end Garcia’s title reign inside of 5 rounds. Matthysse KO5.