There’s not much to say here, because Mayweather wins this one with little trouble. Besides his training and conditioning, his ability to adapt and evolve with each fight is what’s kept him at the top of his game this long. Alvarez will do well early, but Mayweather will have him figured out by the third or fourth round and once he settles in, it will be another display of pure boxing skill and defensive genius from the pound for pound great. Everyone’s wondering when father time will show up for Mayweather, but it won’t be Saturday night. Canelo wins three, maybe four rounds tops and Mayweather wins via unanimous decision. 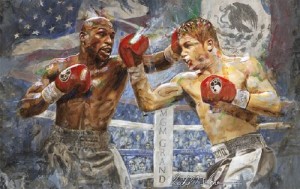 Assuming all things play out true to form and nothing shady happens in Vegas, Mayweather should take a solid unanimous decision. Alvarez is no bum and no product of pure hype. He’s a solid, developing fighter who adds something new in each fight and, by all accounts, is phenomenally well-focused and receptive to being taught…Is he ready for Mayweather? Hell, no…But who is? If Canelo can do enough to keep it close on pure aggression, he might get a helping hand from at least two of the judges, but all of this really depends on Mayweather. Floyd can turn on the gas and blow Alvarez off the road if he so chooses, but if he picks and paws, just content to do enough to win, he could be in for a very big surprise. Officially, I say Mayweather via UD…but keep an eye out for some possible sleight of hand.

I think Alvarez will pressure Mayweather and try to pin him on the ropes where he will unload. Mayweather will be blocking and dodging most of the punches but if his own offense is not active enough then I can see Alvarez winning a contentious decision due to his aggression and enormous fanbase. Floyd will need to really dominate this fight to win on points, ideally he needs a Hatton fight like stoppage to win.

Saul “Canelo” Alvarez over Floyd Mayweather by split decision. After his fights with De La Hoya and Cotto all everyone seemed to say was “imagine if Floyd fought them in their prime” well here you have it, Canelo’s jab is just as good as both. I see Canelo trapping Floyd up against the ropes and attacking his body, getting points where he can. He’ll look better than Cotto did and he’ll get the rounds Cotto didn’t.

It probably won’t take Mayweather long to solve the puzzle Canelo will present him with – maybe 3 rounds. And despite reports of Canelo sending sparring partners running for the hills, the kid may be weight drained and he has a habit of fighting in spurts, making it harder to steal rounds. Mayweather will win the fight, but the scores will be muddier than need be. Mayweather SD12