With the huge Mayweather-Alvarez pay-per-view this weekend,”The ONE”, everything else is under the radar. 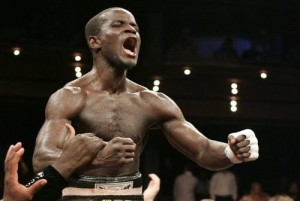 Golden Boy Promotions kicks off the big fight weekend Thursday night with a televised card at the MGM Grand Conference Center in Las Vegas. By the time you read this, the show will have already taken place.

Shawn Porter (22-0-1, 14 KO’s) vs. Julio Diaz (40-9-1, 29 KO’s)
A rematch of their December draw, up and comer Porter looks to keep his unbeaten streak alive against experienced veteran Diaz, the winner becoming the NABO and USBA welterweight title holder.
Porter won via 10 round decision

Badou Jack (15-0-1, 10 KO’s) vs. Marco Antonio Periban (20-1-1, 13 KO’s)
Undefeated Jack looks to pick up his first belt, and snag the NABF super middleweight title from Periban, who’s coming off his first loss to Sakio Bika in June where he contested for the WBC world title.
Jack and Periban fought to 10 round majority draw

Hughie Fury (8-0, 5 KO’s) vs. Shane McPhilbin (8-7-1, 5 KO’s) – Yorkshire, U.K.
The brother of Irish heavyweight champ Tyson Fury continues to build his career against prospect-turned-stepping stone McPhilbin, who briefly held the BBBofC cruiserweight belt but after holding a record of 8-2, lost five bouts and drew in one since 2012.

Chris Eubank Jr. (10-0, 5 KO’s) vs. TBA – Yorkshire, U.K.
The son of the former super middleweight world champ is scheduled to fight on the card…against who remains to be seen.

Joshua Clottey (36-4, 22 KO’s) vs. Dashon Johnson (14-12-3, 5 KO’s) – Huntington, N.Y.
In a pro career spanning nearly 20 years, Clottey has fought plenty of top names. The former IBF welterweight champion was unsuccessful in his last two big outings, dropping fights to Miguel Cotto and Manny Pacquiao. He stopped Calvin Green in November of 2011 but has been inactive since. Johnson should serve up little risk, since 2012 he’s gone 1-8.

Chris Algieri (17-0, 7 KO’s) vs. Wilfredo Acuna (14-12, 11 KO’s) – Huntington, N.Y.
The “Pride of Huntington”, Algieri puts his undefeated record on the line, fighting for the seventh straight time at the Paramount Theater, against Wilfredo Acuna. Acuna may have a punchers chance, but he’s lost his last five and hasn’t fought in a year.