Many had wondered whether this was to be the night when the torch of the world’s number one fighter, pound for pound, was to be passed; whether by fair means or foul, from Floyd May weather (45-0, 26kos), to Saul ’Canelo’ Alvarez (42-1-1, 30kos). 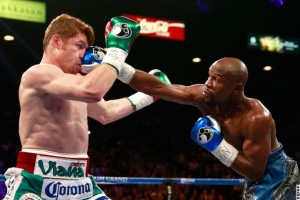 Alvarez told us that this was his time. Oscar De La Hoya told us this was Alvarez’s time (and that he had given ’Canelo’ the blueprint with which to beat Mayweather). Floyd was fighting someone far younger and stronger than him, who already had a fan base to rival his own. Some begun to think of it as fate, that Floyd was about to lose his crown. Fate, and a little bit more perhaps, as the biggest powerbrokers in boxing were rumoured to be rubbing their hands at the prospect of Saul Alvarez unseating ’Money Mayweather’ from atop of the boxing world. Saul with his 40,000 ready-made Mexican fans. It was meant to be… it seemed.

However, we shouldn’t have worried. Floyd Mayweather last night showed the meaning behind the saying ’skills pay the bills’ when he treated the record breaking audience and Saul ’Canelo’ Alvarez to a boxing master class, and unified the WBC and WBA World light-middleweight titles in the process.

Yet, this was not Mayweather simply laying on the ropes and being content to counter himself to victory as he did against Gurrerro earlier this year. Against Alvarez, Mayweather was at his most positive and aggressive since the Ricky Hatton fight, perhaps aware that he needed to win rounds clearly and decisively against the popular challenger in front of him.

Floyd was on the front foot from the start, scoring with his jab early, as Alvarez, usually known for his aggression, boxed on the retreat, and looked to counter.

As the fight unfolded, it became clear that Alvarez was attempting to beat Mayweather by using Oscar De La Hoya’s self-proclaimed ‘blueprint’ for beating ‘Pretty Boy’. Oscar’s belief is that the key to victory over Mayweather is to out-jab him on the outside, with jabs to the head and body, and then smother Floyd’s famed counters with combinations.

This is obviously no easy task, and the small fact that De La Hoya was himself well- beaten by Mayweather in their showdown in 2007 (despite the fight going to a split decision!,) isn’t exactly a glowing reference for his ‘blueprint’.

As it is, Alvarez has a good jab himself, but he was never going to beat Mayweather on a jab-based strategy. This was Mayweather’s show from beginning to end, as he dominated with his own sharp jabs, which landed with increasing regularity, and potency as the fight progressed. Alvarez‘s jabs were mostly taken on Mayweather’s gloves, or shoulder, or avoided altogether. With Floyd’s replies lightning fast and accurate. Mixing his jabs with potent-looking right hooks, and later in the fight, some beautiful uppercuts. Alvarez kept his guard high and tight, and at times it was only this that saved him from being completely overwhelmed by the quicksilver boxing artist in front of him.

Floyd made good use of the ring, with the nimble footwork of a boxer ten years younger. Indeed, by the end of this fight, it would be the 23-year-old Alvarez, rather than the 36-year-old Mayweather, who would be looking heavy legged.

Yet, despite using good movement, Mayweather spent long periods stood in front of Alvarez, like a teacher taunting a pupil, as he dodged or Alvarez’s punches, then landed his own replies. On the few occasions that the Mexican did land a solid shot or two, Mayweather would fire back with added spite in his shots.
Mayweather is often cited as not having a ’punch,’ but along with his speed of hand, he has enough power in his punches to dissuade his opponents from simply attempting to walk through his shots in their efforts to beat him.

The difference in physical size between the pair was clear to see, but size and strength, even when allied with good technique, is no match for the mixture of speed and skills that Mayweather brings to every fight. At times, it looked as if Floyd could have stopped Alvarez if he had really tried, but whether it is out of concern for his hands, or a simple apathy to gaining stoppages, Floyd seemed happy to let this go the distance.

Floyd’s performance was artistic in its execution, at 36, it seems hard to pick any visible sign of decay or decline in his fighting makeup. Indeed, it could be said that Floyd is still at his physical peak and reunited now with his father, is a better boxer than ever.

Yes, we worried about something strange happening on this night, and there was a little scare when the judge’s scorecards were read out, and a certain C.J Ross saw the fight as 114-114; a draw. Luckily, the other judges saw it 117-111 and 116-112, but one has to wonder, what might have happened if Floyd had not have taken such a proactive role in this fight, and fought with an unusual aggression for him. Clearly, he had felt the need to display his dominance throughout this fight, and not trust the judges to give him close rounds.

There will be excuses now, with some citing that Alvarez was too inexperienced, too young, or just simply not good enough, but the fact remains that Mayweather took on a fighter picked by many to be the next star of boxing, and schooled him with a lesson in boxing at its sweetest. As for anyone who may cite the ’catch-weight’ aspect of this fight having any bearing on the result, Alvarez outweighed Mayweather on the night by 15 pounds, if we are to have truly ’fair’ fights with no catch weights, then let us have fighters weighing the same on fight-night, not 24 hours before fight night. After all this is why weight divisions were introduced in the first place.

People will debate how Mayweather stands in boxing history, in comparison to boxing immortals, such as Sugar Ray Robinson, Henry Armstrong, Sugar Ray Leonard, Roberto Duran. But, few would convincingly dispute that Mayweather is the outstanding boxer of his generation, and that within the general scope of his fighting weight, there seems no one capable of beating him, including Manny Pacquiao.

Prior to the Mayweather performance, the crowd were treated to an exciting clash between Danny Garcia (27-0, 16kos) and Lucas Matthysse (34-3, 32kos), in a unification battle for the fighter’s WBA and WBC world light-welterweight titles. The big hitting Matthysse entered the ring as a huge favourite, not only to win, but also to win early with one of his thunderous punches. However, from the start, Garcia showed the ring skill which many did not believe he possessed. He worked off the jab, while pot-shotting with the right hand. Matthysse came forward constantly, but in echoes of Floyd Mayweather’s later performance, Garcia either dodged or blocked most of the shots, and showed a sturdy chin to take the one, which got through without flinching.

The early rounds were close with Matthysse showing the more power, but Garcia edging the rounds with his superior boxing skill, and punch variety. Too often Matthysse seemed to be waiting to land the knockout punch, which had made him such a favourite to win this fight. Again, this contest was to be a case of ’skills paying the bills’.

Skills along with a healthy dose of durability and a decent right hand too.

By the middle rounds, Garcia’s jab had closed Matthysse’s right eye, and he had gained a dominant hold on the fight. With Matthysse having trouble seeing on the right side, Garcia opened up even more, with heavy right hands and left hooks, but Matthysse continued to come forward, almost blindly, and land some good shots to Garcia’s body.

It was perhaps this body attack that was behind Garcia fading in the 10th round, when he was hurt badly for the first time in the fight and it looked at if Matthysse might be able to gain the stoppage, that he seemingly now needed in order to gain victory.

Garcia once again showed his fighting heart by coming back in the 11th round to floor Matthysse for the first time in his career, with a combination to the head and body. The knockdown regained Garcia’s hold on the fight, and even though he lost a point in the last round for a low blow, his victory was already sealed by then.

The fight ended with a flourish, as both men went toe to toe, for the final 30 seconds.

With this victory, Garcia has shown that he is more than just a durable slugger from Philadelphia who can box a bit. He is a genuine champion, who has established himself as the number one fighter at light welterweight, and at age 26, seems to be still improving.

He may now also find himself offered a shot at Floyd Mayweather himself.