The boxing’s media is filled with desperate, middle-aged “experts” with swamp ass and eternally sour shoes and young, wannabe hipsters; both scurrying to ask everyone the same question over and over, convinced that they are rock stars because they were able to hustle a press pass and get close enough to stick a microphone in someone’s face. Their only total and 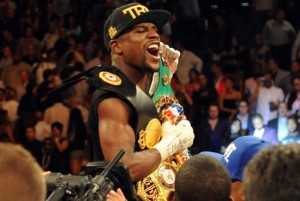 complete success is in perpetually missing the heart and soul of a sport built entirely on heart and soul. Led by personal agendas and/or hand-fed publicist propaganda, they tell whatever story best suits their own bottom line.

But there was a change in the air for this particular PPV mega-card. Where once Mayweather was the scourge of the self-righteous boxing scribe, we saw little but flat-out shilling for the fighter and the fight this time. Entire major websites looked like Showtime “The One” landing pages, only missing a convenient “Order Here” link to solidify the sales process.

Anything even remotely critical about Mayweather or this event was buried by the mainstream boxing media in favor of non-stop sales pitches disguised as news stories, used to hype the event and sell each fighter’s respective image.

If website traffic responded favorably to this all-sunshine and sales pitch approach, we may be seeing the beginning of the era of full-on boxing infomercials prior to these major cards.

On Saturday night at the MGM Grand in Las Vegas, boxing fans saw their sport’s own version of the money shot as Floyd Mayweather stepped on the main stage to give the young upstart, Saul “Canelo” Alvarez, a lesson in advanced placement ring geometry.

Mayweather is truly something special. A one-man orchestra in a land of casual guitar strummers, the layer upon layer of excellence in his game is a treat for hardcore boxing fans and an utter frustration for those eager to see him fall. The outside-the-ring drama and “Money” persona manage to draw people to the show, but what they end up getting is less of a fight and more of a virtuoso performance. It’s like clicking on a link to a World Star Hip-Hop video and getting sent to a masterful John Coltrane jazz sax solo.

However, complete mastery is an acquired taste, especially in this era of street fight videos and flailing, UFC-style brawls. But those who actually appreciate the sport of boxing will appreciate Mayweather and what he can do better than anyone else.

Against Canelo, Mayweather seemed especially sharp and motivated. This was no pick, paw, and move performance. This was not Mayweather on autopilot. Fans got the entire Mayweather Show on Saturday and if the end result was anything less than scintillating, don’t blame Mayweather. Instead, blame a sport that lacks the ability to produce fighters with the same level of tireless dedication to skill and mastery as Mayweather.

This next fight will be a hard sell for Team Mayweather. It doesn’t matter who the next opponent will be. After Saturday night, how the hell will consumers be convinced that anyone has a real chance of beating him?

There are two realities when it comes to Saul Alvarez and his performance last Saturday night: 1. He was sorely outclassed by a much better boxer and 2. What he tried in vain to execute against Mayweather would’ve likely brought him victory against anybody else in his division.

The 23-year-old Alvarez leaves Las Vegas just as he entered: a good young fighter with a good head on his shoulders and a solid future ahead of him.

Media “experts” are always on the lookout for “hype jobs” — it’s the easiest way to look informed and trendy-critical. And Alvarez was a target from day one.

When he was as young as nineteen, the media hipsters were characterizing him as nothing more than a flat-footed no-talent capturing headlines solely due to his red hair and freckles. As Canelo developed as a fighter, the criticism followed. Right up until the Mayweather fight, there was still a pocket of boxing intelligentsia determined to overlook his obvious development and still paint him as a talentless crumb-bum media creation. A well-written, but poorly-informed story in Grantland even tried to make the case that Canelo really wasn’t all that popular in Mexico.

Yes, Alvarez has found himself in the odd position of being the extension of Oscar De la Hoya’s bloated ego and, yes, the media has worked to tell his story. But none of that is Alvarez’s fault– and it shouldn’t be his burden.

Canelo will move on, likely winning another world title by the end of next year, and he will be all the better for having been tutored by Mayweather. And the Mexican fans, who love stories of defeat and redemption, will love him more than ever.

You can email Paul at paulmagno@theboxingtribune.com or just form your own rankings panel and name him no.1 contender to a forever-vacant world champ. Paul is a full member of the Burger King Kids’ Club, a born iconoclast, and an ordained minister in the Universal Life Church.