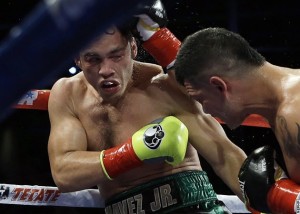 figures and events.  We are the most educational, informative and important boxing column that you will ever read at this particular moment. Hold on to your Bimbo™ brand Conchas and grab an ice cold Modelo, because we’re about to begin. With that being said, I gave you your instructions in the dressing room, what I say you must obey – Cuidate, escucha me, toca los manos y buena suerte…Let’s get it on!

This weekend we saw some of the bigger names in the light heavyweight division put their respective records on the table and fight it out for supremacy. One of those light heavyweights is actually a middleweight who has discipline problems. The former middleweight champion, Julio Cesar Chavez Junior is being coddled by some of the more influential figures in the game. In boxing, blood lines are sometimes more important than blood, sweat and tears.

[For a full recap of the action, please refer to TheBoxingTribune for the best coverage in the business]

Brian Vera fought admirably against a much larger man, he may have even done enough to win and in the minds of many, he did. In fact, most feel that the Texan, Vera had been robbed of his victory over Chavez Junior this past Saturday night. Logic would argue that those individuals have a strong case. Somehow, Mexico’s favorite son-of-a-legend once again gets the benefit of the doubt and receives a wide points victory.

Chavez is one of the few boxers who can continue to get away with what is perceived as disrespectful behavior towards the sport. Failing drug tests, unsuccessfully making weight (even when it is a drastically inflated number) and showing an overall lack of seriousness for his craft makes Chavez hard to get behind…though, his in-between fight weight does not.

27 year-old Julio Cesar Chavez is a massive middleweight, however, his problem is that on Saturday night he basically fought at the light heavyweight limit (Chavez weighed 172 ½ … nearly 13 pounds heavier than when he fought Sergio Martinez almost one year ago to the date), now can you imagine the absolute beating that young Chavez would receive had he fought a real light heavyweight like the WBC champion, Adonis Stevenson?

“Superman” Stevenson, has earned his moniker with a class A performance against the now apparently quite limited-but-still-dangerous Tallahassee, Florida native, and former IBF champ, Tavoris “Thunder” Cloud. Now at 36 years-old, Adonis Stevenson, a late bloomer, is seemingly on top of the light heavyweight crop. A quick peek at Stevenson’s resume doesn’t lead one to believe that he’s fought a succession of killers, but his fluid skills in the ring cannot be denied.

Tavoris Cloud is himself an interesting study. In one instance you have a shredded, beast of a man and on the other hand there is this sense that any kind of lateral movement and he is completely clueless – kind of like how a T-Rex can’t see you if you stand totally still. Unfortunately, Thunder Cloud may already be showing signs of decline. While he looks to be in immaculate condition physically, perhaps mentally he isn’t as strong as he once was.

This marks the second official loss that Tavoris Cloud has registered inside of two years. Some would say that when Cloud faced off against Spaniard, Gabriel Campillo in Texas early in 2012, he was dramatically out-classed, however, the Don King fighter was somehow awarded the win from the likely corrupt and definitely inept judges.

Thanks for joining us again this week team, we will be back next Sunday with another bunch of randomly assembled catch phrases, one-liners and incomplete sentences. On Saturday, October 5th, yours truly will be covering the Miguel Cotto versus Delvin Rodriguez clash in Orlando, Florida. Keep it locked to The Boxing Tribune for full coverage of the event. Until next time, Sante.