Headlining the Solo Boxeo Tecate card, the undefeated welterweight prospect has been in with some solid, experienced veterans. Vargas has beaten the likes of Vivian Harris, Lanardo Tyner, Josesito Lopez, Steve Forbes and most recently beat undefeated Wale Omotoso to win the WBC Continental Americas welterweight title. The hard-hitting Narh was inactive in 2012 and returned in 2013 to tally a 1-1 record for the year, losing his last bout to Ray Robinson in August.

Also on the “Solo” card is undefeated NABO Youth super bantamweight champ, Jessie Magdaleno, who’s been a busy fighter since turning pro in 2010. He’s fought 6 times each in 2011 and 2012 and is in his fourth fight of the year against Hidalgo. Hidalgo’s edged out Magdaleno fight-wise; he also turned pro in 2010, fighting seven times, followed by nine bouts in 2011, six in 2012, and has already fought six times this year. The majority of his losses have come when he steps up his level of opposition. The most notable name on his record is Japan’s Daiki Kameda, who knocked him out in one round in 2011. 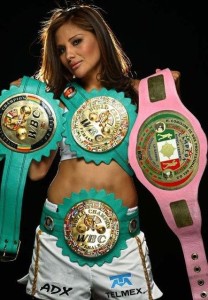 “La Barbie” defends the WBC International super flyweight title she regained from Riyo Togo in July. Prior to that bout, Togo was found to have padding removed from her gloves, which brought into question her first round stoppage of Juarez just three months earlier. In any case, the former world champion evened the score and looks to set her self up for another world title shot. OnesongchaiGym is far less experienced, and the WBC Asian Council flyweight titleholder is also making her first trip outside Thailand.

Former world champ Harris is still at it, but in recent years he’s become more of a stepping-stone for up and coming talent. He won his last outing against Shakha Moore in March but prior to that he had went 0-6-1 against welterweight prospects. O’Connor’s lone defeat came against then undefeated Gabriel Bracero in 2011. He’s won nine straight since, not against anyone special but he has been active, fighting four times so far this year.