Now that the boxing world is finished obsessing over the record numbers produced by Floyd Mayweather and Canelo Alvarez, it can move on to fights that are more likely to be explosive. One of these encounters is a match up between WBO middleweight champion Peter “Kid Chocolate” Quillin (29-0, 21 KOs) and Philadelphia’s “King” Gabriel Rosado (21-6, 13 KOs), who meet at Boardwalk Hall in Atlantic City on October 26. 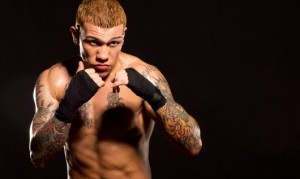 Rosado last fought in May and lost a controversial decision to Mayweather protégé J’leon Love (15-0, 8 KOs). After Love tested positive for a banned substance the decision was overturned and the fight was deemed a no-contest. Rosado doesn’t plan on leaving his fate in the judge’s hands against Quillin.

“I’m going to win by knockout,” said Rosado. “I’m training for a knockout. Me and my coach are game planning to knock kid out. We’re not going to take this to the scorecards.”

With his mentor Bernard Hopkins (53-6, 32 KOs) headlining the card at a venue that’s just a short drive from Philly, look for Team Rosado to be heavily represented at Boardwalk Hall. Rosado believes those who turn out will not be disappointed by his performance.

“You’re going to see the best of me,” said the 27-year-old. “Even the people who got me winning the fight are going to be surprised by my performance. This is the best shape I’ve been in. I’ve always been confident, but the confidence I feel going into this fight is on another level.”

His last attempt at winning a middleweight belt resulted in him being stopped by WBA 160-pound champ Gennady Golovkin (27-0, 24 KOs) in round seven of their title fight at Madison Square Garden in January. Rosado was cut above both eyes early in the fight, yet put on a spirited performance before the stoppage. He believes the lessons he learned that night will come in handy against “Kid Chocolate”.

“The main issue I was having was the fact that I couldn’t see,” said Rosado. “I’ve always known that I had heart, I always knew that I wouldn’t quit. But that night I learned that I belong here. I got a taste of fighting for a world title and I told myself I had to get back there. I think that experience is going to be a big factor going into this fight.”

Golovkin faces a stiff test of his own when he takes on Brooklyn’s Curtis Stevens (25-3, 18 KOs) on November 2 at the Garden. It’s a fight in which Rosado favors “GGG”.

“When it comes to technique I’m leaning towards GGG,” Rosado said. “I don’t say this to disrespect Curtis because he’s got his shot, but I think GGG is the better fighter.”

Throughout history Rosado’s hometown of Philadelphia has been known as a boxing Mecca in the United States. It’s produced legends like Hopkins, Joe Frazier, Sonny Liston, Bennie Brisco, and Meldrick Taylor, along with staging many high profile fights at the Spectrum. But in recent memory, when it comes to sustained success in the ring, Hopkins has all but solely represented the city. Rosado believes its problem with producing stars has been the tough competition within the local club circuit.

“I think the problem in Philly is that when guys are coming up and undefeated they put them to fight each other on these club shows out here,” said Rosado. “So these guys beat the shit out of each other for 800 dollars at a club show and they’re never able to go on and do big things. It’s because of bad management.”

“The City of Brotherly Love” hasn’t staged a big time fight in decades, but there has been resurgence in its production of talent.

“I think Philly has the best fighters,” said the middleweight contender. “You got a champion in Danny Garcia and I’m going to be a world champion. You got Jesse Hart, Julian Williams and Bryant Jennings who are all undefeated. And you still have the head honcho Bernard Hopkins. So right now Philadelphia is going back to what it used to be.”

“Those are commercial man, the best cheese steaks in Philly are the ones in the hood and most of the time a Mexican guy made it,” said Rosado while laughing.

Young boxers are often coddled by promoters and put in with light competition on their way to a title shot. But Rosado’s earned it the hard way having competed against Golovkin, Alfredo Angulo, Jesus Soto-Karass, and an undefeated Fernando Guerrero. A case can be made that he’s fought tougher competition than Quillin himself, who because of Golden Boy Promotions continuing feud with HBO hasn’t had access to other top middleweights.

In the past when fighters fought more than two or three times a year it was common for a champ to have a few losses on his record. With the way the sport is formulated today, six defeats will often place under the status of “journeyman”. Yet Rosado has continued to put himself in a position to contend for world titles in two different weight classes. He credits his exciting style and a loyal fan base with keeping his name alive.