Some boxing fans appreciate the finer points of the game and the certain things, which can make this complex and often dark sport, become ‘the sweet science’.

However most, if not all, boxing fans enjoy a good old fashioned slugfest, when two fighters go toe-to-toe, and test each other in the most basic, yet thorough ways possible. 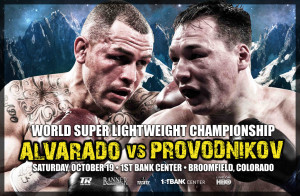 When Mike Alvarado 34-1(23kos) and Ruslan Provodnikov 22-2(15kos) meet in the ring this Saturday, October 19, at the 1st Bank Centre, in Denver, Colorado, they are expected to take part in just such a slugfest. Indeed, so confident are observers about the potential of this clash, that it is already being seen as, possibly, the fight of the year.

Both fighters have the reputation of being no-nonsense warriors, who leave it all in the ring every time they fight. Added to this is the fact that each man is coming off a career highlight fight which has cemented their reputation with the fans, in the boxing community. Mike ’Mile High’ Alvarado is coming off the two most important and high profile fights of his career, his two wars with Brandon Rios, losing the first via 7th round stoppage last October, but then, winning the rematch on points in March.

Just two weeks prior to Alvarado’s point’s win over Rios, Provodnikov had his own breakout fight, when he dueled with Timothy Bradley for 12 wildly exciting rounds, in a fight, which is still considered by many to be the fight of this year (perhaps a few other years as well!)

In the end, although the Russian came out a points loser against Bradley, it was one of those fights in which there were no real losers (a bandwagon that Bob Arum himself was quick to jump upon post fight) and Provodnikov’s status within the sport rose considerably.

Now, both men are set to face each other, in what is for many boxing fans, a dream fight come true. There may be a lot wrong with boxing, in many areas, but at the moment, the light-welterweight division is the hottest division in the sport, and in serving up clashes like this one, (just months after we had Lucas Matthysse vs. Danny Garcia and Marcos Maidana vs. Joseito Lopez) it is helping many fans keep their faith in the sport.

This match is for WBO World light-welterweight title, after Alvarado won the ‘interim’ version of the title in his rematch with Brandon Rios. However, the truth is, the title itself is meaningless to most of the people who are looking forward to seeing this fight. These two men could be fighting over a bag of crisps and they would still be filling up the 1st bank centre. In an era flooded by spurious titles, many fighters have now transcended the meaningless belts, for which they often have to fight, true boxing fans want to see real fights, between well-matched boxers, rather than fighters with padded records maneuvered into dubious titles.

All in all, this fight seems almost too good to be true, and perhaps we should guard against expecting it to surpass both fighters’ most recent efforts, in case we end up disappointed. Sometimes fights that have had fans in raptures before the first bell have had them running for the exit before the last. Perhaps, we should not shout too loud when a match-up excites us. Having said that, it is hard to look at these two men, and imagine that when they face each other in the ring, we won’t see a great fight breaking out.

Despite his reputation as a blood and guts warrior, Alvarado is really a boxer-puncher, rather than simply an out and out brawler. He has said, in the build-up to this match that he intends to use his boxing skills to out-maneuver and out-box Provodnikov, much as he did in the rematch with Rios. However although Alvarado has better boxing skills than his Russian opponent, he is no Timothy Bradley, when it comes to speed, and elusiveness. If Provodnikov was able to catch Bradley, like he did in their fight(even when Bradley had got his boxing together after being almost koed in the first two rounds), then it seems unlikely that Alvarado will be able to go through this match without being seriously caught at some point. What happens next may well determine the outcome of the fight.

Provodnikov is more of a straightforward brawler than Alvarado is, and will be conceding height and reach, to the Denver man. Provodnikov showed against Bradley, that he is a veritable Russian tank, with power in both hands. How will Alvarez fare against the punches, which had the iron-chinned Bradley on the floor twice (although one knockdown was strangely ignored!) and out on his feet for much of their fight?

The fact that this fight is at light-welterweight, rather than welterweight, where he fought Bradley, should be in the Russian’s favour, providing he is still strong at the lighter weight. In his first fight with Brandon Rios last year, Alvarado was stopped in the 7th round, after he was overpowered by Rios’ constant pressure, and big punches. Provodnikov has a similar brawling style to Rios, but is arguably bigger and stronger, with a heavier punch. With this in mind, Alvarado should be advised to employ the kind of tactics against the Russian, which brought him revenge against Rios in March.

As stated earlier, at some point Provodnikov will manage to land significantly upon Alvarado, and the question then will be can he ride the storm of the Russians powerful assaults? This fight will be decided by what happens when both men finally stand toe-to-toe. If Alvarado can survive these episodes, then there is a good chance of him jabbing, and fighting his way to a close (and perhaps controversial) point’s decision, in what is basically his backyard.

Unfortunately, as we have seen already this year, having the home advantage in such a tough fight as this can be the difference between victory and defeat, especially where the judges are concerned. This is really a homecoming fight for Alvarado (albeit a very tough one), and having the home advantage, will be a significant point in Alvarado’s favour.

Provodnikov’s best chance of victory looks to be via a stoppage or knockout, either of which is a possibility for a fighter who is dangerous, both early and late, in a fight.
With both men also prone to facial damage in their bouts, there is always the possibility of cuts coming into play, and affecting the outcome of the fight.

This is a huge match for both fighters, with the winner going on to further ‘super fights’ in this dynamic division, while the loser will inevitably find himself slipping down in the pecking order.

Conceivably, this match could have several possible conclusions. The surest thing is that it is unlikely to be boring or for the faint hearted, and may well be another fight of the year candidate. Just don’t say it too loudly…yet!