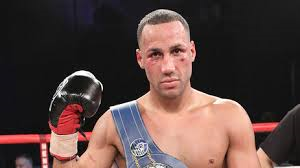 Despite few relevant challenges as a pro, DeGale is knocking on the door of his first world title shot. DeGale currently holds the WBC’s minor Silver belt, and he may be in line for a shot at current titleholder, Sakio Bika. After an extensive amateur career and 2008 Olympic campaign, DeGale was a hot commodity when he turned pro in 2009. After only six fights he was fighting for a minor WBA belt, and only two fights later he was in line for the BBB of C British super middleweight title, then held by Paul Smith. DeGale stopped Smith inside of nine rounds, but would go on to lose a close majority decision to George Groves only two fights later. Since the loss to Groves, DeGale has won six straight, with his last win being over Croatian journeyman Stjepan Bozic in June.

Challenger Dyah Davis comes into Saturday night’s fight having fought only once since last June, when he was stopped by Sakio Bika in the tenth and final round of their super middleweight eliminator. Davis returned this August with a win over a badly faded Antwun Echols, who had lost six straight by way of knockout coming in. Over the last couple of years, Davis has faced a respectable level of competition. He holds wins over Osumanu Adama, Marcus Johnson, and Alfonso Lopez, but has come up short against Bika and Aaron Pryor Jr.

DeGale is the more athletic of the two. He tends to rely too much on his athleticism and reflexes, and may even be under the impression he’s quicker than he is. He’s a natural southpaw but he can fight from the conventional stance. DeGale knows how to put his punches together and score points, but a lot of his punches are more flash than bang. Defensively he can be hit. He often fights with his lead hand at his waist, and he is vulnerable to short, quick leads from this stance. DeGale will often find himself along the ropes where he’s able to slip some punches and fire a few back while ducking and dodging.

Davis possesses good boxing skill and a good amount of hand speed to go along with it. He can slip punches and counter, and even let his hands go in combination. But his tendency is to go away from throwing in combination and rely on one or two punches. Davis is a pretty straight up one-two guy, who only occasionally mixes in left hooks and the occasional uppercut.

Davis, the more experienced fighter and underdog in this fight, would like nothing more than to once again play the spoiler and put himself back in line for a possible rematch with WBC super middleweight belt holder Sakio Bika. He’ll be up against a younger, slightly more athletic fighter and in his backyard on Saturday night. Davis, at times, has stalled when under the bright lights, while DeGale (aside from his trip-up against Groves) is more accustomed to being the attraction. While Davis possesses the tools to deal with a southpaw, he’ll be up against a more confident and athletic fighter, and his tendency to settle into the uncomfortable rhythm of fighting in one-and-two-punch spurts will allow DeGale to rack up the points on the way to a comfortable decision win on Saturday night.